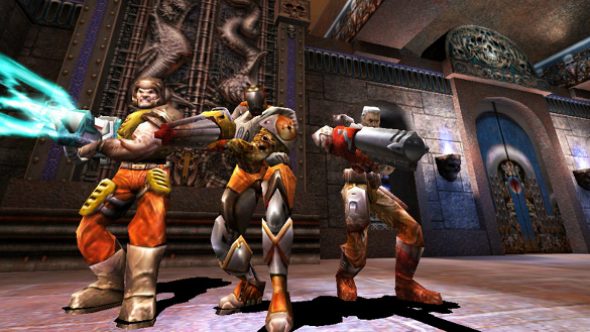 Quake III bots can now reliably beat some of the best human players at games of Capture The Flag. That’s thanks to Google’s DeepMind, a subsidiary of the internet giant that focuses on the development of artificial intelligence. They’ve trained 30 AI bots to play the game at a level far above that of the most competent humans.

It’s a very scattershot approach. The bots aren’t taught to play the game through learning a conventional ruleset. Instead, they simply compete against one another in a trial-and-error approach, using procedurally generated maps to ensure they’re not just learning one strategy.

Robots might not beat you at every titles on our list of the best FPS games. Yet.

From there, they just do the same thing, over and over again. According to The Verge, Deepmind’s AI played a total of 450,000 games of Capture the Flag, each lasting five minutes each. That’s the equivalent of a little over four years of play. Over time, the teams not only learned the basics of the mode (i.e. to capture the flag), but how to guard their precious quarry, how to work together as a team, and, most worryingly, how to camp the enemy spawn.

At the end of the testing, DeepMind held a tournament, with two-player teams including a mixture of bots-only, humans-only, and bots and humans. The bot-only teams ended up with a 74% winrate, far above the 52% win rate of even the strongest human teams involved. It’s worth noting that larger bot-only teams had a lower win rate, around 65%, but those are still pretty good odds.

In terms of ELO rating, the DeepMind bots topped out at just under 1600 after their training games. By contrast, good human players have a rating of just over 1300, while average human ratings are around 1050.

Quake III is just the latest in a strong of games that researchers are developing top-level AI for. In fact, Elon Musk’s OpenAI isdeveloping a team of Dota 2 bots that it’s hoped will be able to beat the best teams at this year’s International. If they do win, who Valve will let keep hold of the trophy?