I’ve eviscerated so many mutants into cascading showers of gibs I’ve almost forgotten what a fully-formed one looks like. In Rage 2, a gang of these monstrosities go from happily comparing grisly appendages – or whatever it is that mutants actually do in their spare time – to an eruption of crimson confetti in seconds, wiped out before their guns have even hit the floor. Gibs are here. Gibs are there. Chances are you’ve got some behind your ears by now, too. Gibs are everywhere. Rage 2 is utter gibberish.

Id Software and Avalanche Studios want you to revel in this indiscriminate massacre. Overdrive – an incandescent high that bathes your senses in a vivid, inflamed pink with a roar of unrelenting anger – is the climax at which you indulge a base desire for messy execution you never knew you had. In this boosted state, weapons spray quicker and reload instantly, power cooldowns all but disappear, and guns fire, well, actual fire. The more you maim and the quicker you kill, the longer you’ll be intoxicated by this heady concoction of nitrous for the bloodthirsty.

Eventually you’ll be thinking not one, but two, or even three steps ahead of whatever poor sod stands in the way of your voracious violence. Once one is annihilated in a geyser of viscera, you leap to the next in the blink of an eye, razing them in a hellish inferno with the snap of a finger. Your repertoire of irresistible tools for destruction combine to create symphonies of slaughter again and again and again. You’ll want bigger and gorier and more of it all. That’s until the high subsides and the comedown commences.

Rage 2 takes the hyperactive ultraviolence of Doom 2016 and takes it guns blazing, tyres screeching into the large open world of Earth in 2029. The viscera-stained hands of id are all over it: getting behind the sights of Rage 2’s arsenal is just like sliding back into Doomguy’s combat suit. Each boomstick has an immensely satisfying heft to it and choosing which one to use for any fight is a painful dilemma.

An early highlight is the combat shotgun, which is much more fun than its name suggests. When aiming down its sights it pulsates like a lizard flaring its neck, ready to spit gore with an unstoppable, heart-pounding boom. With the Firestorm Revolver you can shoot a few rounds and detonate each at will, allowing you to set devilish traps on the red barrels strewn around.

If you just can’t get enough of Rage 2’s inviting Nanotrites and ridiculous guns, the developers will be supporting the shooter for the rest of 2019 and beyond. ‘Wasteland Challenges’ offer collective community goals, ‘World Events’ introduces a pilotable mech and a giant mutant voiced by Andrew WK, and there’ll probably a gargantuan sand worm to fire rockets at, too.

Throughout your adventure you’ll hoover up resources to upgrade pretty much everything. In Rage 2, even your upgrades have upgrades, meaning you can make yourself so overpowered you may well find yourself upping the difficulty. Balance is for the faint-hearted, anyway. The variety of enemies, however, is rarely able to keep up: some have armour and others don’t, and that’s about all you can discern as they stand their helplessly while you perform your frenzied concerto. You’ll face similarly bland bosses now and again, too.

But the guns are only half the picture: it’s in combination with the gloriously chaotic Rage 2 Nanotrite abilities that transform your Ranger wannabe into a divine super soldier. With Shatter – which is basically a force push from Star Wars but with extra body bits – you can finish off enemies already ablaze and devastate the rest by landing an almighty punch to the ground from above with Slam. Suspend foes in the air with Vortex and lock-on before turning them to irradiated dust with the Smart Rocket Launcher. If murder could be an art form – it’s not permissable in modern galleries, I checked – Rage 2 would lead the movement. It’s the psychotic creativity the game encourages that makes the opening hours fly by. 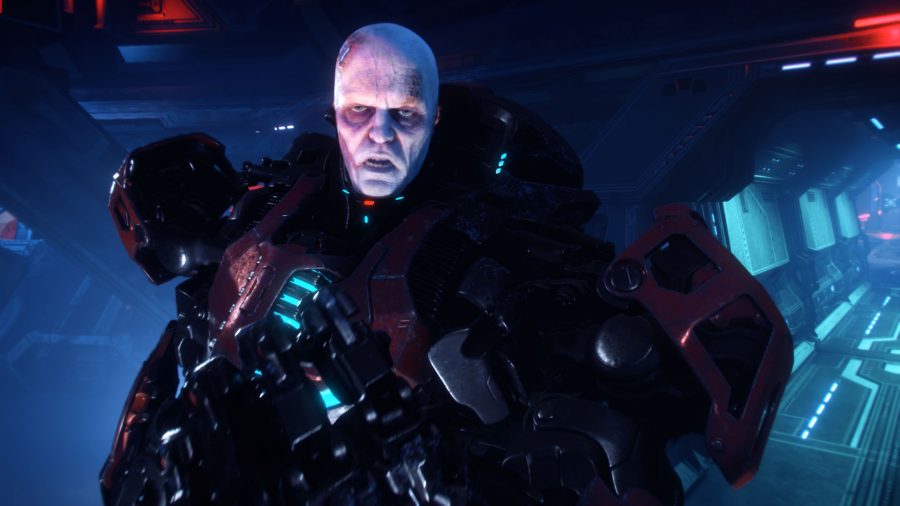 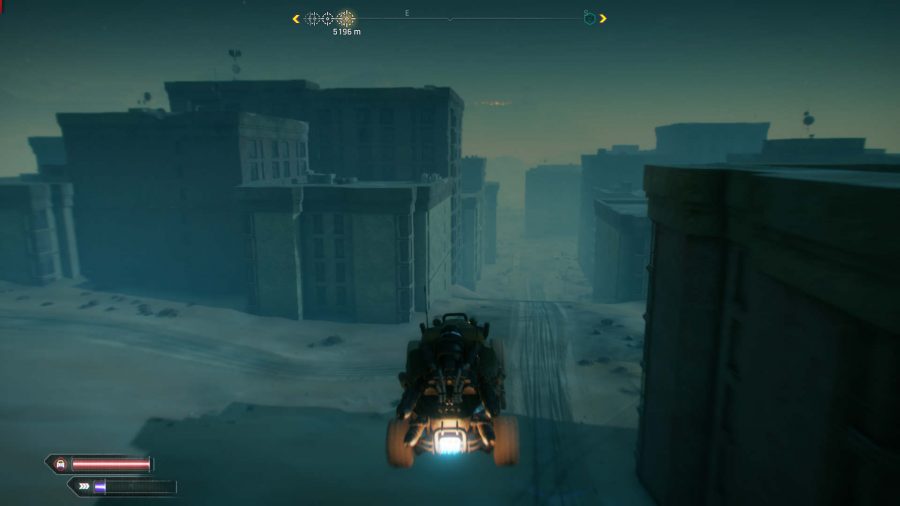 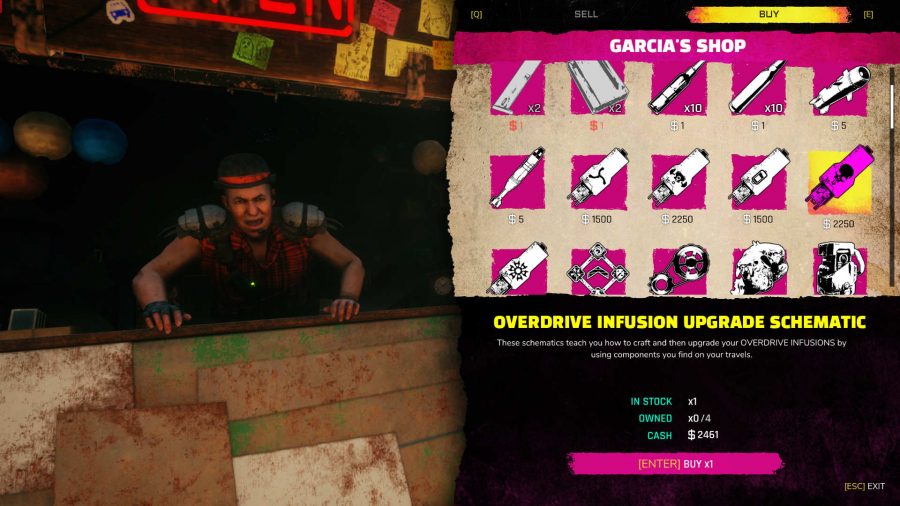 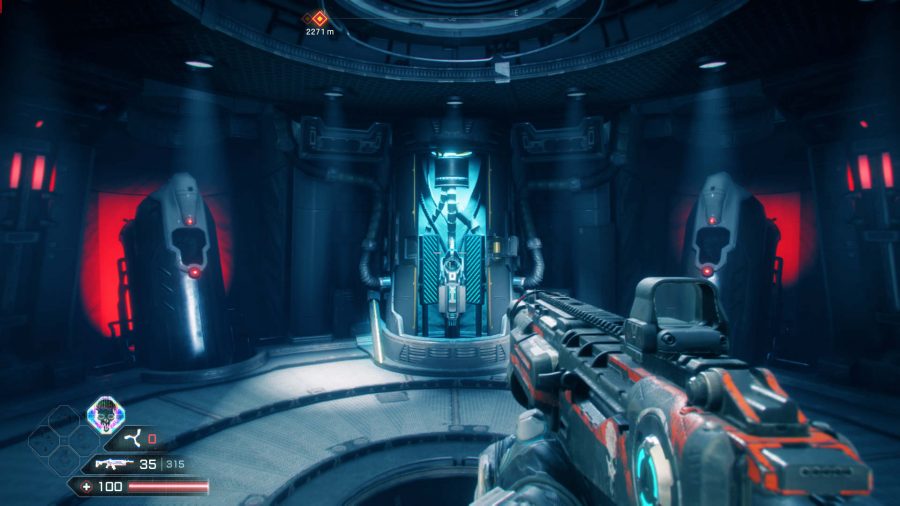 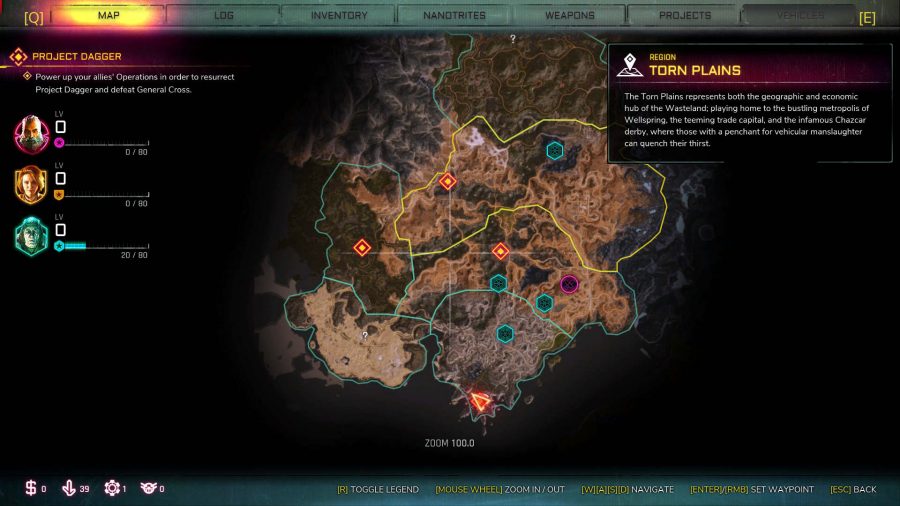 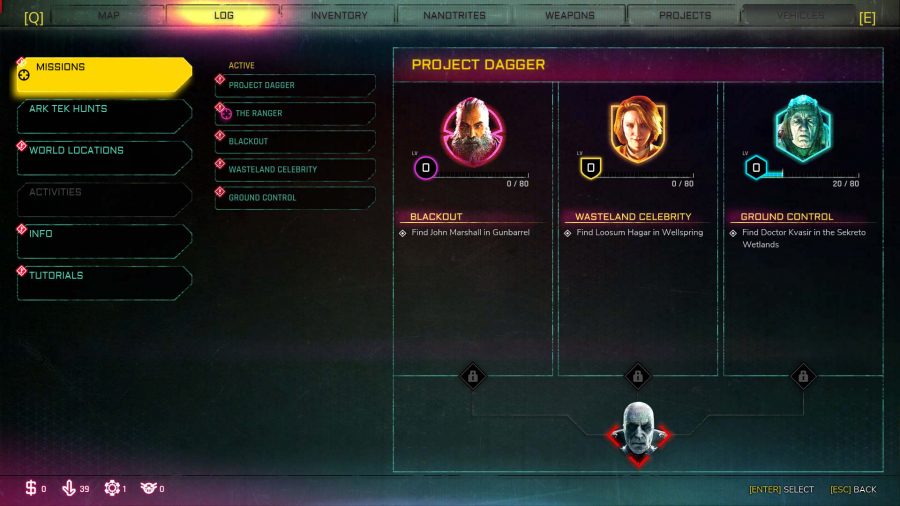 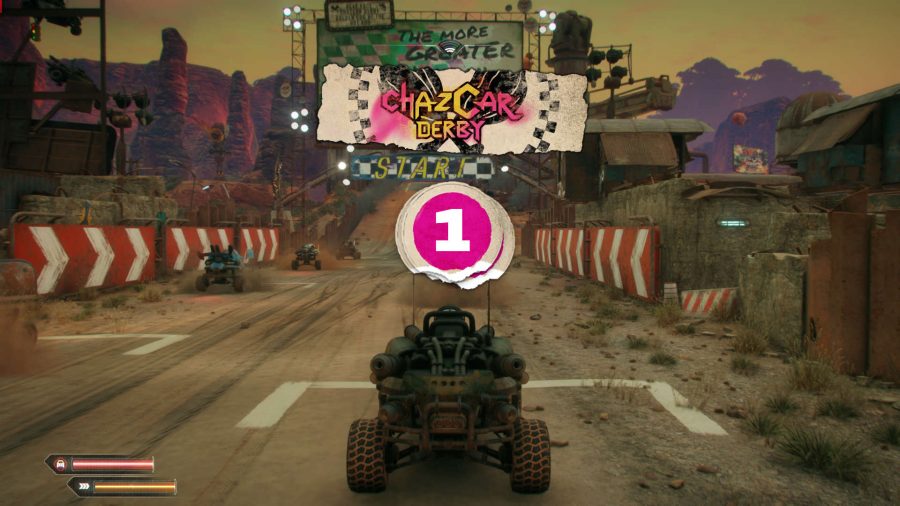 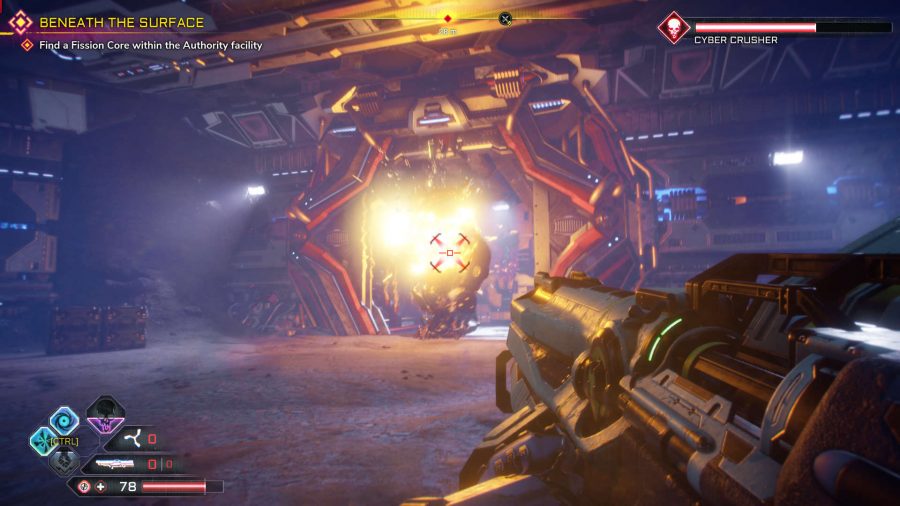 Gib me a break

Sadly, the staid open world proves an unworthy frame for the joyous chaos of Rage 2’s combat. The wasteland is of a size we’ve come to expect from today’s crop of open-world games, with the typical checklist of uninspiring busywork to tick off. Outside of main missions most amount to ‘go here and kill the thing’: there are outposts – or ‘Bandit Dens’, in this case – and spots where you need to destroy X number of monster nests or fuel barrels. The exception are Ranger Echoes. These opportunities to piece together the final moments of fallen comrades offer very light but refreshing puzzles and platforming, a little like Far Cry 5’s Prepper Stashes.

Core quests are where Rage 2 shines brightest in gameplay terms. These more focused missions evoke the likes of Doom 2016 the most, which always works in the game’s favour. They take you to areas with more enthralling mission design and let you go nuts with your abilities for longer; the staccato rhythm of shorter missions elsewhere means you’ve often finished the mission before you’ve properly got going. Unfortunately main missions are few in number and level gated, forcing you to churn through your more wearisome side tasks. That said, if you’re tiring of the side-mission grind, you have the freedom to find a new power or gun whenever you like.

But the missions can only make up for so much. Unfortunately, the story and writing is unsalvageable. You play as Walker who – regardless of whether you choose them to be male or female – is essentially a walking assault rifle, and little else. When the evil Authority, led by big baddie General Cross, descends on your home and leaves it in tatters, it’s up to you to gain powers and guns from special Ranger facilities known as Arks and, well, you get the idea.

Every time you approach a side task Walker comments “another Authority Sentry” or “another Bandit Den.” What is intended to stress the supposed enormity of the task ends up highlighting how repetitious your objectives can be. The game’s tone is off, too: it’s hard to identify with a character’s 20-hour anger bender when also finding boxes of fake moustaches, copies of Playmutant Monthly, and NPCs called Buyone Getonefree and Gobshite.

The size of Rage 2’s map will please those who want their buck to go as far as possible, as it also makes room for driving, racing, and vehicular combat. However, as with the original Rage, getting behind the wheel in the sequel rarely thrills. Whether they’re small race cars or Batmobile-grade tanks, Rage 2’s vehicles feel heavy and unresponsive, which makes journeying between missions a chore and makes the size of the map hard to justify.

There’s not a lot to see on the way, either, save for pitched battles between raiders and ‘muties’, despite the efforts made to divide the setting into three distinct biomes: forest, desert, and swamp. Rage 2’s future Earth lacks the personality of Far Cry 5’s Montana or Fallout 4’s Boston. Avalanche Studios is known for its open worlds, but this won’t be one of its most celebrated.

Rage 2 is also a characteristically Bethesda game in that it suffers from copious bugs. I’ve had NPCs disappear mid chat and experienced frequent crashes. I even endured a game-breaking hitch when my progress for one of the key characters stopped being recorded, preventing me from progressing one of Rage 2’s main missions. 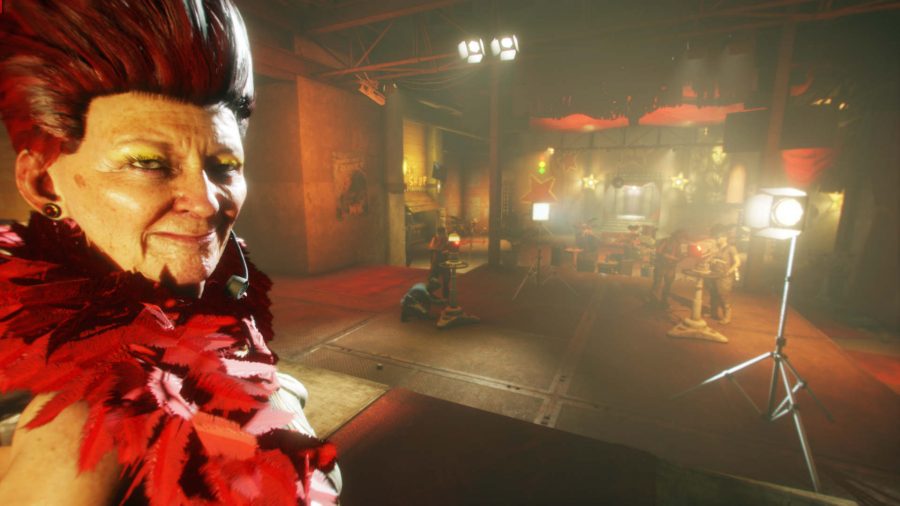 Rage 2 has plenty of problems, but the vast majority are structural – it’s about the packaging rather than what’s inside. The pace and bite of an id shooter is watered down by the sprawl of a monotonous open world that encourages stop/start rhythms and fails to allow the game’s exquisite combat the chance to shine.

The tedious story, tiresome characters, and tonal dissonance emerge when you put your thinking cap on, but Rage 2 is at its strongest when you devote every inch of your grey matter to dispatching your targets in the most inventive and gratifying ways imaginable. It’s a game about experiencing the chemically-enhanced here and now, without wasting a thought that could be spent on killing.

In other words, this is a sequel all about excess, and not always in the right ways. The insatiable appetite for more noise, more colour, more guns, and more map miles is exhausting, but also intoxicating at times. In the end, Rage 2 is a game that appeals not to the critical, cerebral super ego, but wholly, unapologetically, to the id.

The pace of id and Avalanche’s FPS is neutered by a dull open world and thin story but, in an unbridled whirlwind of gruesome gibs, you probably won’t care.