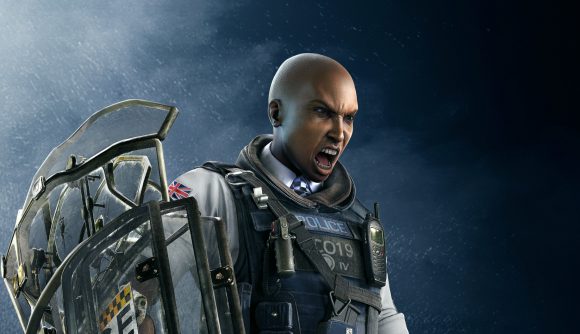 Clash is about to be back in Rainbow Six Siege. The operator was disabled (again) after a shield glitch that could give players a competitive advantage was discovered (again). She’s set to return as part of the Rainbow Six Siege 4.2 patch notes, and the devs plans to announce when that update will land – as well as what it will contain – soon.

“The Clash exploit will be fixed with the 4.2 patch and she will be re-enabled at that time. More news on the Y4S4.2 patch will be provided later,” Ubisoft says on Reddit. “We appreciate your patience and understanding with us through the holidays! Our girl will be back in action soon!”

Clash was most recently disabled on December 12, 2019, and while the developers didn’t detail the issue, players had just before discovered an exploit that would make it appear that Clash had her shield out, when she actually had the gun equipped. It’s similar to the glitch that got Clash disabled in the first place, and would certainly give you a chance to catch opponents unaware.

“There will be other things in the patch,” according to UbiNoty on Reddit, so don’t expect 4.2 to be all about the Clash comeback. (Who knows, maybe she’ll have to make yet another comeback in the future.)

Rainbow Six Siege is one of the best FPS games on PC, but you can find plenty of other options at that link for when your favourite is taken out of rotation.