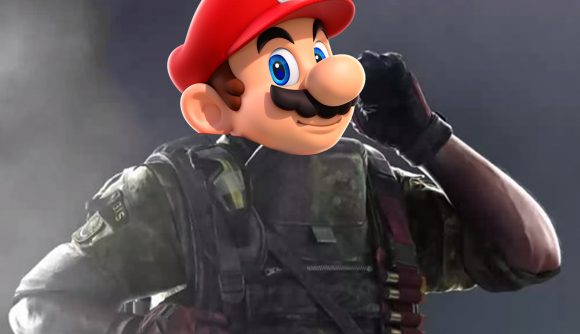 Rainbow Six Siege has a massive cast at this point, and it’s only going to get bigger from here. So how do the developers keep coming up with new ideas for characters? Turns out that it’s the same as any creative pursuit, and there’s a whole lot of borrowing from pop culture and other media – to the point at which you can specifically thank Attack on Titan, Mario, and torture documentaries for bringing some of the Rainbow Six Siege operators to life.

As you might’ve guessed, Maestro is Mario – at least according to art director Alexander Karpazis, who says “I can confirm that we took a little bit of inspiration from a famous Italian plumber for his look.” (Hey, at least it’s less egregious than Ubisoft’s other Mario moment.) Karpazis gives a breakdown of the inspirations behind every Siege operator in a video for Wired, and there’s plenty of notably weird stuff in there.

Amaru, meanwhile, was known as the “Attack on Titan operator” during development, after the anime’s omni-directional mobility gear – perhaps a more accurate comparison for the op’s gear than a simple grappling hook.

You can see breakdowns of every operator in the full video below. (They’re presented in alphabetical order.)

Things get a bit darker with another operator – Caviera’s torture-filled backstory meant some uncomfortable research, even relative to other FPS games. “We watched documentaries about BOPE interrogation sequences, which are absolutely brutal. Interrogation techniques can vary from a knife to the throat, to waterboarding, or putting a bucket over someone’s head and beating it. So what you see in the game is actually a toned-down version of BOPE interrogation.”

But it’s not all about realism, either – as was the case with Twitch. Karpazis says “there had never been in the history of GIGN a female operative. And this was actually an important moment for Rainbow Six, where we decided that it was more important to value representation and diversity versus basing it off of real life. Twitch is essentially the first female GIGN operator.”