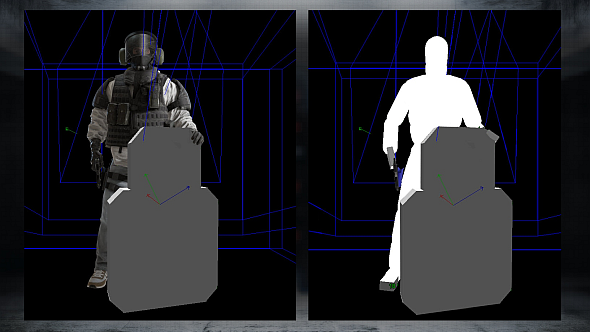 Rainbow Six Siege’s update 2.2.1 is currently live on the technical test servers, and one of the key changes is the refactoring of hitboxes such that hits will only register if they connect with the human body, rather than the (often bulky) equipment that Rainbow Six Siege’s operators wear.

Ubisoft have now shared a little more detail on this in a new announcement, explaining why the decision was taken.

Basically, operators need a bit of visual flair to differentiate them from one another and to let Ubi’s artists get creative. With hitboxes extending to their equipment, imbalances began to arise: “A good example of this is Frost’s collar, which we ended up removing from her hitbox because it made her too easy to hit.”

That, in turn, led to inconsistency and confusion about which parts of newer operators would register damage, leading to Ubi’s idea to make only the body vulnerable. The next phase of changes will add feedback of a different kind if you hit parts of the operator that aren’t receiving damage: “so if you hit a metallic accessory (like IQ’s headset), you’ll see a spark visual effect and hear a ricochet sound.”

There’s no ETA on that second change, but update 2.2.1 is due to hit the live game tomorrow. For more on what it includes, click here.