A tab in the Rainbow Six Siege client, posted roughly 20 hours ago at the time of writing, read “Outbreak dates revealed.” Unfortunately, it didn’t actually confirm the dates, and clicking through simply took players to the Operation Blood Orchid blog page. The tab now appears to have been fully removed from the client. 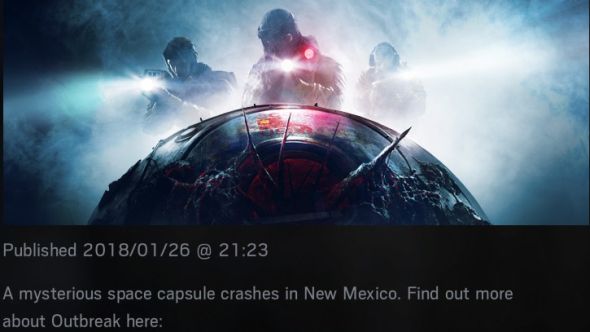 What the tab did show, however, was an image relating to the event, with the caption “a mysterious space capsule crashes in New Mexico.” The image shows a large metal sphere in the foreground, with spikes (a lot like those visible on pictures of Outbreak’s monsters) emerging from a hole in the front, and some webbing-like material around it. The sphere also displays the flag of the Soviet Union, with the initialisms CCCP and USSR also visible. That implies that the ‘mysterious space capsule’ is an old Soviet satellite, which was potentially brought down by an alien presence.

Behind the satellite are three operators, two of whom seem to be the new French and Russian bioterrorism operators. All three operators are also clearly using mounted flashlights, suggesting that these will also be usable in the new mode.