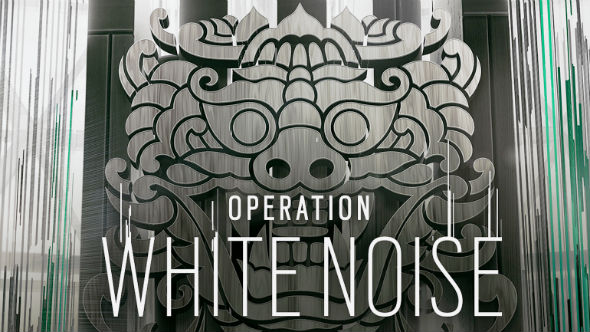 The last update of Rainbow Six Siege’s second year, Operation White Noise, is on the Technical Test Servers now and will go live next week. You can learn all about the new content – operators and whatnot – in our rundown, but we also need to discuss the technical and cosmetic side: balance changes, bug fixes, and skins. That’s what we’re here to do.

Jumping into Siege for the first time? Here is our list of the best starter Operators.

Mute gets an elite set this season inspired by F Squadron – also known as Phantom – a renowned reconaissance unit of the SAS formed at the outset of World War Two. Each elite set is Operator-specific, and includes a distinctively themed Uniform, Weapon Skin, Gadget Skin, Chibi Charm, and Signature Victory Animation.

This Operation has had its gameplay improvements split into four main categories. Here are the highlights from each category:

Ubisoft will start testing a new synchronisation logic for some projectiles – primarily grenades. The goal is to fix issues where a grenade would desync on the game client and suddenly teleport back. The change allows the devs to align the trajectory between what the server sees and what you see on your client, which will reduce the chance that your grenade will return to you after releasing it.

Player velocity will also be considered when throwing a grenade, so moving while throwing it will alter its trajectory in various ways. The initial velocity of the grenade will now be combined with the thrower’s movement velocity at the point of release, which will have the following effects:

This change was initially made because Ubisoft found it made grenade throws feel better with the new synchronisation logic, but they also welcome the results of playtests, which suggest it adds depth and player control to grenade throwing.

This feature is experimental on the TTS right now, so give it a try.

Ubisoft have changed the pistol animation for greater player comfort. Before this change, you always had to aim down the sights because the animation would make the barrel of the pistol lift up in the middle of the screen (where the bullet goes). As a player, you would then have to guess where the enemy is. This issue was especially problematic if you were aiming for the head. This should be easier now.

The rate of fire of all pistols has also been increased, making them more lethal. Ubisoft say their overall goal with these changes is to make pistols a true choice for players, rather than a last resort when you are out of bullets.

Ubisoft are introducing buff and debuff indicators on the UI HUD. This will allow for better visualisation of when you, for example, have Rook armour, or step on a Lesion mine. With the new visual unification of all effects on the player’s character, this means anything you have applied to you is now displayed.

There also is a colour code:

And finally, there’s an epic list of bug fixes. Here are some highlights, but you can read through the full saga on the Siege website here: