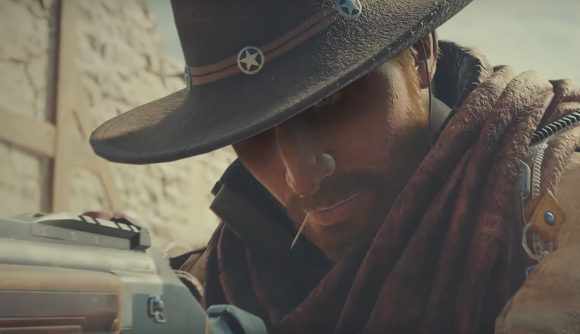 Rainbow Six Siege Showdown is here, confirming all those leaks about a Wild West-themed mode coming to the game. It’s a 3v3 Secure Area affair, and it takes place on a brand-new outdoor map full of proper Western theming. The mode is live now, and will run until July 16 – and, naturally, there are plenty of new cosmetics to grab along the way.

Showdown pits three Attackers – chosen from Twitch, Ash, Capitao, Maverick, or Glaz – against three Defenders – Maestro, Alibi, Rook, Kaid, or Caveira – against each other, armed with only the BOSG 12.2 and Magnum LFP586. In addition to the new Fort Truth map, the mode also strips down the hud – including crosshairs – and axes the preparation phase.

You’ll see all the appropriate Rainbow Six SIege operators in Western duds throughout the mode, and you can unlock those cosmetics for keeps with a new set of Showdown packs. There’s a total of 31 Western items included in the collection, and you’ll get a free pack on your first login, and for completing a Ubisoft Club Event challenge.

You can see more in the trailer below. (As always, here’s a UK mirror for the region lock.)

There’s also a video preview of many of the new cosmetics.

Rainbow Six Quarantine proves just how valuable some of Siege’s limited events can be – maybe someday we’ll be looking at a standalone Wild West Rainbow Six.