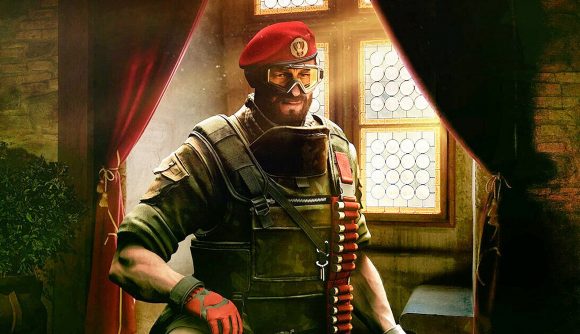 Rainbow Six Siege has a new test server update live now, and it’s a big one. The TS update includes some big nerfs for Maestro and for every gun in the game, as well as some buffs for Ela, Nokk, and Dokkaebi, among others.

Firstly, the patch notes say developer Ubisoft is increasing the aim-down-sight time for all weapons, as the current times are a little too quick thanks to a previous animation overhaul. Every weapon in the game will see its ADS time increase by 0.05 to 0.25 seconds, depending on what type it is.

Maestro’s nerf is also significant: Ubisoft is removing the ACOG scope from his ALDA LMG. The developer says: “We think the ALDA is powerful even without the ACOG and want to see if it’s removal will highlight its other great qualities.” Jager is another operator to be nerfed; his 416-C assault rifle sees its damage reduced from 43 to 38, as it currently “outperforms all other guns on defence”.

On the other hand, lots of operators are being buffed in the new update. Dokkaebi can now hack Echo’s phone and drones, for example, while Ela’s Scorpion Evo3 SMG will have lower initial recoil going forward.

Finka’s Spear .308 and Nokk’s FMG9 each get damage buffs of four points, meanwhile, and Ying’s Candelas should be distributed more evenly and reliably. Finally, the ADS penalty specific to Blackbeard will now only apply when his gun shield is equipped – when it’s not, his ADS times will remain the same as any other character’s assault rifle.

It’s important to remember these changes are currently live on the test server anyway – but there’s a good chance they’ll come to live servers down the line.

Elsewhere, the Rainbow Six Siege Road to SI 2020 event is live. It adds a new map, Stadium, for the next five weekends leading up to the Six Invitational on February 14. Siege’s Year 5 pass also leaked just recently, and it now contains fewer operators than before.