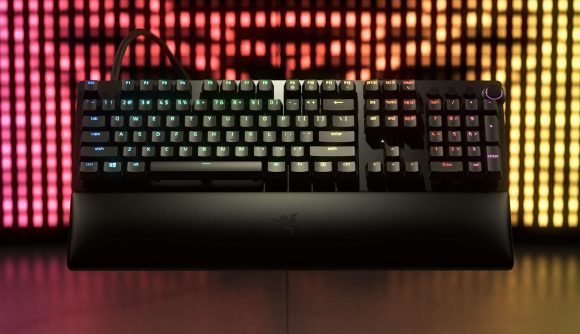 While many swear by the tried and tested combination of the best gaming keyboard and best gaming mouse, there are some situations where using the best PC controller just makes more sense. After all, its triggers and sticks give you way more control over vehicles or the speed at which you move. There have been a few keyboards that emulate the analogue sticks of a gamepad over the years, such as the Cooler Master MK850 and Wooting Two, both of which are now joined by Razer's latest offering: the Huntsman V2 Analog.

To the naked eye it looks very much like Razer's original Huntsman Elite, but it's one of the most intriguing keyboards we've seen released so far this year. And unlike Cooler Master's MK850, this analogue function is on every single key instead of being limited to just eight keys. So, you get the precise movement of a controller combined with the superior aiming accuracy when paired with a mouse, perfect for games like GTA. There's still some games like Dark Souls where a controller will still reign supreme, however.

On top of that, Razer has added 'adjustable actuation', letting you change the keystroke length from 1.5mm, great for rapid succession of keys in FPS games, all the way up to 3.6mm. This is something we've already seen from SteelSeries on its Apex Pro keyboard, although it didn't have an analogue function.

The board also has what Razer calls ‘dual-step actuation’, letting you program two macros into a single key depending how far you push the key down. This is something we haven’t seen on any other keyboard so far, but it is reminiscent of the Swiftpoint Z mouse.

And to round the Huntsman V2 Analog off, the new switches pack optical technology rated at 100 million keystrokes across their lifespan. This makes it faster than a conventional mechanical switch, and it should last far longer.

Those fancy analogue optical switches mean it’s not going to come cheap, though, at $249 / €279. It’s already available on Razer’s store, and will be available at other retailers from February 9.