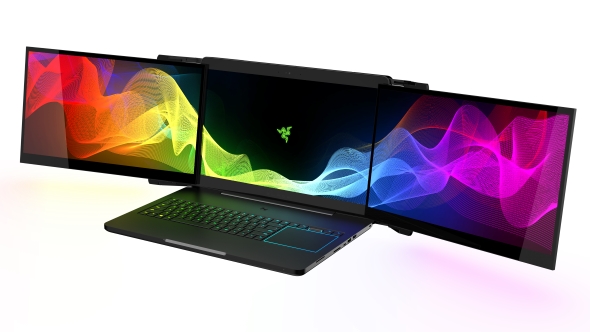 Update January 10, 2017: Razer have confirmed it was a pair of the triple-screen Project Valerie prototypes that were stolen from their CES press room on Sunday. Turns out you really can’t trust the media…

Want to block out this crazy world with a good set of cans? Check out our pick of the best gaming headsets around today.

They have also released an official statement on the matter as well, offering a $25,000 reward for any information that leads to the arrest of a suspect in the theft.

“This note is to confirm that two Razer Project Valerie laptop prototypes were stolen from the Razer booth at CES. The product was taken from the Razer press room at approximately 4 p.m. on Sunday, January 8, 2017.

A $25,000 reward is being offered for original information leading to the identification, arrest and conviction of a criminal suspect. Razer, in its sole discretion, will decide who is entitled to a reward and in what amount. Razer may pay only a portion of the maximum reward offered. The decision will be based primarily upon law enforcement’s evaluation of the value of the information provided. When there are multiple claimants, the reward will be shared in amounts determined by Razer. Razer associates are not eligible for the reward.

This reward offer is good for one year from the date it is first offered, unless extended by Razer. Information about the theft can be sent to [email protected] Razer will not publicly disclose material that it receives or details about respondents, except to those persons with whom Razer is directly working to resolve this matter or as may be required by law.”

Update January 9, 2017:What happens in Vegas doesn’t necessarily stay in Vegas as two of Razer’s prototype designs were stolen from their booth at CES today and could now be anywhere.

Razer CEO, Min-Liang Tan, took to Facebook to announce the news, suggesting that there’s a chance it could have been a jealous competitor wanting to get an in-depth look at Razer’s prototype designs.

“I’ve just been informed that two of our prototypes were stolen from our booth at CES today.

We have filed the necessary reports and are currently working with the show management as well as law enforcement to address this issue.

At Razer, we play hard and we play fair. Our teams worked months on end to conceptualize and develop these units and we pride ourselves in pushing the envelope to deliver the latest and greatest.

We treat theft/larceny, and if relevant to this case, industrial espionage, very seriously – it is cheating, and cheating doesn’t sit well with us. Penalties for such crimes are grievous and anyone who would do this clearly isn’t very smart.”

It looks like the theft might have happened as the Razer booth was being taken down after the show finished yesterday. Whether it was an opportunist strike or a planned theft isn’t clear. But no matter the breach of security it’s a dark time for the gaming brand and a pretty brutal end to what had been a good show for team Razer.

Original story, January 5, 2017: It looks like Razer’s designers have gone full Fear and Loathing at CES this year. I mean, how high would you have to be to come up with the idea of a 90’s scale laptop that unfolds into a triple monitor display? I’m guessing very.

“The complexities of a traditional multi-monitor setup are a thing of the past with Project Valerie,” says Razer co-founder and CEO Min-Liang Tan. “Equally important, the power of a desktop computer and graphics capabilities of three top-end monitors are included in the system. There is no shortcoming in the way of performance in the face of its amazing portability and features.”

It’s almost like they’re taking it seriously. Like Razer are really solving a problem that people genuinely have with their gaming machines. 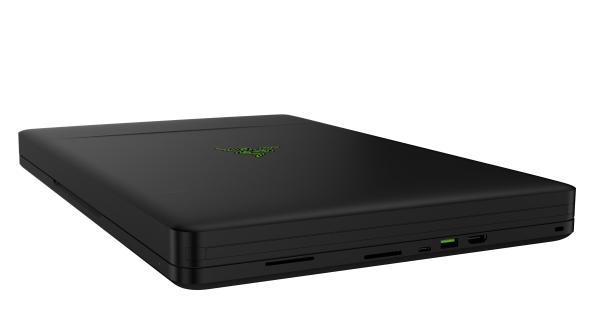 The fact that it can collapse three monitors down into the laptop form factor is impressive, but it doesn’t exactly fold up small. The Project Valerie concept measures 1.5-inches thick when folded away and weighs a hefty 5.4kg. But then it’s one thing to imagine lugging this thing around in a backpack, and quite another to consider ‘deploying’ it when you’re sat on a train.

Not to mention that with three screens chugging down the laptop’s juice it’s probably got a gaming battery life measured in milliseconds. That’s also likely to be the length of time those flimsy-looking monitor arms would last when confronted by my technophobic cats.

Speaking of crazy laptop designs… Acer have announced pricing and availability for their Predator 21X. It’s the world’s first 21:9 gaming laptop with a curved 21-inch IPS display running at 120Hz and a pair of GTX 1080s throwing pixels at it. 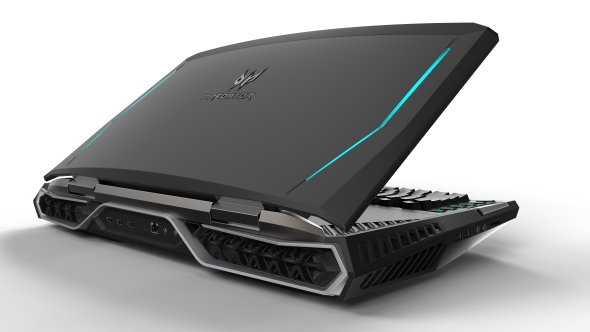 And it will be available in the US from February for a paltry $8,999. The Predator 21X gets to travel the rest of the world in October with prices starting at €9,999. I’m honestly not exaggerating those prices up for comic effect, promise.

Less batshit crazy, but still definitely to be filed in the ‘only-at-tradeshows’ folder, is the Project Ariana projection system. This is nominally tied into Razer’s Chroma lighting system and API and is a high-def projector that communicates with your PC and whatever game you’re playing to push the image out beyond the limits of your monitor. 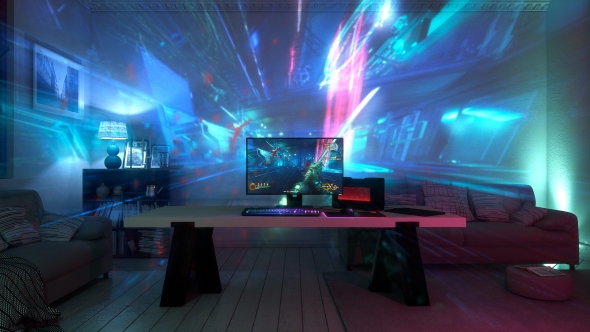 Razer are working with Philips on the system, which looks a lot like an evolution of their AmbiLux TV design. The AmbiLux sets have a set of nine rear-facing projectors behind the screen which beam out onto the wall behind the TV, creating a fuzzy extension of the image, blurring the edges of the panel, immersing you in the picture and filling your peripheral vision.

Both are essentially just riffing off the old Microsoft IllumiRoom concept, but I have to confess I love the idea of extending your game beyond the boundaries of the monitor. This is one Razer concept I am 100% behind seeing make it to market.