Hi-Rez has suffered from an identity crisis in the past with Paladins likened to Overwatch since the day it was revealed. Realm Royale, their substantial rebrand of the unreleased Paladins Battlegrounds, is no different. From the shire scene that greets you at the main menu to massive portions of the map like Badlands – which looks it was lifted straight out of World of Warcraft – right down to the name.

Despite this, Realm Royale doesn’t feel derivative. Its mechanics have been thought through clearly and it’s polished enough to ensure you’re not turned away by technical issues or greyboxed buildings. Most important of all, Realm Royale is packed with tweaks – both big and small in scope – that set it apart from the competition.

Check our Realm Royale tips and see which is the best battle royale game?

At the start of a match you pick one of five classes, each with its own passive buff, movement ability, and suite of class-specific ability pickups. For example, the Mage’s movement ability lets you fly for a short duration, which is useful for extending jumps and traversing rooftops. She is also the only character who can equip Fireballs – a highly damaging spell if you can hit your target. Those perks don’t prescribe your playstyle though and I found the Mage just as effective at zooming into the fray with a sword as she was casting her abilities from afar.

Don’t worry, though, the abilities and classes are not strong enough on their own to turn the tide of a skirmish in anyone’s favour, after all this is a battle royale game: a rock-paper-scissors meta has no place here.

Realm Royale’s most important addition is the Forge. Functioning a little like Fortnite’s Vending Machines, these crafting stations are dotted around the map in busy areas and let you acquire the best weapons, abilities, and armour in the game. Of course you’ll need materials to fuel the process, which can be obtained by dismantling weapon and ability pickups, but you’ll also need to wait around for roughly a minute for the Forge to produce the very best items.

If you want to go into the final few circles with legendary gear then you absolutely have to fight for it. Whereas Fortnite and PUBG’s supply drops can only realistically be acquired by the players lucky enough to be near them as they fall, Realm Royale’s Forges can be found in 18 different spots across the map – they’re always in the same place and are clearly marked on the map. By the middle of a match, you can expect everyone left alive to start converging on these hotspots, which makes using and defending them as difficult as surviving the final safe zone. Hi-Rez has leant into this as much as possible by ensuring everyone in the area knows a forge is active: you’ll be able to hear a loud clinking sound and see smoke rise from its chimney. 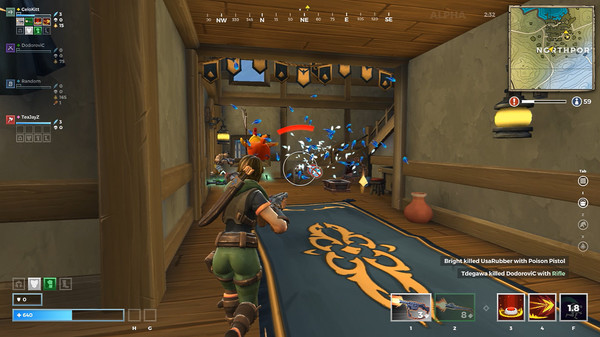 Forges add a real sense of direction to the early and mid-game of Realm Royale. By incentivising quantity of loot over quality you’re coerced into covering as much ground and getting into as many fights as possible. The middle of each match is where Forges come into play and where the number of remaining players takes a nosedive as each Forge becomes a miniature version of Fortnite’s infamous Tilted Towers – that is to say a blood bath. By the time you’re approaching the final few circles you can bet on every player sharing a similarly top tier loadout, which is a far cry from random mess of setups you can expect to encounter at the end of a game of PUBG, where a ghillie suit-clad sniper takes aim at his skillet-wielding prey from afar.

Before we get carried away: Realm Royale isn’t going to usurp Fortnite yet. Its weapons aren’t just lacking in variety, they’re woefully unsatisfying to fire. Likewise, the lack of a solo mode means that your in-game success entirely dependent on random teammates working with you, unless you’ve managed to cajole your friends into downloading Realm Royale, too. It’s a strong beginning, though, and, with every battle royale released so far launching as an Early Access experiment, these issues are to be expected. For now, we can focus on the fact Hi-Rez has come up with some fun and inventive mechanics that make it clear battle royale is evolving.