With practically every developer making a battle royale game these days, it’s hard to separate those worth your time from those that aren’t… maybe we could have a battle royale of battle royales? But we don’t need to come up with a new system, there’s been one kicking around for years that applies to battle royale games just as effectively – Time To Kill (TTK).

TTK is the average time it takes for one player to kill another – to take them from full health to zero. Each weapon has a TTK that can be worked out (as can be seen in this PUBG weapon stats sheet), so you can take an average from that to get an idea of whether a PvP game has a high or low TTK. And when you start totting up the TTKs of battle royale games there’s one that stands out: Realm Royale.

Let’s settle a debate: which is the best battle royale game?

One Reddit user, LvPaladins, has noticed some worrying similarities between the state of the Realm Royale’s TTK and that of another competitive game they used to play – World of Warcraft. This stems from Realm Royale’s classes which, unlike other battle royale games, spread player skill across the use of class abilities, as well as more traditional shooter skills like aiming accuracy and map knowledge.

According to LvPaladins, in the case of World of Warcraft’s PvP – which is all about using class-specific abilities – the TTK was low at first to encourage quick thinking and the use of “outplay mechanics.” However, in response to complaints that the PvP was too hard, Blizzard made the TTK much higher when the Warlords of Draenor expansion arrived so that players had more time to react to their attackers.

The problem was that the changes simplified the game: “all the utility was gone and people were basically hitting each other with wet noodles until someone finally died,” LvPaladins says. World of Warcraft’s PvP has improved since then but it’s still far from what is considered the glory days when it had a low TTK.

For the first weeks of Realm Royale’s lifetime it had a low TTK like WoW’s PvP did in its good old days. Players who put enough time into learning the ropes and finding the best use of defensive, healing, and agility abilities for each class could better endure in combat. LvPaladins calls this “ping-pong” gameplay – referring to how each class can counteract each other if you’re smart with Realm Royale’s skills. But the game’s TTK has since been increased, so now everyone is a bullet sponge, and the focus is more upon who can deal the most damage rather than use their class abilities to stay alive and reverse the attack.

What makes these changes worse is how Hi-Rez has applied these changes. Rather than buffing class abilities so that they’re more effective for a player being fired upon, recent patches have focused on the guns. Hitscan and fire rate for both the assault rifle and the SMG have been greatly increased, for instance. This distances Realm Royale from its original selling point – the classes and their ability sets – as learning the best combination of abilities or trying to craft the best equipment in the forge has less power. 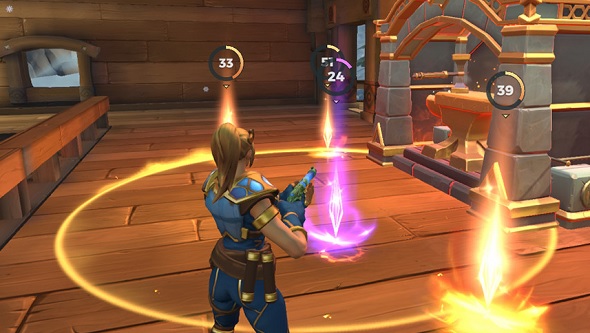 More now than ever, Realm Royale players are relying on automatic weapons to climb up the online ranks, while those who enjoyed the initial experience demand for it to return. This has divided the Realm Royale community. On one side are those who want to be able to quickly jump into the game, pick up a gun, and shoot their way to the top – using skills they’ve learned from other shooters and battle royale games. But opposing them are the players who were drawn to the game first, who hope for it to be carry on the spirit of WoW’s PvP, those who want Hi-Rez to focus on developing the experience that made Realm Royale stand out in the first place.

There’s hope for Realm Royale to avoid going in the direction of WoW as it’s still in alpha. But that depends on which path Hi-Rez wants to take. The studio is one of the first to really try to push the boundaries of the battle royale genre so it’d be a shame if it continued to get further away from what made it different.