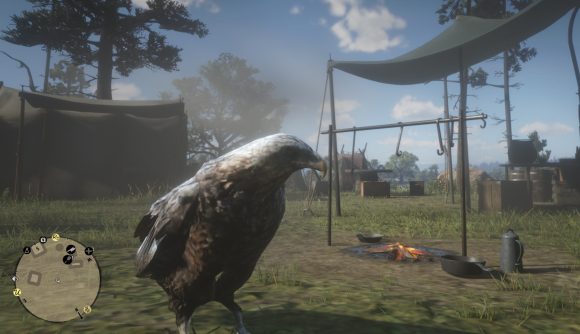 Red Dead Redemption 2 is now on PC, and it took all of a few hours for the mod scene to start hopping. Assuming you’ve already worked through any PC crash issues, mods promise a whole bunch of neat reasons to return to the biggest name in western games, and they already include options to escape the bounds of the human body.

The Model Swap mod, available on Nexus Mods, does what the name implies – but also quite a bit more. You can replace Arthur Morgan with any number of other characters using a simple save edit, and those replacements are surprisingly robust. If you switch to an animal, for example, it’ll properly move under your control and animate just as its in-game counterpart would.

That even goes for birds, so yes, you can fly. As Eurogamer notes, the flight controls are initially a bit sketchy, but you will absolutely be able to soar through the skies as your bird of choice. How is the game built that this is so simple to do? I don’t know, but I also don’t want to question it too much.

Not every model in the game works – the mod itself is marked as unfinished – and you will find some bizarre instances if you try to, say, sit on a bed as a sheep. Still, it’s impressive that Red Dead Redemption 2 mods are already this good.

Check out our Red Dead Redemption 2 PC review if you’re looking for more reasons to get into the cowboy epic – if, somehow, the promise of playing as sheep and eagles isn’t enough.