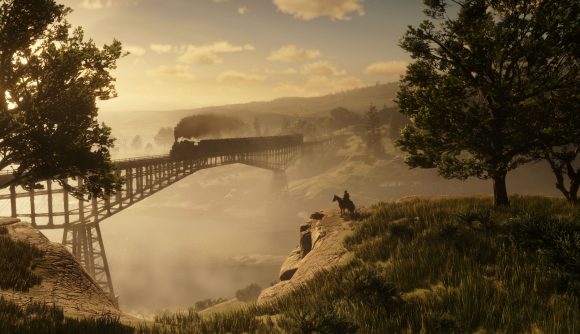 Remember that Red Dead Redemption 2 mod that lets you play nude? Well, the tool that lets you take on the wild west al fresco has got an update which means you can now tackle it as a teeny, weeny, diddy little cowboy if you like.

The Lenny’s Simple Trainer mod by LMS over at Mod Red Dead is in its 0.7 version, and it now has some super fun options for scaling in the game. As evidenced by some honestly hilarious images and footage by Eurogamer, at one end of this scale is the chance to make leading cowboy Arthur Morgan really tiny, by choosing ‘player,’ ‘model scale,’ and then shrinking him to ten per cent of his original man-sized model.

Best of all, everything else in the world stays the same, so you can basically re-create a wild west version of Obsidian’s just-announced, ‘Honey, I shrunk the kinds’-style game, Grounded. Even Arthur’s guns stay normal-sized (and keep their normal firepower) so, while they look pretty strange strapped to his miniature body, he’s still mighty.

Get a look the microscopic cowboy dealing some full-sized damage in the video below:

But that’s not all. You can also make Arthur a giant of a man – twenty times his regular size – if you prefer, including his loyal horse if you have him saddled up before doing the scaling.

More like this: The best cowboy games on PC

If you’re tempted to try it yourself, head over to Mod Red Dead. As ever, note that using mods while playing Red Dead Online could land you a ban, so be careful how and when you use it. Better watch out for those incoming wagon wheels, too. Ouch.