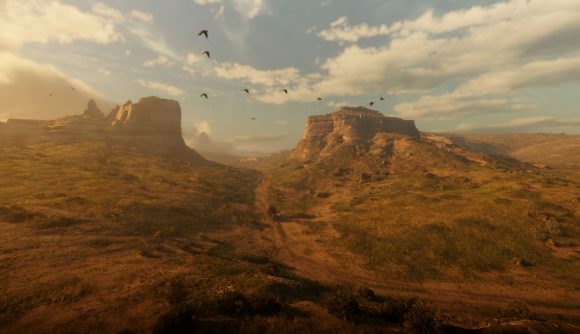 As spotted by Eurogamer, there’s a Lenny’s Simple Trainer mod posted by user LMS on Mod Red Dead that lets you “play as any character model.” It turns out there are some models you can swap in for Arthur that let you take to the plains, mountains, and swamps of Rockstar’s western adventure in the nip. In the (very long) list of models to choose from so far, there’s a file called ‘U_F_M_RhdNudeWoman_01’ which, unsurprisingly, lets you roam around as a nude lady.

In a similar vein, while there doesn’t appear to be a totally nude dude on the list, there is one that achieves something pretty similar – ‘U_M_M_ValPoopingMan_01.’ This guy has thought to keep on a shirt and waistcoat, but has unfortunately been caught with his trousers down. Breezy.

It’s not clear where these models originate from in the game – the ‘Rhd’ and ‘Val’ seem to suggest Rhodes and Valentine, respectively, but they don’t appear to be tied to any main story missions. It looks as though the ‘Pooping man’ is likely the one Arthur can stumble upon mid-toilet trip in the Valentine saloon. However, they’re there to try if you’re so inclined.

There are other options to try out too, if the thought of saddling up in the buff isn’t really your cup of tea. According to Eurogamer, you can become the ‘Crackpot robot’ from that sidequest with inventor Marko Dragic, zombies, a vampire, or even the other members of the Van der Linde gang if you so wish.

If you’re keen to tackle Red Dead Redemption al fresco head over to Mod Red Dead where you can grab the Lenny’s Simple Trainer mod and get model swapping. Just note that using mods while playing Red Dead Online could land you a ban, so be careful how and when you use it. You should also backup your game files and switch off autosaving, just to keep your regular (non-nude) files safe.