Howdy ho buckaroo. I see y’all eyein’ that Red Dead Redemption 2, hankering to see the game mosey its way onto your PC. Well, pull in your horns, duster – you just needs to buy it! But dang son, if you ain’t got the coin just yet, don’t be gettin’ your dander up. This here PC platform ain’t lackin’ for hard-livin’, hard-ridin’ videogames that evoke the spirit of the frontier.

Now that Rockstar’s latest Red Dead hoopla is finally out on PC (you can read our Red Dead Redemption 2 review, here, if it please you), we no longer need to look on green-eyed as our console counterparts bask in the glow of quaint prairies, snow-dusted mountaintops, and endless plains.

If you want to get au fait with the frontier, then these here games are gonna see you right. So holster that big iron, pack a bottle of moonshine or three, saddle up that mustang, and ride out into the sunset with these handy-dandy alternatives to Rockstar’s premier western.

So then, partner – let’s begin proceedings with a criminally underrated series. 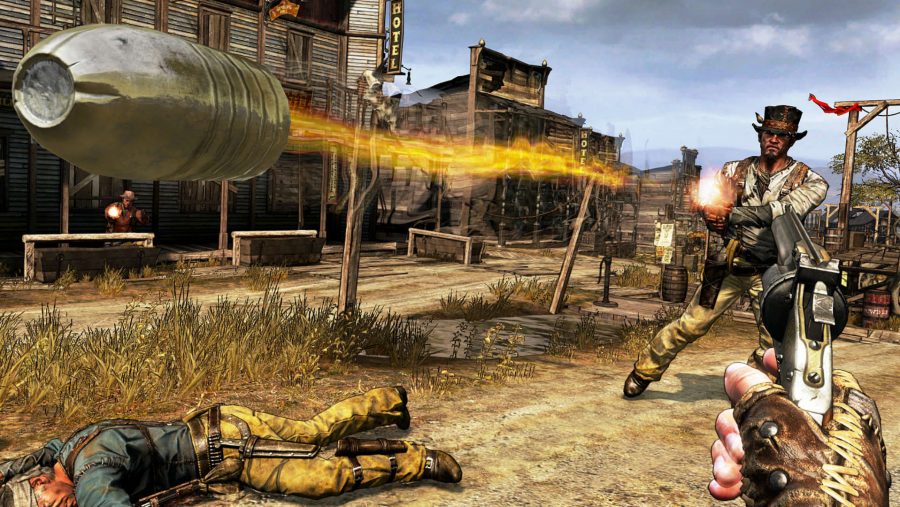 The Call of Juarez series never really took the world by storm. Call of Juarez and Bound in Blood were competent-but-bland shooters, and Call of Juarez: The Cartel was a certified locomotive wreck. When Gunslinger came along – right after The Cartel – few were expecting much. How wrong they were. Witty, fast-paced, and stuffed with satisfying arcade shooting, Gunslinger stands out as one of the best Western shooters in history.

Gunslinger follows Silas Greaves, an old bounty hunter, as he recounts his life story to a roomful of saloon patrons. He serves as the narrator as you play through his feats of heavily embellished derring-do. Red Dead Redemption fans will notice some familiar mechanics, most notably the Dead Eye style bullet-time and duel systems (also a standby of the Call of Juarez games).

Don’t go in expecting a game as huge as Red Dead Redemption – you’ll probably be able to beat Gunslinger in under ten hours. But if you’re after a well-polished shooter with a comedic and surprisingly clever story, Gunslinger is an easy recommendation. 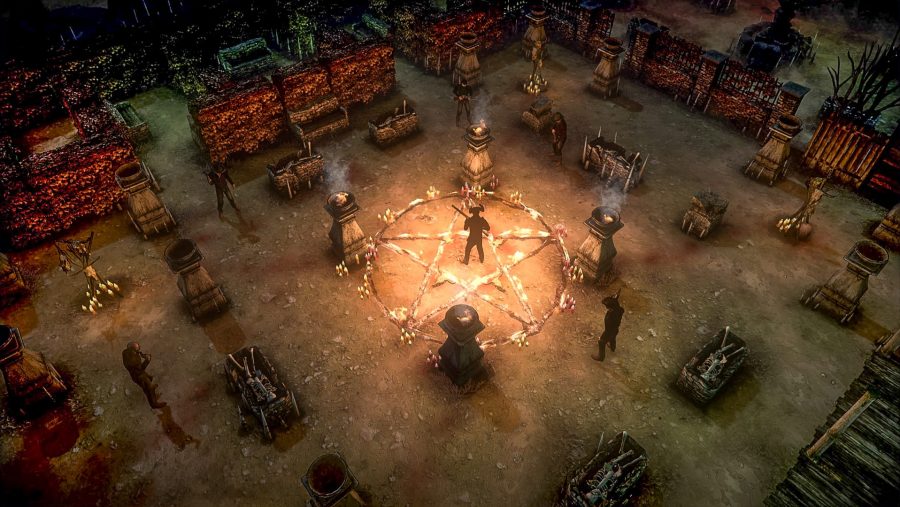 You like grit? ‘Cause Hard West has true grit, partner. This XCOM-inspired turn-based strategy game takes place in a the American Old West, but with a supernatural twist. If you enjoyed the mysterious encounters with the Strange Man in Red Dead Redemption, Hard West has got plenty of spooky encounters. Zombies, ghosts, demons, and even casual chats with Death and deals with the Devil are just part and parcel of life on the Hard West frontier.

Related: Desperados 3 is on its way, too

Gameplay-wise, Hard West is split in two: a solid, if maybe a bit shallow, squad strategy game, and an overworld with text adventure sequences. The real shine here comes in the level design, sinister atmosphere and old-west flavour. 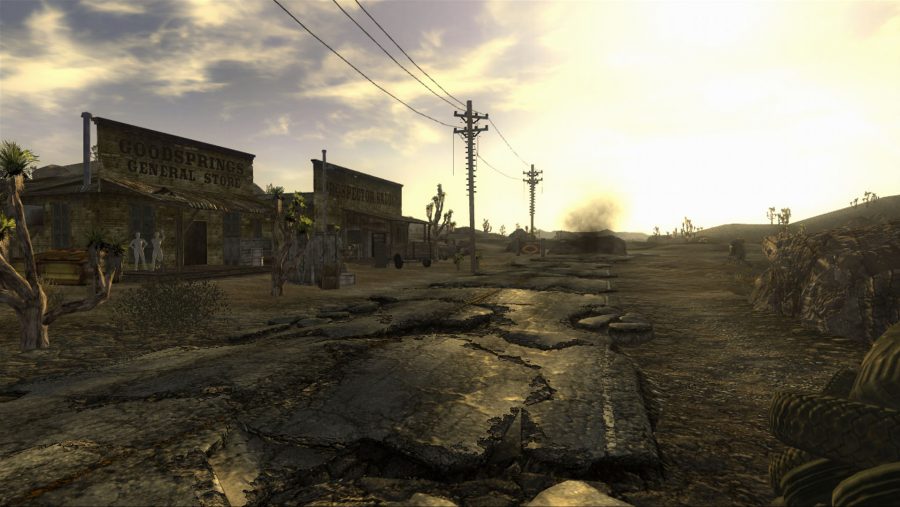 Who said wild-west adventures have to be set in the old west? Well, whoever said it was wrong, because Fallout: New Vegas brings the spirit of the wild borderlands to futuristic nuclear apocalypse. Though set in the far flung future of the 23rd century, New Vegas tells a quintessentially Wild West story. Encroaching armies to the east and west, fighting tooth and nail for a vital resource, and the hapless locals get caught in the middle.

New Vegas uses the same engine and tonnes of the same assets from Fallout 3, but it’s the writing where New Vegas really stands apart from its predecessor – personal stories of love, loss and revenge, the explosive interaction of clashing political philosophies, and the day-to-day suffering and scraping to survive on a harsh frontier. New Vegas has much to offer anyone looking for a well-written revenge narrative to replace that of Red Dead Redemption.

Once you’re done with the main game, you can extend the New Vegas experience by hundreds of hours by making use of the game’s excellent modding community. Standout mods such as the New Vegas Bounties series bring even more Wild West flavour. 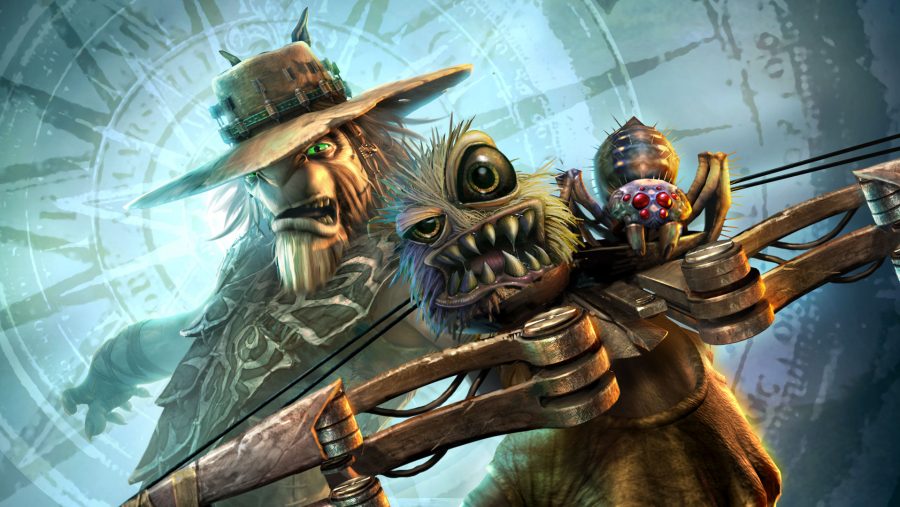 Remember the whole bounty-hunting system from Red Dead Redemption? Ever think it’d be better if you were hunting weird aliens, incapacitating them by shooting adorable little creatures into their faces with a crossbow? Yes, I thought so, too. Thankfully, Oddworld: Stranger’s Wrath fulfills that bizarrely-specific fantasy of ours, mixing the trademark Oddworld … well, oddness … with an old-fashioned backwater setting.

Related: Oddworld: Soulstorm will offer over 100 hours of gameplay

Stranger’s Wrath switches effortlessly between third-person exploration and platforming, and first-person sharp-shooting. Using a range of pocket-sized creatures as ammunition, the eponymous Stranger brings a variety of old-west gribblies to justice, dead or alive. 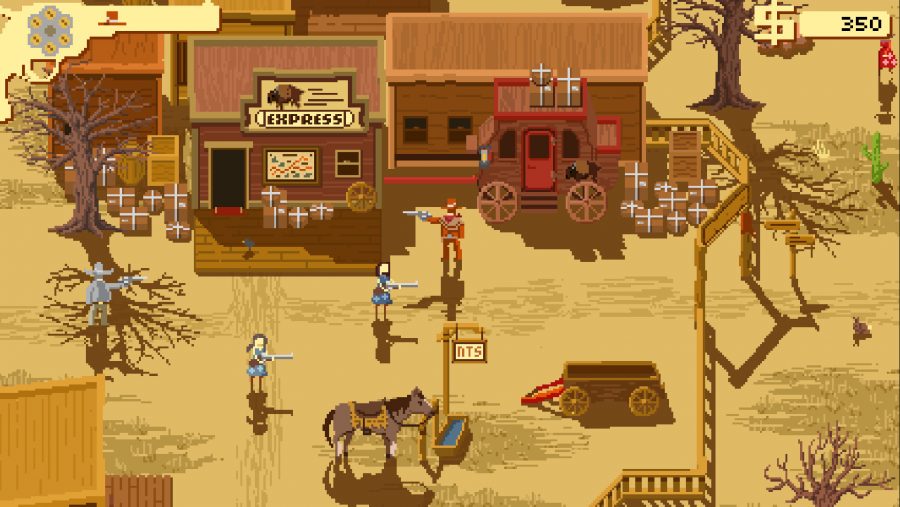 We all have busy lives, and sometimes you can’t face trekking through 50+ hours of gameplay to get a good story. Luckily, Westerado offers an engaging mystery narrative that’s done in a matter of hours, but is endlessly replayable.

Find the murderer and bring them to justice

The basic setup of Westerado is simple. Someone killed your family. You don’t know anything about them except one crucial detail. You journey across a surprisingly large and detailed world, doing odd-jobs and dirty deals in exchange for additional details about the murderer. Once you have enough clues, you can find the murderer hiding in plain-sight somewhere in the world and bring them to justice.

Westerado is short, but the murderer is different every time, and the way you behave while hunting him gives you a myriad of different endings and unlockables. To cap it off, the 2D gunplay is surprisingly satisfying, with great animations and sound effects. 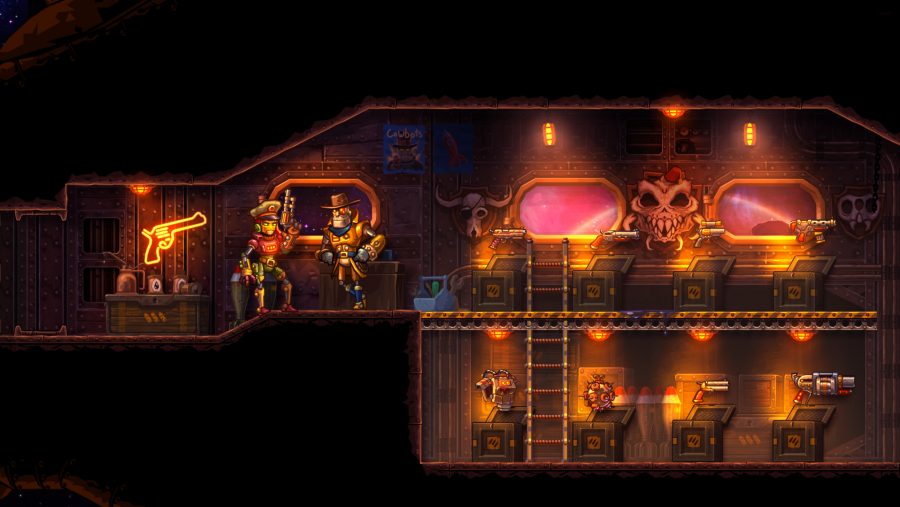 It’s tough to pick a single SteamWorld game to recommend. SteamWorld Dig and Dig 2 are both excellent metroidvania adventures, and Heist is a turn-based tactical joy with endearing characters and great mechanics. However, Heist also lets you shoot off people’s hats and wear them. If there’s anything more Wild West than shooting off varmints’ hats, we’ve yet to hear about it – so Heist is going on the list.

Related: Why Steamworld Heist is one of the best shooters on PC

SteamWorld Heist follows Captain Piper and her rag-tag crew of Steambot space pirates as they heist their way across the universe, facing sneaky scrapbots, snooty and militaristic petrolbots, and a newly awakened ancient robotic evil.

The turn based mechanics are deceptively deep – the core mechanics are simple, but there’s a lot of room for strategy. Using ricochets and trick shots can mean the difference between success and failure, and did we mention that you shoot people’s hats off? 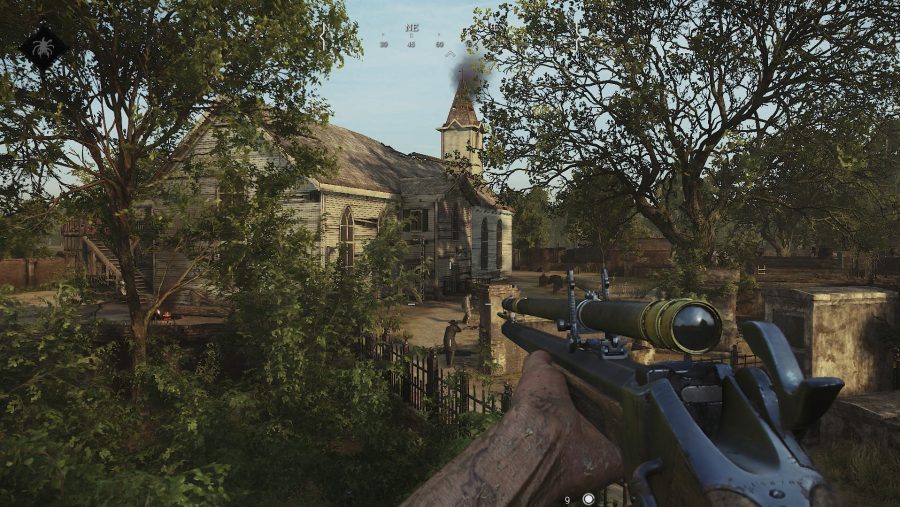 We’re in the old deep south for this one – ain’t no deserts here, it’s all stinking bogland as far as the eye can see.

While still in Early Access, Hunt: Showdown already offers a unique experience – a mix of L4D-style horde co-op and PUBG-style battle royale. Four to five teams of two hunters each are dropped into a zombie infested swamp, and tasked with defeating a hideous boss monster hidden somewhere in the open-world. Players can find clues, nail down the location, battle the monster, claim the bounty, and escape… or you could just wait for someone else to do that, then shoot them and steal their stuff.

Hunt: Showdown isn’t for everyone. It’s slow and methodical, and is engineered to cause maximum frustration. Doing all the work to hunt your quarry, only to be blindsided and robbed at the last second, never isn’t a pain. But if you’re the kind of low-down varmint who’d shoot a man just for snoring too loud, Hunt: Showdown might just be the game for you.

There you have it, pardner, the Red Dead Redemption PC alternatives you should be playing to fill the months before Rockstar’s Western sequel makes its way onto PC. Of course, that means there’s a crossover with our list of the best Western games on PC. That said there are some other titles on that list if you just love squinting thoughtfully into the sunset and holding up liqueur stores. When RDR2 does land, it’s a dead cert for our best PC games but, in the meantime, we hope the titles above make the wait feel at least a little less agonising.