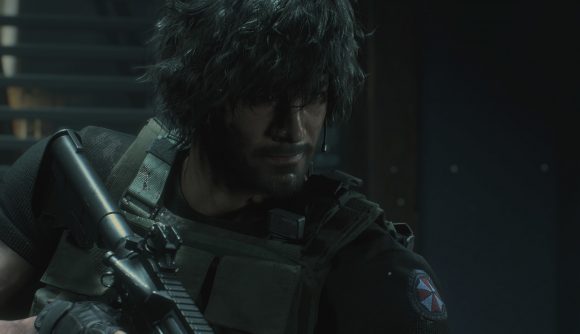 We’ve already seen a whole new look for Carlos Oliviera in the upcoming Resident Evil 3 remake, and it seems his appearance on the game’s cover art is indeed indicative of an expanded role in the game itself. In a new interview, Capcom teases that Carlos will have a more substantial part to play in the remake.

“Carlos will have an interesting section to play through,” according to producer Peter Fabiano (in OPM UK #171). That’s all the detail we’re getting right now as Capcom tries to avoid spoilers around the remake changes, but it looks like we’ll get to control Carlos directly during some portion of his time in the Raccoon City outbreak.

While that’ll be a new addition for the remake, a few features from the original will not be back. There will be no more ‘live selection’ system – those little choices during cutscenes that would take the story in slightly different directions. Similarly, there’ll only be a single ending this time around, which at least means there’ll be no more debate over the canon ending to the game.

You also won’t find Mercenaries mode here, but that probably shouldn’t be surprising, since Resistance looks to fill the gap of secondary, action-focused content.

We’ve already gotten a look at Resident Evil 3 system requirements, so you can make sure you’re prepared when one of the biggest upcoming PC games of 2020 drops on April 3.