For those just tuning in, RimWorld is a sci-fi colony / city building game set on a distant planet at the edge of the galaxy that takes a lot of thematic inspiration from Firefly. The goal is to build a colony and survive, then build a ship and escape. Easier said than done.

Before starting a colony, you must generate a world which creates a globe covered in different biomes, road and river networks, and various factions of differing opinions. And while this can look like Dwarf Fortress levels of information, the it thankfully has a lot of common sense to it. Temperate forests and grasslands are easier than deserts and ice sheets, longer growing periods means more food, and higher Winter temperatures means you won’t freeze to death as often.

After picking a space to land, you can then generate your starting colonists, either randomly, or picking the skills you want yourself. Landing somewhere with good growing temperatures throughout the year? Having someone with good growing skills will make sure you’ve got enough food. Not playing on peaceful? Well, you’re gonna need colonists that can fight and one or two with decent medical skills to patch them up after a raid.

RimWorld, like any good management game, has a logic to it that is easy to follow once you’ve gotten used to the basics, and those basics are easy to pick up too. Building is done through a tycoon style blueprint system where you draw out what you want to build and just have to make sure you have the resources available or can at least get the resources.

Combat is all about making sure your colonists have a weapon (there are mods that make ammo a requirement if that’s your thing) and positioning them where they’ll be most effective. And thanks to the reactive tutorial, if the game thinks you need help with something, it will flag up the relevant tutorial tip at the corner of the screen.

This simplicity means that even when a colony you’ve spent dozens of hours on is wiped out by a pirate raid, or a fire that gets out of hand, RimWorld still manages to have that sense of ‘losing is fun’. Seeing colonists grow and relationships develop, having a colony that grows organically as resources come and go and as parts are damaged and replaced makes each colony feel unique and enjoyable and is what makes this game so addictive.

There is a design concept called ’emergent storytelling’ where, instead of providing a narrative, the game is instead designed to provide players with the ability to tell their own story using the game’s mechanics. RimWorld and Dwarf Fortress are the two biggest examples of this and they both do it excellently. RimWorld’s story systems remember when big events have happened and who was involved. Social and combat logs make discussions and fights so much more descriptive; it’s possible to get seriously invested in the lives of your colonists. 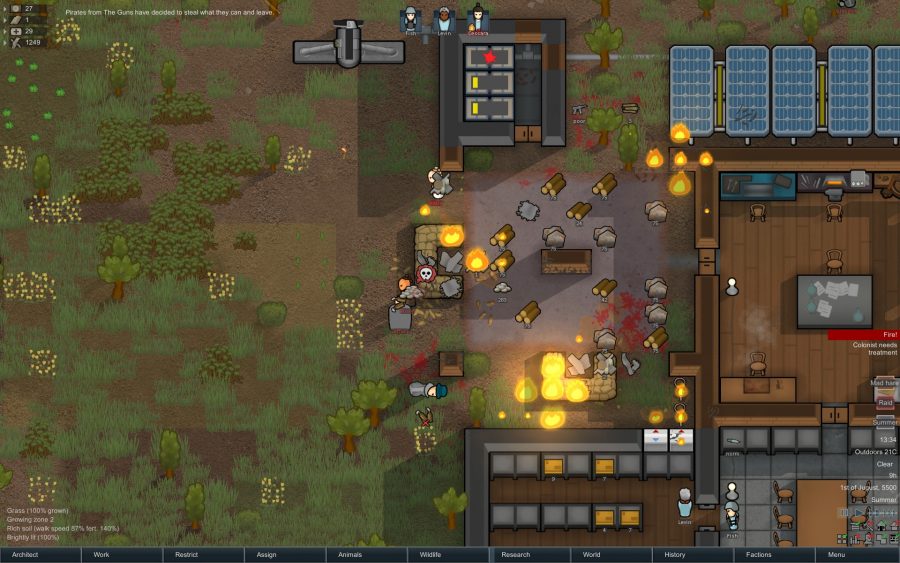 RimWorld has changed so much through its five-year early access stint that it almost feels like several different games. From the single arid shrubland map of the early alphas (before cooking, joy, seasons, temperature, and tonnes of other things were added), to the planet-spanning simulation that it is now, it’s been quite the journey.

It might look simplistic, but the number of systems working together under the hood create a believable world. Crops grow, plants spread, animals mate, migrate, and prey upon each other. Colonists have opinions, moods, and relationships that change over time. The combat system was originally designed for a Jagged Alliance style game, and perhaps is the most awkward of the lot.

The 1.0 release that marks the end of early-access is mostly a bugfix update with a new food restriction system which really helps for stockpiling as colonists can be told to eat the perishables instead of the packaged meals. And while I’m a bit upset at the lack of a massive update like the caravan patch, it is still a damn good game. 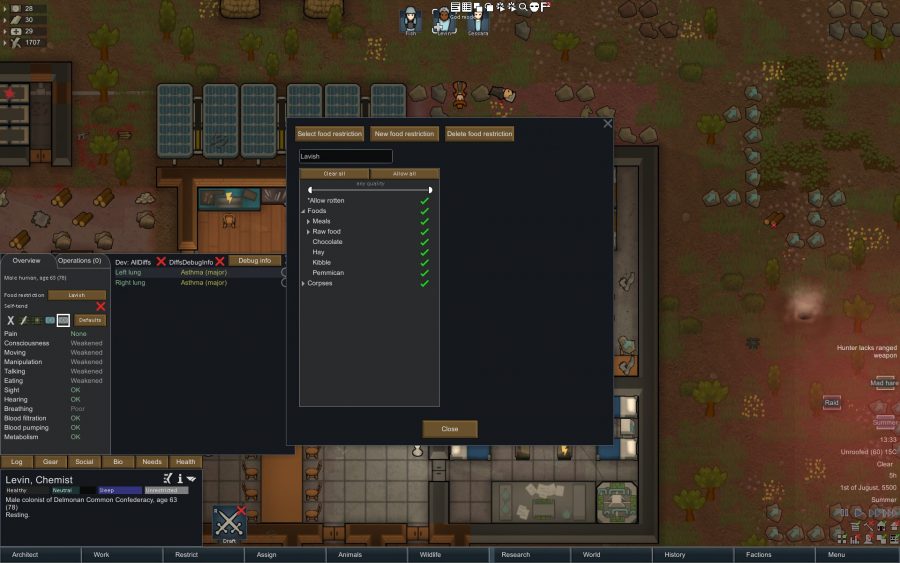 1.0 is essentially the last big clean before handing over the keys and that’s okay as, much like Minecraft and Skyrim, the incredible modding community looks ready to keep RimWorld going for a long time yet. Maybe now that they won’t have to play catch up with every update, we may even finally get space stations and moon bases or Factorio-style railways!

My only criticism is that after playing with mods, vanilla RimWorld can feel empty. The furniture options are slim and certain medical procedures like prosthetic noses, digits, and toes aren’t available. The price may also go up as the game is officially leaving early access, so if you’ve been holding off for whatever reason, now’s your chance to slap some sense into yourself and get on board.

Rimworld is a new standard in survival/strategy sims, and has emerged from early access with grace. Now the real fun can begin...