Spurred on by a booming esports and competitive gaming scene, one of the fastest growing trends in the PC gaming peripheral market throughout 2019 and into 2020 has been building lighter twitch gaming mice. Today, we take a look at Roccat’s venture into the world of the lightest gaming mouse: the Roccat Kone Pure Ultra.

On the surface the Kone Pure Ultra looks like any other speedy rodent you’ll find scurrying around most respectable retailers warehouses. You’ve got a selection of switches: two above the thumb that serve as back and forward by default, and two beneath the scroll wheel that tap DPI up and down through a carousel of presets. All fully-customisable through the Roccat Swarm app.

But look a little further and you’ll find that there’s some carefully crafted curvature across the Kone Pure Ultra. The thumb rest is supportive and decently concave for most digits, and there’s a comfy slight divot for your pinky. It’s a surprisingly supportive mouse for its rather, I’ll say it, bland exterior – which has been slightly pared back in comparison to the rest of the Roccat Kone range.

It’s definitely far from the most appealing mouse in the world when it comes to appearance. But don’t forget, this is a contender for the lightest gaming mouse crown. And there’s more to this mouse hidden under the surface.

While the Glorious Model O, Model O-, and Cooler Master MM170 opt for the perforated external style, Roccat favours shedding weight internally – unbeknownst to the casual onlooker. The Kone Pure Ultra is able to weigh in at just 66g thanks to a unique weight-saving internal structure. It’s like the Glorious turned inside out.

The benefits of such an approach are evident. It’s a featherweight class fighter by all counts, and you needn’t grab a bottle of compressed air every few weeks to keep it clean and tidy. 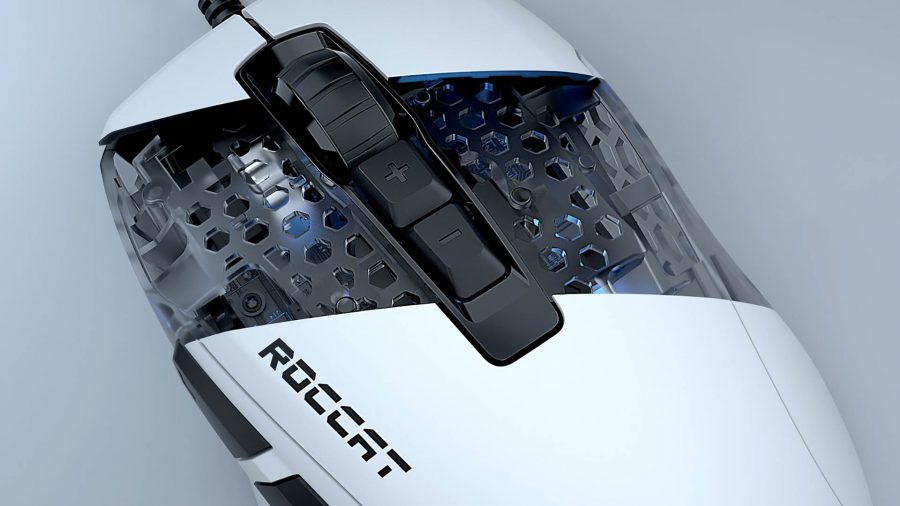 Within that fancy lightweight frame sits Roccat’s Owl-Eye Sensor, a 16,000 DPI optical unit built on the foundations laid out by the much-loved PixArt PWM 3389 Sensor and rated up to 50g acceleration. There’s no running from PixArt sensors in most of the best gaming mice today, but when you know you’re getting a rock-solid design, why try?

The sensor keeps up with rapid movement and offers solid tracking with good accuracy – no issues here whatsoever.

Roccat comes with a reputation for quality gear

There’s also the option to expedite the mouse’s response time from within the Swarm app. Once activated, this ‘zero debounce’ mode will speed up mouse click recognition by removing the time delay usually incorporated into mechanical switches to avoid chatterr (rapid on/off signals) and ensure a clean signal. Debounce will be familiar to you mechanical keyboard buffs out there. Just be wary of misfires with this setting turned on, especially if you’re prone to throwing your rodent about. I could happily leave zero debounce turned on without affecting my game – but your mileage may vary.

On paper, the Roccat shares many similarities to the Razer Viper. Razer’s lightweight mouse also features a sensor made in partnership with Pixart, and at 69g it’s only a drop heavier, too. What sets the Razer Viper apart is its ambidextrous design – the Pure Ultra is right-handed only – although you’ll have to pay an extra $10 for the privilege, lefties.

Roccat has kept to the book for the scroll wheel and left and right mouse buttons. There’s not much to write home about here, but all three feature a solid, crisp click and there’s no interference between the two primary keys to trip you up mid-game.

Unlike a few of the prestigious gaming mice it’s up against, Roccat has deemed RGB lighting worthy of inclusion. On the rear of the mouse, right under the palm, there’s an AIMO-compatible Roccat logo. This can be synced up with your other compatible Roccat devices if you so please through the Swarm app, or just left to default gently going through all the colours of the rainbow. 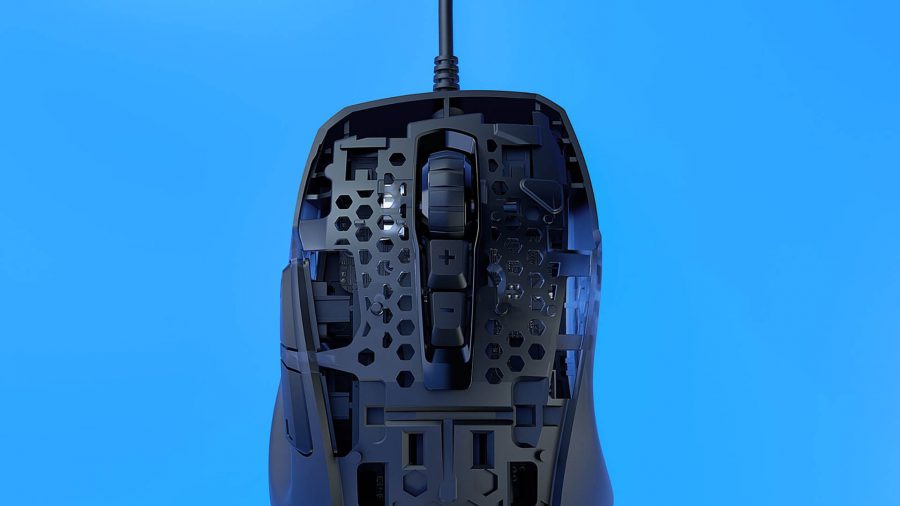 Also unlike many mice today, Roccat’s decided against the industry-standard braided cable for this one. In its stead is a plastic cable with plenty of give that should stay relatively out of the way at 1.8m long. Sure, it might get chewed up by your naked mole rat a little quicker than most, but I’ll take a flexible cable over a braided one any day. That’s a thumbs-up from me.

My only concern is the occasionally pricing disparity between the Kone Pure Ultra at $70 (£70) and the Cooler Master MM710, Razer Viper, and Glorious Model O. Especially in the UK where prices are trending downwards from the original MSRP.

Across the Roccat, Razer, Glorious, and Cooler Master, you’re bound to find a bargain among the reeds, however, and any one will deliver a solid gaming experience. At least if you know you don’t enjoy the feeling of a perforated mouse, or it’s just not your style, you can focus your attention between the lightweight construction of the Roccat Kone Pure Ultra and Razer Viper.

Roccat comes with a reputation for quality gear, too, and the Kone Pure Ultra is no different. You can throw this featherweight mouse about your desk for the finest of flick shots safe in the knowledge that Roccat’s build quality will keep you in the game and your mouse in one piece. That’s because the Roccat Kone Pure Ultra is more than a lightweight gaming throwaway to stay on-trend, it’s a genuine contender for the best lightweight gaming mouse crown.

Roccat has built a superb lightweight gaming mouse with the Kone Pure Ultra. One which delivers all the essentials for fast-paced gaming all the while retaining comfort and a sleek style.