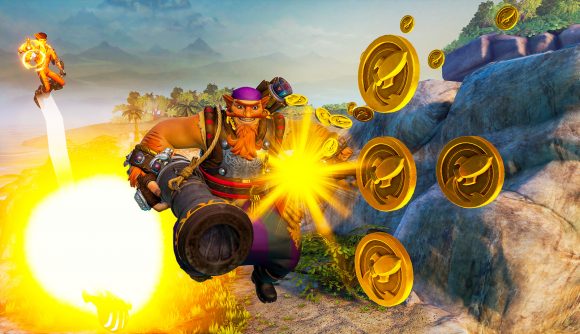 Plenty may be clamouring to take a hike in Hideo Kojima’s Death Stranding, but if you want to download something more action-packed tomorrow instead then Rocket Arena might interest you. Don’t take my word for it, though, here’s what the games press made of it.

Most websites seem pretty consistent in their scoring with mainly sevens across the board, and the odd eight and one nine. All in all, aggregate site Metacritic has the third-person shooter at 77 out of 100. Shacknews was a big fan of Rocket Arena, scoring it a nine and saying: “With a grand number of game modes, maps, and interesting characters with unique abilities alongside their personalised explosives, Rocket Arena certainly has more than enough personality to set itself from the pack.”

Gamesradar, meanwhile, also liked what it saw. While the site admits there’s only so much you can say about a live service game on day one, it still reckons it’s worth your time. “If you’re looking for a new and approachable take on shooters, and if you can overcome some of your preconceived notions about how many giblets a well-aimed rocket should produce”, the website explains.

PCGamesN is pretty much in agreement with everyone else, with Ian Boudreau giving it a 7/10 in his Rocket Arena review. He concludes, “An accessible, lightweight competitive shooter. Though it’s a little thin in its current state, this is a solid start for what will hopefully become a lively and dynamic game as its season pass gets underway”.

Now you’ve heard some consensus of thoughts, here are the Rocket Arena review scores as they currently stand:

If you’d like to hear more about the new PC game, we sat down with the Rocket Arena devs to chat about cross-platform and the switch from first-person to third. If you’re curious about what else is coming up, we’ve got a list of upcoming PC games, too.