Recently, Psyonix announced that the non-standard maps in Rocket League – Wasteland and Starbase ARC – will be removed from ranked play with the game’s autumn update, which lands on September 28th.

With a move like this, Psyonix are looking to make Rocket League analogous to traditional sports. Your ability in the game all comes down to your dexterous capabilities – how well you can control the car and use it to manipulate the ball in play.

Make sure to get to grips with all the best Rocket League tips and tricks.

Compare this with FIFA: you press a single button to shoot, at which point the game’s systems kick in to do all the maths so that the ball heads toward the goal – you have limited control over how well that is going to go. In Rocket League, however, to pull off the same feat, you have to physically orient your car so that the right part of it hits the right spot on the ball, all while travelling at an adequate enough speed in the correct direction. 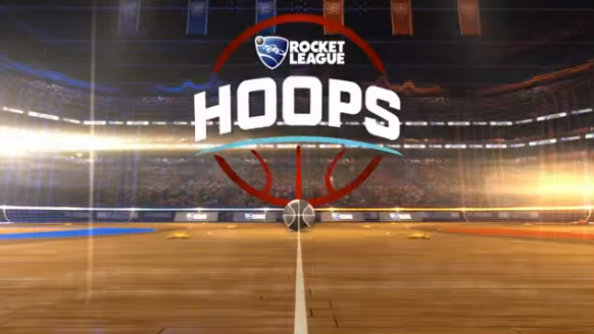 This physical interaction means that skill in Rocket League mostly comes from your fingers, rather than your head. There are no systems that act as a middleman between you and the raw mechanics of the game – no power-ups, ultimate abilities, aim-assist, nothing like that. The freedom that this gives you can be daunting as it gives as much room for failure as it does for success, if not more.

The result is a sense of complexity that seems to get deeper the more you conquer it. This is inherent to any open-ended system, especially those set out by real-life sports. Table tennis, for example, has simple rules, but watch the best players go at it and you’ll see how tiny factors like stance, bat grip, head movement, even the angle of an elbow contribute to the huge network of careful adjustments professional players have to consider inside those rules. Rocket League is very similar in that way. There /are/ ways to play Rocket League without this level of purity – Rumble, for example, is an alternative game mode that gives you random abilities on a ten-second timer – but while it is reasonably popular among casual players, it didn’t take off in the competitive scene. This is most likely because it deemphasizes the expert skills those players had spent hours building. 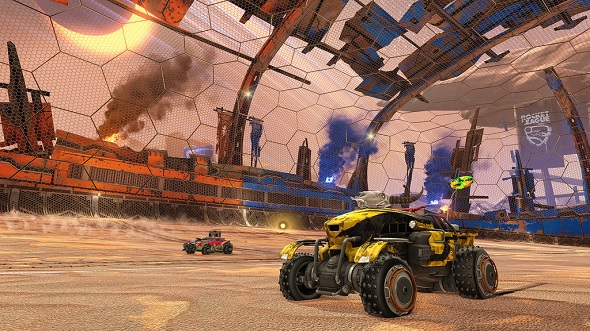 When Wasteland, the first map with a non-standard layout, was added to competitive play, it had the same occurrence rate as any one of the variants and skins of the standard map, making its appearance rare. The second non-standard map, Neo Tokyo, was removed from ranked rotation within a year of its introduction, reworked as a standard map, and then added back into the pool. At no point was the non-standard map occurrence boosted, so when a new standard map was introduced, Aquadome, the likelihood of seeing Wasteland or Neo Tokyo was further reduced.

Finally, the most recent alternative map to be added was Starbase ARC, a map that was octagonal in shape. It’s fun to mess around on, but there’s a reason most sports don’t have a field with a length that is equal to its width – it doesn’t work so well in serious competitive play. It didn’t really fit into Rocket League, either. The point is this: by having the occurrence rate of these maps so low, Psyonix never fully committed to introducing non-standard maps to the competitive scene. Instead, they reacted to a vocal majority on Reddit by adding a map preferences system in December 2016 that reduces the likelihood of seeing maps you downvote. It’s a sign that they knew, or were at least learning, which map design approach worked for Rocket League and which didn’t. 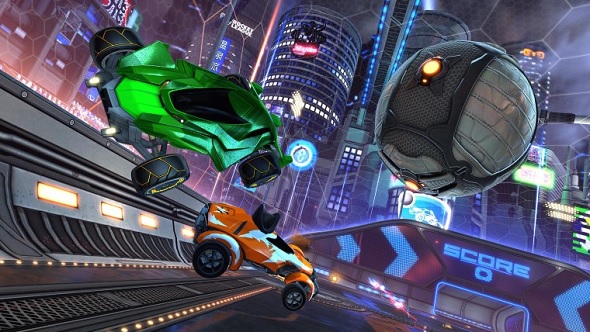 Today, feelings in the community are mixed with some influencers and players saying that removing non-standard maps from competitive play was a mistake, especially when compared to other esports. Meanwhile, there are plenty of other players who are happy to not have to play on those maps. The comparison of Rocket League to other esports is an interesting point of contention. Perhaps it’s the amount of time we can physically spend playing videogames compared to playing sports in the flesh, but gamers as a whole seem to expect a minimum level of complexity from esports. They want a certain number of factors or systems inherent to the game that can be used to produce a measurable meta that analysts can talk about.

StarCraft 2’s meta is defined by its maps. Which maps are in rotation or what tactics and build orders work well on which maps is a huge part of the esports environment of that game. CS:GO’s meta is based around the economy of the game and the map you are on: when do you take an eco? What loadouts do you need to hold which chokes? It goes on. Dota 2’s meta is a little different, as it has a single map, meaning it is defined by its heroes instead. There are close to a hundred characters to use, all with different quirks, abilities, ranges, and more. The same goes for League of Legends (and most MOBAs, for that matter). Which hero you pick for which lane, who you use to counter a certain hero, who you ban – all of these build the meta of the game in competitive environments. 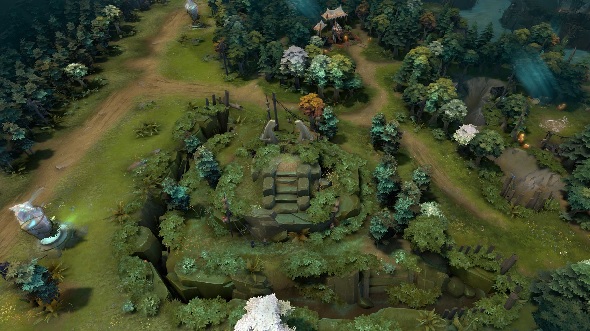 Changing the map in Dota 2, or adding new ones, would introduce yet another layer to the game, but it would risk making it far too complex. There are already an extraordinary number of factors to consider at every moment of play. As with real-life sports, when the structure of the play area is so essential to the win conditions, there isn’t a huge amount of wiggle room for alternative maps that both keep the game balanced and actually produce interesting results.

Heroes of the Storm is an exception to this, sporting as it does a number of different maps. But developers Blizzard had to make sacrifices elsewhere to make that setup work. Unlike Dota 2 and League of Legends, for example, there are no in-game items in HotS. Instead, characters have a talent tree that gradually unlocks new abilities across the course of a match. This greatly reduces the number of tactics players can adopt with each hero to overcome a situation. However, with that tweak, Blizzard were able to create a MOBA that boasts a variety of maps which are more objective focused, each one with its own flavour. HotS essentially traded items for map design, and while some still refer to it as a “gateway MOBA”, it has seen less success than one might expect given Blizzard’s track record and the popularity of MOBAs as a whole. 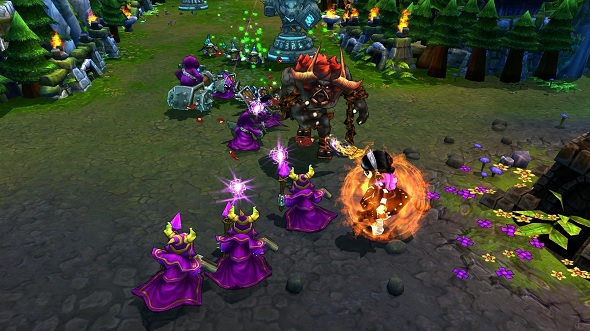 Character interactions are what make MOBAs interesting, it is what enables the genre to surprise you even after hundreds of hours played. League of Legends and Dota 2’s items enable you to tweak your character with much greater nuance than the talents system of HotS does. Both approaches to the MOBA are complex in their own way, but in HotS the focus is on making use of the environment, which is more limiting than a MOBA which emphasizes players’ mastery of character abilities and interactions. This is a lesson that Psyonix appear to be slowly learning themselves as they continue to work out how Rocket League slots into esports alongside these games.

Non-standard maps in Rocket League were an attempt to work towards mirroring the meta we see in other games, as well as trying to recapture the feel of the game that came before it – 2008’s Supersonic Acrobatic Rocket-Powered Battle-Cars. Rocket League’s predecessor didn’t have a ‘standard map’ per se, which suggests that Psyonix are building upon a decade of experience making car-ball sports games, but are only now really starting to understand how good map design – at least in the competitive scene – is dictated by the game’s mechanics.

Rather than the hundreds of items that MOBA players must memorise and learn to combine, Rocket League instead finds its complexities in physics. It is what makes Psyonix’s game closer to a real-life sport than an esport. Dota 2 players build spreadsheets comparing items and effects to successfully max out builds. StarCraft 2 players have to learn intricate timings to apply cheese strategies. But Rocket League players have to learn the quirks of a physics system – you have 1.5 seconds to dodge after you jump, dodging zeroes your vertical momentum, and your car’s centre of mass is not in the middle. Practising these tricks is akin to playing keepy-uppy with a football, learning to control its weight and trajectory.

As Rocket League requires that level of mechanical practice for a player to become consistent, it is vital that the map doesn’t throw the skilled player off by having an unexpected angle. For the best competitive play – that is, to allow for the most talented players to perform at their best – Rocket League’s maps should be standardised. That way, those players can make use of the same kinds of muscle memory and team plays that we see football players use. Non-standard maps were (and still are) fun, but it felt jarring to have them come up in rotation when you were playing seriously, throwing you off your game.

Perhaps, in the future, non-standard maps will make a comeback. That might happen should the competitive environment ever becomes stale, the mechanical skill ceiling reached. But if they do return, they will have to appear as often as the original map layout – rather than having a two in ten chance of appearing – or else risk feeling just as out of place as they do now. That situation feels a long way off, however. Given how long it has taken real-life football to get to where it is today, and how the quality of play continues to improve, we can expect Rocket League players to continue to push the envelope past all our current expectations.