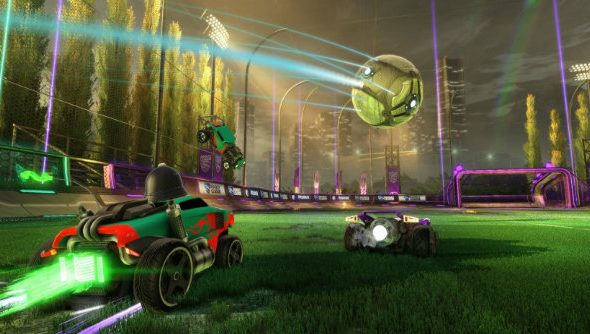 It could have all been so different. One early concept for Rocket League’s main menu music wouldn’t have felt out of place on Top Gear, or an early Sunday football show. That would have been a good fit for the game’s raucous combination of cars and sport, of course, but I’m certainly not sorry that developer Psyonix struck up a long-lasting relationship with EDM label Monstercat, instead.

Accelerate to pro status with our Rocket League tips and tricks.

Psyonix audio director, Mike Ault, is the man responsible for the direction Rocket League’s soundtrack took. He came up with the original concepts and also signed the deal with Monstercat, leading to the iconic bangers that back the game’s action today. Ault’s career has taken in music production, recording, and even movie work in LA, but now he’s in charge of signing artists for one of the most successful indie games on the planet, boasting a playerbase of over 34 million.

“I’d never really thought of [videogames] as a career path, to be honest,” Ault tells me. “I didn’t realise how much it aligned with my specific skill sets. When I was doing music, I had been a Pro-tools operator because I was very tech-savvy and I understood the computer stuff more than most of the music guys. How it eventually funneled into games was because I could do the music side, but I also understood the technical side a lot. It definitely worked out.” 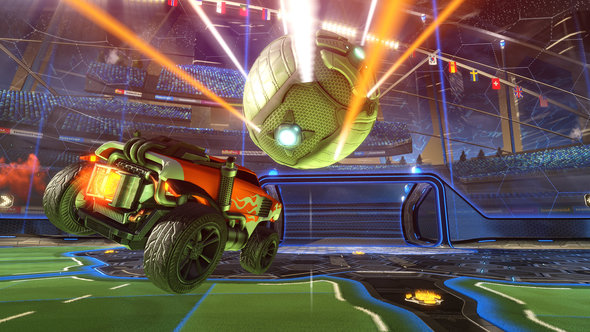 Rocket League’s music went through other iterations before settling on EDM – a brassy, regal, esports sound, for example, and heavy rock and thrash punk periods, too – but nothing fit quite like electronic dance tunes.

“They were all just ideas I had written,” Ault explains, “and we could never quite hit the nail on the head and find what wouldn’t be annoying in the game. Then one day, I basically took all my old music that I’d been writing on the side for fun, and I just threw it into the game and said ‘What do you guys think of this?’ Eventually they came back with ‘Well, nobody has any complaints’. So we shipped with a bunch of songs [by various artists] that were actually very dated at the time, but had a very positive reaction.”

After launch, Ault realised that people were particularly resonating with the main menu music. Suddenly, some of the indie musicians featured were gaining popularity, despite having no recognisable name. This has become a theme with Ault’s song selection for Rocket League: a desire to break out new talent.

“I’ve always emphasised that my goal isn’t to get large artists,” he says. “We don’t want to get people who are already famous. I wanted to sprinkle that in, but I want to keep the artists around the level that we’re already hitting. There’s a real benefit there – the artists are super ecstatic that they’re finally getting the chance to be heard. In this day and age, it’s really hard to get your music heard, because [the industry] is just inundated with stuff. Rocket League kind of falls in place with what radio used to do – songs that were curated, that someone selected, that you learn to love through exposure. I want to focus on smaller artists.” 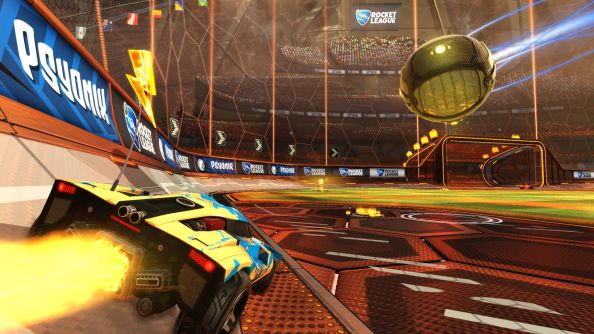 When the label releases new Rocket league albums, it always features two or three established musicians who are on the rise, but the rest have a real chance of using Rocket League’s massive audience as a platform.

One of these up-and-coming artists is Canadian producer Conro. Conro has already seen some success, with his biggest track, City Lights, topping four million Spotify plays. Originally a producer of rock and folk, the home-taught musician made the jump to electro when there was a big explosion on the scene with acts like Skrillex, Zedd, Porter, and Wolfgang Gartner. “I found myself spending more time researching electronic music than writing on my guitar,” Conro tells me. “So I made the decision to try it out, and now I’m here.”

As with Ault, the opportunity to work on Rocket League’s music was serendipitous. “I was at home, working on music,” Conro recalls. “[Monstercat’s] head of music reached out to me on Facebook and mentioned that there might be an opportunity on Rocket League. I was so excited, and jumped on the project. ”

The song he submitted, titled All Me, was sat on his computer waiting for a chance to be used. The name comes from Conro saying “all you” in the game when his teammates are on the ball. Now his music is in the game, all eyes are on him. It wasn’t fully developed, but he knew this was the right one to flesh out for Rocket League. The excellent track is doing modestly on YouTube so far, but you can see from the comments where the bulk of views have come from.

All Me’s funky future bass certainly fits Rocket League’s mood, which is something Ault strives for. Despite the game featuring various artists, he wants Rocket League’s soundtrack to be immediately identifiable, tunes synonymous with cars playing football, the cheer of the crowd, the futuristic stadiums, and the impossibly-green grass of its pitches.

“Most games of Rocket League’s nature tend to go for a more aggressive approach, but what makes Rocket League unique is that it’s more light-hearted,” Ault says of the selection process. “We go mostly for melancholy. We go for something that elicits that sense of a ‘pleasing memory’. When we pushed forward, we kept the concept in mind that no matter what we do, no matter how aggressive the song is, it needs to have a catchy melody that needs to make you feel a ‘longing’. Since we rotated the lead song, you’ll see comments all over the place about how they miss the song that was the lead song when they first started playing. I really like that, and I want to keep that going.”

Based on Rocket League’s success, it would seem that videogames are something music producers should be keeping a careful eye on. Marrying an artist’s music to the right game can beam it into the ears of people who will hear it over and over again, especially in service games like Psyonix’s opus.

Take music producer Drunk Girl, for instance: after being featured in the game, they shot from around 500 Spotify followers to 60,000. Ether is another success story – a relatively unknown 17-year-old who rocket-jumped to success after the game featured his tracks. Just as Hollywood keeps trying to tap into videogames’ successes, musicians will likely be the next wave. And, to be honest, I’m much more enthused about more licensed music in games than I am about a Tetris movie trilogy.

This feature was originally published on August 14, 2017. You can read more about Rocket League here.