I never knew I wanted a turn-based Mark of the Ninja, but after playing Ronin at PAX East, from developer Tomasz Wacławek and published by Devolver Digital, I’m surprised to say that it’s become one of the games I’m most eager to play right now.

It was one of the great surprises of PAX. It plays out with the flashing, frame-by-frame intensity of an anime action movie, and with the thoughtful, tense pacing of a game like Frozen Cortex or XCOM.

Ronin and I did not have the best introduction to one another. I took over the demo station from a PAX attendee who, after dying in the same place for the tenth or twelfth time in a row, looked around in outraged disbelief, then flung the 360 controller on the table and walked away. It was sign of things to come.

If Ronin has a weakness, it’s a certain stinginess with control inputs. Too many commands are bound to a single thumbstick. Whether you’re using a grappling hook or simply jumping, Ronin insists on trying to divine your exact intent from the thumbstick, which means watching as it flickers between the move you want to make and a very different, likely disastrous move. I was fighting the controls throughout my demo and, awesomely, the developer told me I was wrong when I explained my issues with the controls.

“No, it’s quite simple,” he said, before showing me the exact same controls again and walking away.

So fear not, fellow enthusiasts: the groin-kickingly sadistic spirit of Eastern European PC game design is alive and well. And while that might make for a frustrating demo experience, it also appears to be yielding up a savagely brutal, yet thoughtful stealth game. 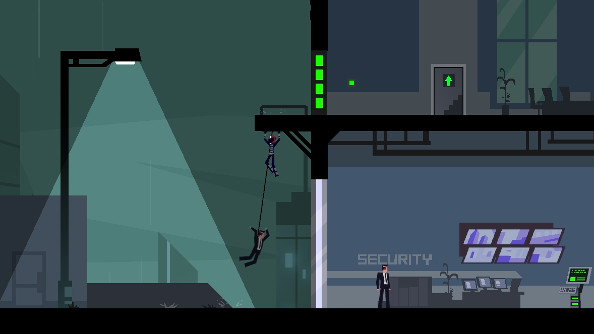 Ronin tells a standard-issue revenge story, and the campaign unfolds as a Kill Bill-like series of assassinations targeting a cast of characters who betrayed your character and left her for dead. While I’d call Ronin a stealth game, if only because the direct approach usually ends in swift death, your hands will get very dirty. An elegant, bloodless approach is simply not possible. It’s a stealth game while you reconnoitre your next objective and take the most advantageous position. Then it turns into a turn-by-turn deluge of blood.

Even here, however, Ronin is atypical. You freeze time every time you queue up a jump or grapple command. So combat unfolds in a series of impulses as your move executes, the world reacts, and then freezes as you plot your next step.

As you might expect, this makes your character an absolute dervish of destruction. Guards stand, frozen in place, while you have time to plan a jump that will carry you safely out of their line of fire. However, after each impulse, all the guards have drawn a bead on you and you have to make another move to escape certain death.

That rule — the inevitability of the guards’ return fire — is what keeps Ronin from feeling too easy. Taking out one or two guards is a breeze, even if they are alerted to your presence. Taking out five or six is an exercise in geometric futility. 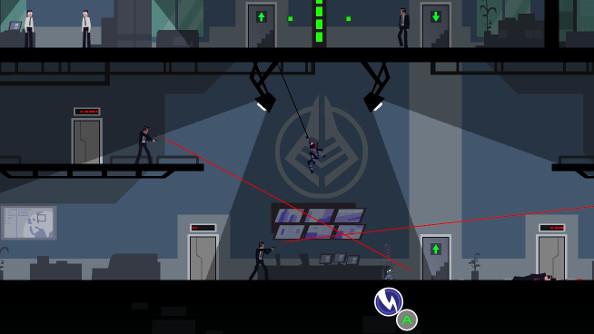 But it also makes Ronin an oddly satisfying game. It unfolds in a series of bloody tableaus. The camera flashes and your ninja is using the grapple to drag a guard to his death in the rafters. Then the room is cut apart by the red beams of the survivors’ laser-sights as they try and bring you down. Another flicker of movement, and the ninja is flying out of the way of the gunfire and descending on another hapless sentry. Then there’s a geyser of blood, and the guard falls to the ground, and the ninja is already gone.

There are other wrinkles that Ronin throws at you, of course. Level design gets more devilishly tricky, and other enemy types have different properties than the lowly guards, like a terrifying samurai who will rip you apart if you get within range.

While I’m not sold on the control scheme, Ronin’s mixture of hyper-violence and cold calculation was a consistent delight. I’m eager to give it another shot when it comes out sometime this fall.