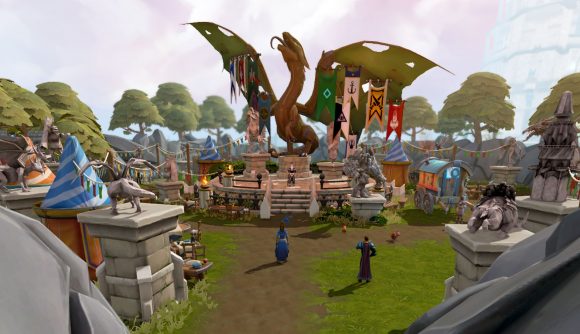 2021 has dawned, and with it a special milestone anniversary of one of the best MMOs on PC. RuneScape launched on January 4, 2001 which means the massively multiplayer game is 20 – yes, 20 – years old this very day. To celebrate its birthday, developer Jagex is launching a year-long series of “anniversary-themed game content”, some of which will let players delve deep into the title’s past, present, and future.

The first of the anniversary content drops into RuneScape today with an event called The Grand Party. The content ushers in some of the long-running MMORPG’s “most recognisable characters”, Jagex says in a press release, such as the Sandwich Lady and Wise Old Man (remember them?) in Lumbridge Crater. The event also adds a batch of area buffs, collectable in-game rewards like an anniversary outfit and cape, and a hearty dose of nostalgia in the form of references to days of RuneScape past.

Starting January 25 with the scene-setting Foreshadowing prologue, the game gets a four-part 20th anniversary quest called Once Upon a Time which will run over 2021, and take a peep at the game’s future as well as its past.

Plus, this year there’ll be an “epic elder gods story arc” to sink your teeth into, too. Details are sparse on what this will bring right now, but the dev teases that those elder gods, “the beings who forged Gielinor, rise once again”. Gulp.

From Jan 4 to Jan 31 there’ll be quests, buffs, and a celebratory new outfit to enjoy!

So come on, head to Lumbridge Crater and join in the fun 🎉 pic.twitter.com/mMrXPkS8xU

Sister game Old School RuneScape is getting its own celebration, too. Players will battle beasties – that is, “demons and dragons of yore” – alongside the Green Gnome Child, starting this week. Sweet.

If you’re a fan, be sure to check out our look at how Runescape’s party hat became so valuable, with the humble party hat that was designed to be a junk item now worth billions of in-game gold.