In case you don’t know, we’re rapidly approaching Runescape’s 20th anniversary. The pioneering MMO has led the industry in everything from regular content updates and free-to-play mechanics to educating players on account security, but Jagex’s crowning achievement remains its exuberant holiday events. Every year players can expect celebrations around Gielinor to mark Easter, Halloween, and Christmas, with holiday-themed quests, cosmetic items, and festive makeovers for different locations.

Of all the holiday events in Runescape’s 20-year history, one cosmetic item stands out: the humble party hat. Despite having no use whatsoever, the party hat would go on to sell for billions of gold pieces between players, and eventually became so valuable that it exceeded the maximum amount of gold that could be traded in-game. We spoke with Runescape design director Mark Ogilvie, lead designer Dave Osborne, and product director Matt Casey to get the inside story behind Runescape’s most expensive item.

Incredibly, this all started nearly 20 years ago, in 2001. Runescape’s designers at the time, Andrew and Paul Gower, wanted to surprise players at Christmas, so they logged into different servers around the world, went to popular areas around Gielinor, and started dropping Christmas Crackers for players to pick up and open. Of course, Christmas crackers tend to contain a cruddy paper party hat, a lame joke, and some miniscule trinket, and Runescape’s were not too dissimilar; every cracker would contain a coloured party hat that players could wear, but there would also be a relatively valuable item like a silver bar or a gold ring.

“The idea was that two people would pull a cracker together. Somebody would get a silly little party hat which they could put on their head, run around, and celebrate Christmas. The other person would get a valuable or semi-valuable item and they wouldn’t get a hat, but they would be happy because they got something of value,” Ogilvie explains. “The hat is the junk item. It was intended to be the item you didn’t want.” 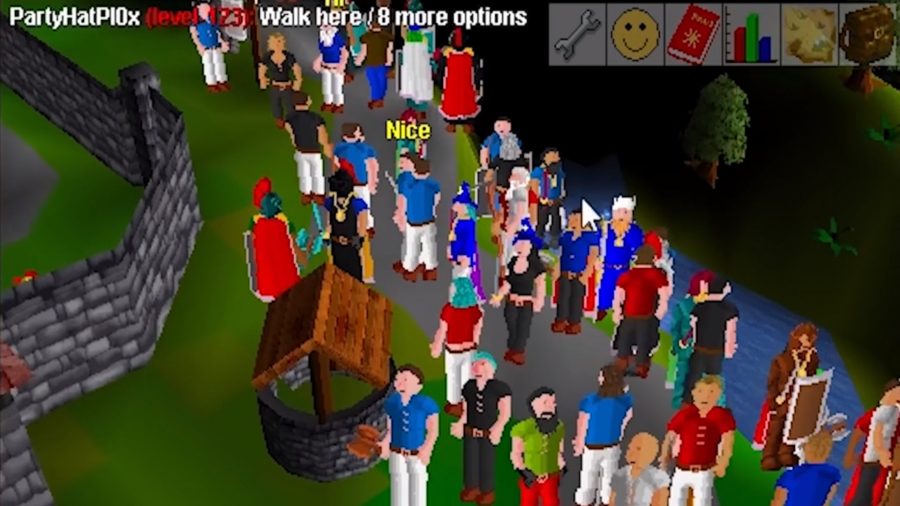 And so, most players tucked the party hat away in their in-game bank and forgot about it. “You have to remember, these are stat-less objects. You get no bonus whatsoever for wearing a party hat. Absolutely nothing. It’s just an object you wear on your head – it looks like a crappy hat. Our artists tried to redesign them many, many times and we were like ‘no, no, no, no, no – that is what they look like’. They’re supposed to look like some awful little tissue paper thing that barely fits on your head,” Ogilvie says.

Not long after that 2001 Christmas event, Runescape’s designers started changing the way they handled holiday events. Compared to the game’s modern events, 2001’s Christmas cracker drops were pretty tame. By 2005, the Halloween event had changed from dropping pumpkins that players could eat to a Ghostbusters-themed dungeon with a unique weapon. The rewards got better, too – help Diango clear his workshop of ghosts and you got a full skeleton costume with an alternate jack-o’-lantern helmet. Most of these rewards were also released as non-tradable items, so they didn’t affect the game’s economy.

For the first year, most players assumed the party hat might make a return some day, and the main factor steering their increase in value was an influx of new players, which naturally led to gold inflation. At this time, there was no Grand Exchange in Runescape, so all trading was done player-to-player, making it very difficult to get a consistent price on anything. 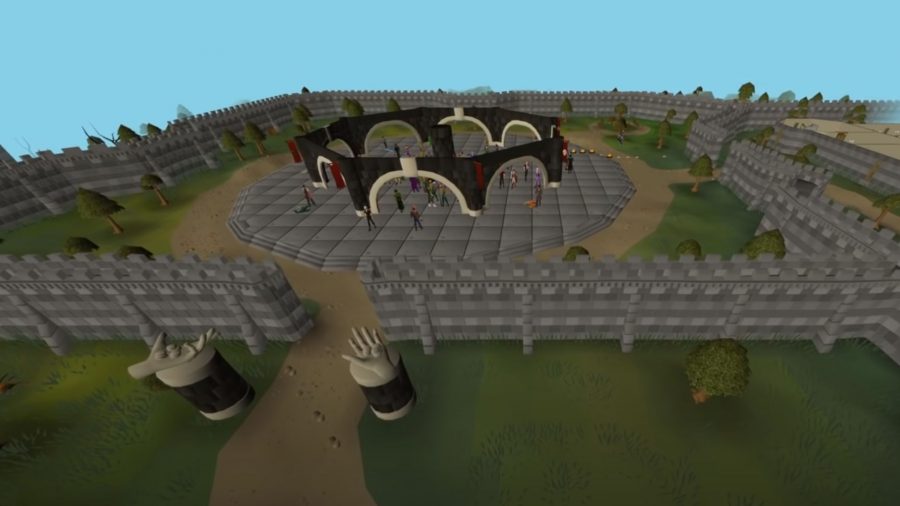 Shortly after 2002’s Christmas event the penny dropped – the party hat was not coming back. The realisation that their supply was now finite followed, and drove their first significant price increases. It’s estimated that they reached a peak of around 15 million gold pieces in 2003, before temporarily tanking after players discovered an item duplication glitch. But it was only one year later that party hats recovered their value, returning to 15 million, and a further six months for them to double to 30 million. After two more months? 75 million. By early 2006, a single party hat could sell for 190 million gold pieces.

The prices continued to rise, but they shot up dramatically in 2007 after the Grand Exchange was introduced to Runescape. This is a centralised marketplace that effectively makes the economy transparent. You can set up any trade you want, look for trades for specific items, or just window shop for things you can’t afford. It also made it very easy to find out how much items were worth, which only caused the prices for the rarest items to go through the roof. And as the game continued to expand, with new content and millions of new players bringing more gold into the economy, the party hat remained in finite supply.

“They grew in value because they told other players that you were a proper, serious Runescape player – that you were there in 2001 when the party hats dropped,” explains Ogilvie. “Whether they actually were or not wasn’t the point – the fact that they owned one was a massive status symbol.” 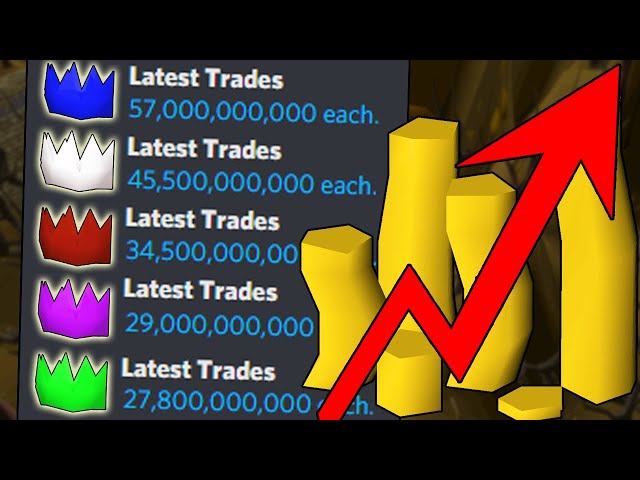 By 2015 the party hat reached ‘max stack’ – the maximum amount of gold that you can trade in a single transaction. That’s 2.1 billion gold pieces, an increase in value of 447% over eight years. This hasn’t stopped their rise in value, so now players just trade stacks of valuable items worth more than 2.1 billion gold. And, although illegal, there is a real-world value to these items because of Runescape gold sellers. According to Runescape YouTuber FlippingOldschool, the most sought after colour of party hat, blue, recently sold for 57 billion gold pieces, which puts its value at roughly $6,700 USD, or £5,000 GBP.

For obvious reasons, the party hat means quite a lot to Runescape players, and Jagex has acknowledged this by routinely trolling them with references to the rare item. Recounting one April Fool’s prank, Dave says “because party hats are often shortened to p-hats by players, we gave them a pea hat, which was a little pea you could strap to your head. We’ve also done party hats everyone can get and wear for a day, party hats that rip when you go to put them on your head, and there’s a dimension in one quest where you can find a chromatic party hat with all of the party hat colours, but it’s upside-down.”

The trolling goes both ways. “There was a Baby Troll pet we released into the game,” says Ogilvie, “and it takes the name of whatever item you first feed it. Running around the game it wasn’t long before we came across the first Baby Troll called Party Hat, and we were just like… the audacity to sacrifice something like that. And we had all sorts of messages that would pop up to warn players before using or dropping a party hat, and they did it anyway.” 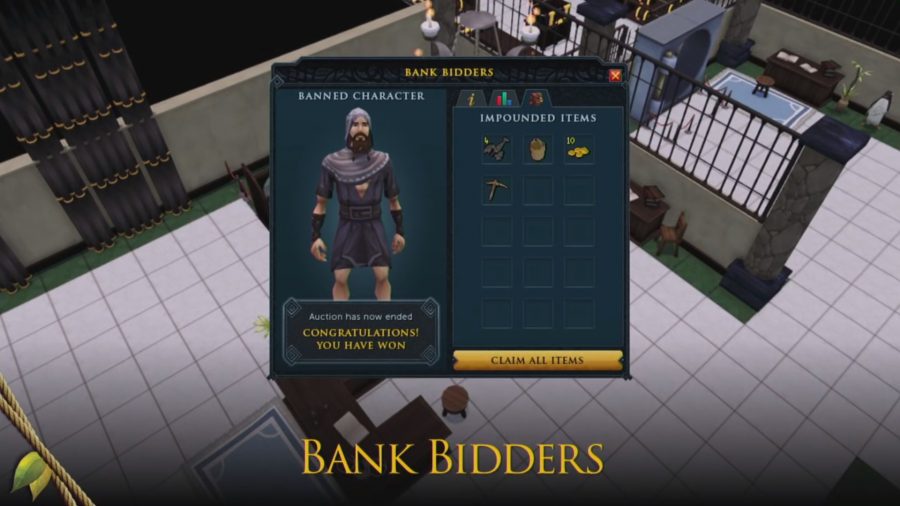 There are urban myths about dormant accounts with hundreds of unopened Christmas crackers, something Jagex almost turned into a Storage Wars-inspired mechanic, but shelved following a divided community reaction. It was announced at Runescape’s annual fan fest and everything, which we reported on back in 2016, but it never made it to the live game. “Party hats are largely the reason that idea died,” Osborne says, “because players didn’t like how it might affect the number of party hats in the game’s economy. The rarity is part of the fun. So yeah, party hats killed my update.”

More like this: Check out these free MMOs on PC

In the 19 years since first arriving in Runescape, no other rare item has made such a lasting impact on the game, its lore, and its players than the party hat. So, how has it affected the developers? “As a game designer,” Ogilvie says, “you want your most valuable objects to be the ones you designed to be the most valuable object. You want it to be the most powerful sword or a super rare cosmetic in a treasure trail that has an incredibly low drop rate. But, we’re Runescape designers, which is something completely different. So you can apply that logic, but what players do with it once it’s out in the wild? That’s not in your control anymore, and we love that.”

Frustrating from a design perspective? “Yes, kind of,” Ogilvie admits, “But from a Runescape perspective it is absolutely 100% bang on.”