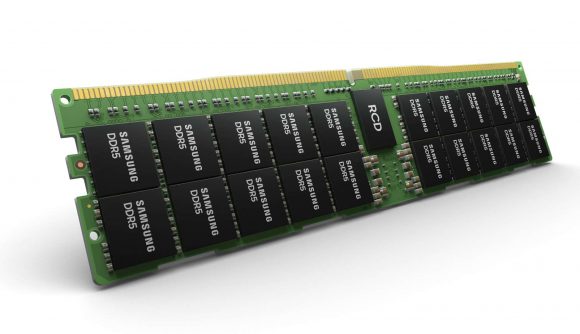 DDR5 RAM will find its way into gaming PC builds later this year when Intel Alder Lake arrives, although most people will be sticking with similar capacities to the current sets of best gaming RAM. We heard earlier this year that Samsung was working on a mammoth 512GB DDR5 stick, but it looks like even larger capacities could be on the way, after it announced that it’s developing a new 24GB module that’ll be able to fit up to 768GB onto a single stick (via Tom’s Hardware).

Sticks of this capacity are currently extremely overkill for gaming, not to mention a price tag that’ll make it more suited for server and enterprise rather than consumer use. The development is still great news for gamers, however, as these new 24GB chips could also be used on less-expensive consumer RAM sticks, allowing for much higher memory amounts than is currently possible.

Looking back to the early 2000s, your average PC had less than 1GB of memory. Now that a typical gaming PC has over 16 times that, it’s not implausible that your average PC will have a memory capacity stretching into triple figures in the future.

Samsung hasn’t set a release window for its updated DDR5 chips, so don’t expect to find a 768GB DDR5 stick available for purchase later this year – even if your wallet could stretch to its presumably high price point.