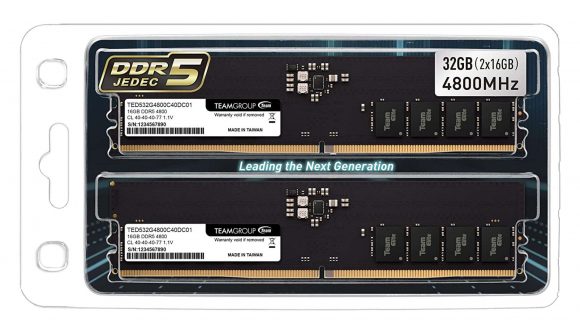 Teamgroup launched its first DDR5 modules last week, comprising two 16GB sticks running at a conservative 4,800MHz – the sort of speed you can expect the most common kits to run at, even if the future best gaming RAM has the capability to hit speeds of up to 8,400MHz. Surprisingly, the memory has already found its way onto a US Amazon listing, and if you buy it, the delivery driver should knock on your door with a box of fifth generation sticks before the end of July.

It’s not a complete waste of time getting your foot in the door sooner rather than later, however. None of the current best gaming motherboards support the new standard, but grabbing DDR5 at MSRP means you won’t get caught off guard with the unpredictability of DRAM prices that saw DDR4 rise earlier this year.

As the first DDR5 modules to hit retail, they’re not the cheapest set in the world, coming in at $310.99. For comparison, two 16GB sticks of Teamgroup’s RGB-clad DDR4 RAM will set you back almost half the price at $164.99. This will likely be the same story for the entire first wave as brands such as Corsair, Crucial, G.Skill, Kingston, and more hop on board.