Buddying up with Harmon Kardon for the 360° audio, Samsung’s ArtPC Pulse looks like a compact dehumidifier but packs an i7, an SSD and a discrete AMD GPU inside.

Considering the ArtPC Pulse is just over 12 inches tall that’s a whole lot of PC tech to be jamming inside such a small frame. There are a pair of different versions set to go on sale at Amazon on October 28 this year. The lower spec machine comes with a 2.7GHz Core i5 Skylake processor, rocking 8GB of DDR4 memory and with a 256GB solid state drive. For $1,199 that comes with a 2GB Radeon RX 460 GPU to take care of the graphical duties.

Taking up about a quarter of the ArtPC Pulse’s height is the Harmon Kardon 360° audio driver which sits atop it like some super-techie Pringles party speaker. Samsung have a relatively wide range of dedicated 360° speakers but this is the first time they’ve jammed one on top of a PC.

Admittedly it’s a pretty limited machine, designed more for the home office than for any meaningful man-cave gaming setup. That said, the RX 460 will still net you at least 30fps in the latest games at their highest 1080p settings. Lower your expectations a touch and even with the 2GB version you should be able to nail playable gaming levels from this little tube-o-tech.

The RX 460 isn’t the hottest-running GPU around – the Asus Strix version we tested hit 63°C at its peak – but when you’re building machines at this scale the cooling array you use has to be the toughest challenge. It’s likely to be a passive heatsink setup as there are no fan outlets I can see. I’m sure Samsung will have made sure there’s no chance of it overheating though, right?

In terms of its connections there are just four USB 3.0 sockets on the ArtPC Pulse, with an extra USB-C slot too. There’s also an SD slot, a 3.5mm headphone jack, an ethernet port and a HDMI connection too. 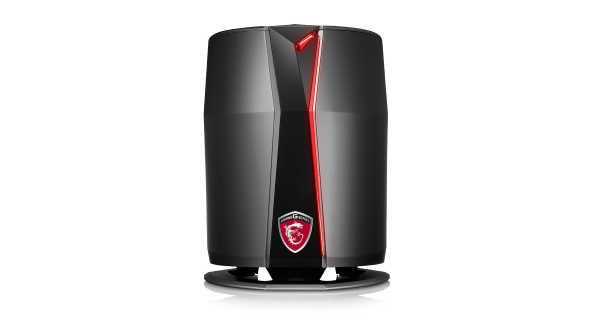 The Samsung ArtPC Pulse is shipping in the US at the end of October but we haven’t seen any plans as yet for the machine to hit the UK. But they aren’t the first to go for this sort of design – obviously first came the Mac Pro, but HP have followed suit with their triangular B&O Play (an experimental offshoot of Bang and Olufsen) designed machine. That also has a 360° speaker on top of it, but lacks the GPU power of the ArtPC Pulse.

But if you want serious gaming performance from a pedal-bin-looking PC then it’s the MSI G65 Vortex you’ll be wanting. That mini rig packs a pair of GTX 980 GPUs in SLI in its diminutive innards.