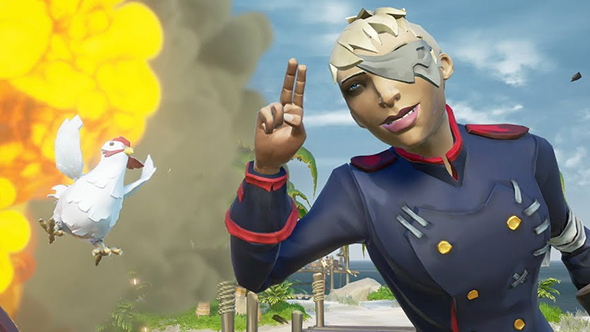 Update, April 13: Rare have detailed the content roadmap for Sea of Thieves.

Sea of Thieves has set sail, the server problems are under control, and Rare have a handle on the early fixes for the game. But even among the game’s fans, the question has been how the game’s sparse content will be expanded post-launch. Today, Rare detailed those plans, which begin in May.

Six “major” content updates are planned for the remainder of 2018. The first of these is The Hungering Deep, which releases in May, bringing a “new AI threat” to the world which crews will have to work together against to defeat. The update also adds new mechanics and unique rewards, though there aren’t any specifics on what those will be just yet.

Two more updates follow this summer. Those include Cursed Sails, which adds a new ship type, and Forsaken Shores, which adds a new area to explore, each bringing more of those as-yet-unspecified new mechanics and unique rewards. One of the ideas floated for the updates is some sort of “cursed cannonball.”

Starting with the May update, the game will also have weekly events and challenges highlighting all the new content. Those events are set to continue in perpetuity, as three more major content updates come through in autumn and winter.

It’s a promising pitch for the game’s updates, and we’ll soon see how Rare beef up the Sea of Thieves experience.

Update, March 21: Sea of Thieves’ executive producer has responded to player concerns regarding the depth and breadth of the game’s content. Joe Neate toldIGNthat there would be more content incoming.

Sea of Thieves launched on March 20 after a string of betas and stress tests, but several players on the game’s subreddit have expressed concerns that the game didn’t have enough content to sustain a long life. In response, Neate says that the game will be updated with new cosmetics and mechanics as time goes on.

Neate’s statement syas that “Sea of Thieves is designed from the ground up to be a game that grows and evolves,” and that Rare “will release new cosmetic options […] alongside new mechanics and ways to play.”

Rare have previously said that they will not be releasing a roadmap for Sea of Thieves, as they want to “show not tell” when it comes to new features. That makes it pretty difficult to know what the new content will include, but it’s a fairly safe bet that there’ll be plenty of new cosmetics at the very least.