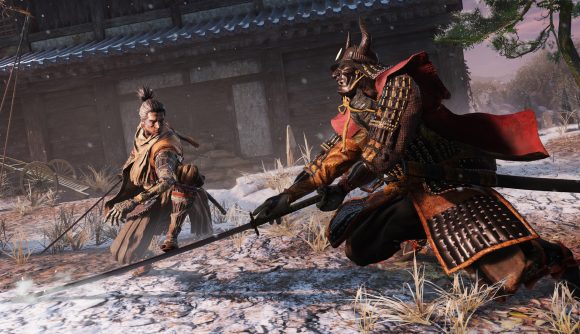 Sekiro: Shadows Die Twice ditches the traditional RPG leveling system of the Souls games, but you will grow in power and be able to customise your character over the course of the journey. Instead of souls, you’ll get experience points from defeated enemies, but instead of boosting your stats with each level, you’ll spend skill points to gain new abilities along a set of skill trees.

You’ll have to unlock skill trees by finding items in the world, but they’ll each be focused on certain types of abilities. Choices along each of those lines can include passive buffs and active abilities, as well as combat arts, which are special moves meant to feel rewarding for particular playstyles.

From Software showcased three skill trees for Game Informer. The shinobi tree is focused on evasive abilities and crowd control, the samurai tree points toward straight melee, and the prosthetic arm upgrades offer more options to vary up your encounters. Shuriken throws, for example, can be upgraded to toss more than one, or to follow up your throw with a lunging melee strike.

For upgrading more basic stats like health, Sekiro takes the Zelda approach – you’ll need to look for prayer beads, and picking up four of these items will offer a buff to your health and posture. You’ll also find tools in the world to upgrade your arm with new stuff, like an axe or a flame vent.

You can see a bit of this in action through the video above. Game Informer is going to have a big look at Sekiro’s throughout the month, so we can look forward to much more info on From’s latest.

The Sekiro: Shadows Die Twice release date is set for March 22, and you can follow that link if you want to catch up on the details of everything we’ve heard about the game so far.