Key art and logos for the next Tomb Raider game have been posted online. If legit, Lara Croft will be spending at least some of her next adventure in Central America, and it will indeed be called Shadow of the Tomb Raider, confirming an earlier leak.

Click here to read of exciting upcoming PC games that we actually know are happening.

A NeoGAF user named NeoRaider found the material at an ad agency’s website (here’s the URL, but at time of writing, the whole site is down for maintenance, presumably while they fix their error in uploading the material early). 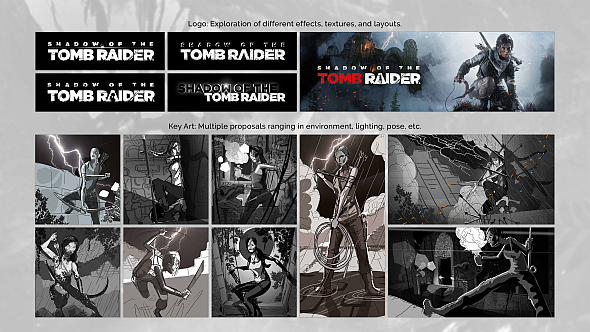 As you can see in NeoRaider’s screengrab, key art of Lara shows her in stormy weather with stepped pyramids in the background, hinting at an Aztec or Maya setting. We can also see her wielding a whip, a machete, and a spear, as well as her customary bow. Another panel shows her hiding behind a corner with a number of arrows stuck into a temple wall, so it seems some of her opponents are just as fond of archery as she is.

Check out the original post on NeoGAF for a bigger picture. It all looks fairly legit, but we still haven’t heard anything official from franchise publishers Square Enix. As some in the NeoGAF thread point out, we might’ve expected an announcement at E3. Given that we didn’t get one, it’s possible it’ll drop at Gamescom.

Shadow of the Tomb Raider’s existence was first hinted at when a sharp-eyed commuter photographed someone’s laptop on a Montreal train. It’s looking pretty legitimate now.