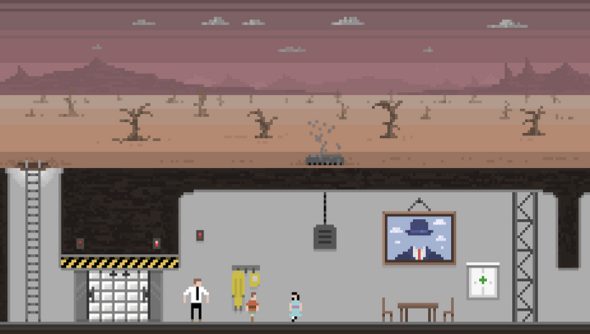 Surviving the end of the world, in a game, usually means there’s a combat-heavy journey ahead of you across irradiated wastes. Not so in Sheltered, Unicube’s management sim. The survivors in question are a family, and they are already safe (relatively) in their underground shelter.

This is a game about keeping them that way.

Continued survival means that family members must eat and drink, stay well and not go insane. That might not happen, though, as supplies grow scarce, vital parts of the shelter start breaking down, and the desperate survivors above attempt to get in.

Those other survivors are where moral quandaries rear their heads. They can be given shelter too, but that’s another mouth to feed, an unknown quantity that might just be biding its time to betray its saviors.

As we’re getting a bit set in our ways in regards to the end of the world, making it a bit mundane instead of something dreadful, it’s amusing to think that something as normal as looking after a nuclear family could actually shake things up.

Today, Worms developer and indie publisher Team 17 announced that Unicube has joined the studio’s third-party publishing program, joining Overruled, which teamed up with them a couple of months ago.

“The minute we saw the concept we absolutely knew we wanted Sheltered to join our indie partner program, in fact it was a total must!” Debbie Bestwick, Team17’s Managing Director says. “I think the process from our 1st look to signing it actually took around 48 hours, which shows not only the speed of which we move but also the belief both parties have in each other. Sheltered will be a very special game with huge potential, we’re really excited about working with Dean and Sonny over the course of the year and helping them create their first commercial indie game!”

Sheltered is due out next year, and it’s already been crowdfunded on Kickstarter – though there’s still time to become a backer.