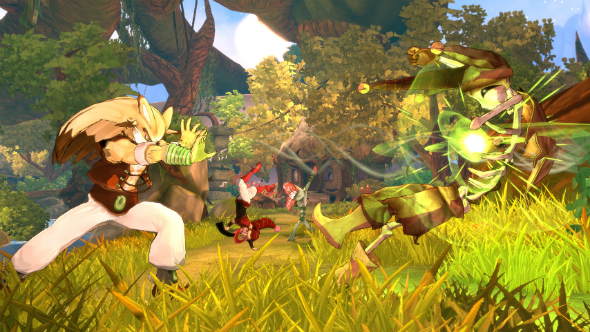 Kickstarted, indie-developed RPGs don’t look like Shiness: The Lightning Kingdom. It’s got enough systemic clout to put a great deal of its triple-A siblings to shame, and that’s without considering its Naruto-inspired fighting mechanic. It’s also gorgeous, with an art style that incorporates everything from the whimsical surrealism of a Studio Ghibli film to the cel-shaded vibrancy of The Legend of Zelda: The Wind Waker. The only suggestion that it’s not being made by a seasoned JRPG studio is its length – it’s developers believe it will take between 20 and 50 hours to complete depending on how much of its world you explore. A veritable lightweight, by that genre’s standards.

For more complex systems and dressing up, check out the best RPGs on PC.

RPGs and sandbox games that take upwards of 100 hours of time to fully explore are still the norm. There’s a perceived value for money in stretching game mechanics to their repetitive brink in order to eke as much playtime out of a title as possible. That means worlds that are bloated with fetch quests, loot and grind-based systems. Shiness has almost none of this: the focus of developers Enigami rests solely on the game’s main narrative arc.

As such, they’ve eschewed the traditional progression path of most RPGs, where the player goes from a humble brawler to a bona fide demigod over the course of the game. There are still abilities and skills to unlock, but you can never master every skill in the game, because the further each character ventures down one elemental specialisation, the less effective they become with other elements. You won’t have to spend hours massacring wild boar in the woods or repeating dungeons to get anywhere, but instead you’ll still see the skills of your five character’s grow naturally over the course of the game.

Loot also takes a backseat in Shiness: The Lightning Kingdom (pronounced ‘shy-ness’, since you ask). There is still new gear and martial arts weaponry to acquire for each of the game’s five characters, which you obtain through the traditional means of questing and hunting the world’s various creatures. Loot and wearables provide your characters with stat boosts, but they don’t directly affect combat in the way that a new weapon with greater reach or a unique attacking stance might. The game’s art style ensures that magnificent, skull-clad greatswords are out of the question, and as a result, so is beheading your enemies.

Instead of a focus on gore and gear you’ll find a fully-fledged fighting game nestled away inside Shiness: The Lightning Kingdom’s action-RPG exterior. Fights are always one-vs-one encounters: your party members can offer support from the sidelines or replace you in the bout, but you’ll never have to deal with more than a one enemy at a time. Fights take place in magical arenas where the elemental type of the arena dictates the effectiveness of any given spell or attack. Additionally, the arena’s elemental state is rarely constant, forcing the player to either switch up their attacking style until the arena matches their character’s spells, or swap in another party member who is better suited to that elemental type. These elemental buffs also apply to your foes, meaning you’re only ever an elemental shift away from the battle turning in your opponent’s favour. 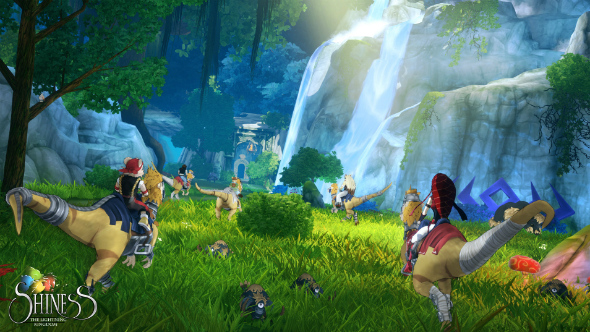 Every fight I was shown during the brief hands-off demo of the game’s latest build looked tough. Even the game’s designer, Karl Lallonier, broke a sweat whilst going up against what looked like a standard enemy, which leads me to believe that Shiness’ sweet exterior masks a punishing and complex fighting game. Lallonier then loaded up an end-of-dungeon boss battle, and it was there the full scope of the fighting system came into view. Devastating combo after devastating combo landed, but still Lallonier struggled to finish off his half-spider, half-king rival. Every time it looked like he was about to deliver the killing blow, the boss reeled off a succession of perfect blocks before going on an attacking spree of his own. In a matter of seconds I felt like I’d witnessed a thousand button presses.

While all of this was going on, the two other members of Lallonier’s party were chiming in from the arena’s edge with supporting spells and effects that offered everything from healing effects to elemental buffs. Just as you develop your characters abilities and skills through your style of play, you also gain new passive and support abilities for your character to use from the arena’s edge. Every character has two roles to fulfill, which makes choosing your party as important as developing the individuals within it.

It’s not a half-baked, tacked-on fighting game mechanic – it’s the real deal, which is evidenced by the myriad nods to Street Fighter movesets, like Akuma’s purposeful animations and Hadouken combos. It’s easy to forget, even after a relatively short demo, that Shiness isn’t a thoroughbred fighting game. 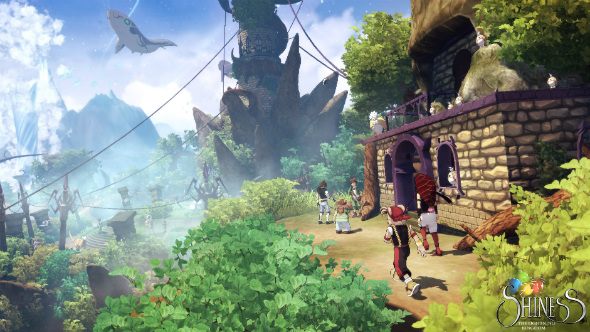 In the same vein, there are also a number of puzzles in the game that block off different areas of the game’s world until the player recruits the next party member, thus gaining access to their unique puzzle-related skill. I didn’t expect to be impressed by this mechanic, but it was both simple enough to draw in my attention, and complex enough to leave me scratching my head as Lallonier broke its various pieces down to me. Those character-specific puzzle mechanics also play a role in general world exploration – for example, you can use Askel’s whip to reach far-away objects, or light dark dungeons with Rosalyn’s fire affinity – and while the reward will never be a bone dagger or greataxe, completing side quests and finding parchments does at least expand your moveset.

Oh, and all this without mentioning that Enigami developed their own language with the help of two postgrad linguistic students, all in an effort to further ground the game’s mythical setting – English voiceover will be available too, if you’re not up for 20-50 hours of subtitles.

Clearly, an exceptional amount of effort and care has been poured into making this project as lavish and elaborate as possible. All I’ve seen of Shiness has been systemic, so it remains to be seen how comfortably these mechanics bed with the game’s world and narrative. Game producer Hazem Hawash cited publisher Focus Home Interactive as a hugely helpful guiding hand since joining the project, prompting Enigami to cut a number of planned systems in favour of streamlining the core action-RPG experience. It’s easy to read that as a negative, but one can’t imagine Shiness suffering from a lack of depth even if it was stripped of everything but its combat system.

Shiness: The Lightning Kingdom is slated for release in early 2017.