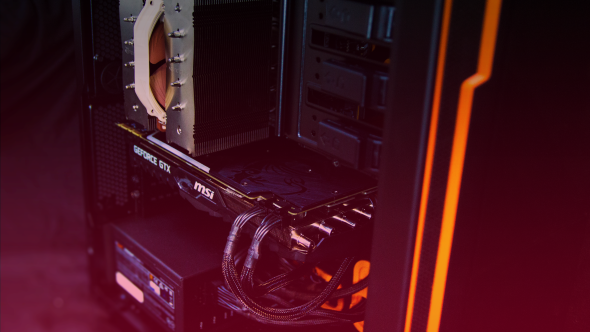 We’re a bit fed up here at PCGamesN. These gaming PCs are just too damn loud, and something has to be done about it. We’ve done our best to put together a silent gaming PC build that is almost devoid of moving parts and nearly manages to produce zero noise whatsoever… Fine, not silent then, we’ll call it a very, very quiet gaming PC.

Want the best liquid cooler for your rig? Here are our top picks.

We’ve outlined our choices for components and why we chose them below, but we’ve also thrown in a few extra tips to putting together a near zero-decibel build if you fancy tiptoeing in our footsteps. 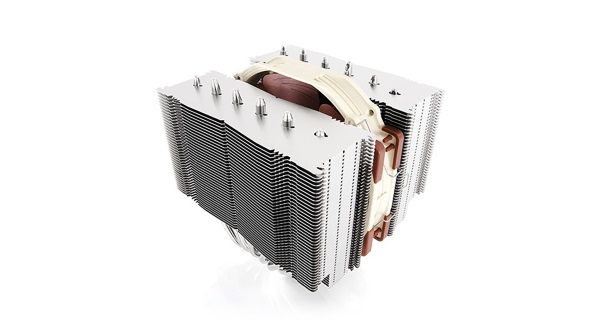 First up, the CPU. While the TDP of our chosen chip can make a difference to the cooler we decide upon, we aren’t focusing too much on this for our build. We’ve decided to go for Intel’s i7 8700K, because we’re gamers at heart and don’t want to compromise on frame rates.

This also means we can rock the Asus TUF Z370 motherboard. We decided on this board mostly because it has slight hints of yellow, and they kind of match the orange highlights on the Be Quiet! Silent Base 600 case we’ve opted for with this build. Want to know the best bit? You can’t even see the mobo in this case, so how it looks is entirely redundant. Oh well, it’s also a great value-for-money mobo, too.

What really matters for our very, very quiet PC build is the chip chiller we’ve settled on. You’ve got plenty of choice when it comes to CPU coolers. To narrow down our choices a little, we’ve decided to eliminate any and all liquid coolers from the lineup. It’s nothing against these loopy chillers, but we couldn’t install a suitable custom loop in this build, all-in-one pumps can get a little too noisy for this build, and we need the extra ambient air-flow an air cooler offers. 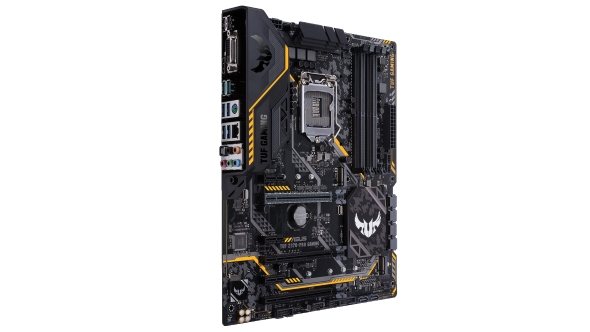 What we finally settled on is the Noctua NH-D15S. This is the single fan variant of the NH-D15 and features a ginormous dual-heatsink design. Paired with the single 140mm fan, this chunky air cooler provides enough thermal dissipation to keep temps low and noise to a minimum.

The 140mm fan is also important to our choice of air cooler. Smaller fans tend to have to work harder, or spin faster, to keep temps to a minimum, and this means they are often much louder. A larger fan can do less work while still remaining capable of getting the job done, but you don’t need to go over the top. A 140mm spinner will be just fine for today.

If you really are set in your ways and want a liquid cooler for your chip, there are ways of keeping the noise down. Again, fan choice is important, but since you are limited to the size of your radiator, the type of fan you choose will be key. Maglev fans are a good choice and remain extra-quiet under load. You can either pick these up seperately, or choose a cooler such as Corsair’s H115i Pro that comes with a pair of maglev fans in the box.

If you have really keen hearing, you could potentially pick up an entirely fanless heatsink design. These tend to come in the form of extremely large heatsinks (so check for compatibility with your case!), designed to spread the heat out over a much greater surface area for the best passive cooling potential, and often utilise heatpipes efficiently to prevent heat lingering around your CPU.

There is a drawback to these fanless designs, however. While they offer completely silent operation, they often only come with enough cooling power to keep low-TDP chips chilled. That would mean the K-series chips are off the table, which may or may not be worth the silent operation for you.

No, for now, we are sticking with a chunky air cooler. It has all the cooling potential we require, but it also offers another benefit. Thanks to that single 140mm fan, we can actually remove the fan from the rear of our case. Our temps may be a little higher in return, but for the aural performance of this particular build, we will sacrifice a few degrees. 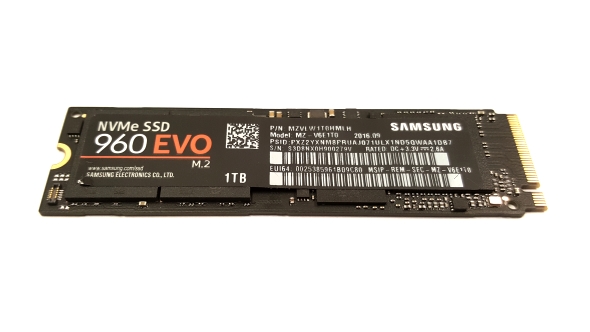 We want as few moving parts in this silen… very, very quiet gaming PC as possible. This means we are ditching any hard drives that would have otherwise made the cut. Instead, we’ve opted for some entirely static solid-state drives.

The Samsung 960 Evo is a fantastically speedy M.2 drive, but we’ve also installed a regular ol’ SATA drive in this build for a little more pure data space for our Steam library.

If you don’t want to ditch your hard drives just yet – high-capacity SSDs are outrageously expensive – you can still try and minimise the sound of those platters whizzing to life by ensuring a rubber interposer layer lies between the case and the drive. The Silent Base 600 comes with some of these useful rubber dampeners, but you can always grab some rubber grommets that will fit most 3.5” bays. 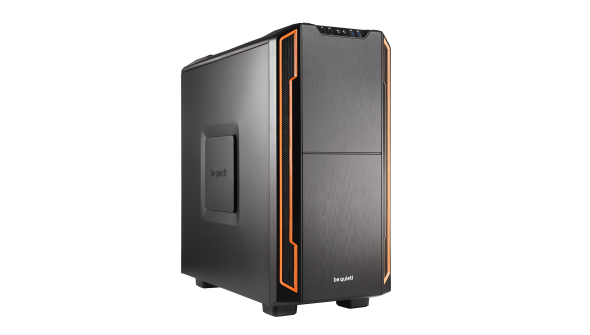 As we mentioned previously, we have chosen the aptly-named Be Quiet! Silent Base 600 mid-tower chassis for this build. It’s completely optimised for silence with sound dampening material, rubber grommets galore, and no leaky side panel window.

In lieu of that window onto our totally colour-accurate motherboard, Be Quiet! have instead fitted some thick sound dampening material to prevent any noise leaking out through the thin metal covers. If you fancy some of that material for your own case, you can always pick up a roll and kit your own chassis out yourself.

We started out with only a single case fan installed front and centre in the case, but after some initial performance and thermal benchmarking, we chose to ditch this fan too – leaving only the CPU heatsink and GPU shroud fans in the build. 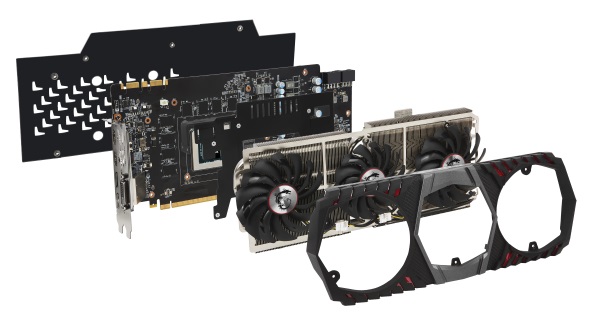 We’ve chosen the beefy MSI GTX 1080 Ti Gaming X Trio for this build because we don’t want to have to sacrifice any potential performance in our quest for silence. Luckily, this graphics card features a triple fan design, and some seriously beefy heatsinks, so noise isn’t an issue.

With the GP102 GPU at its core, it can handle any games with ease, but it also manages to cool entirely passively up to the 60°C mark. The resulting noise output for this graphics card is exceptionally low, and that’s what we like to hear… or not hear. You know what I mean.

If you can’t drop a weighty wad of cash on a single graphics card, or already have a suitable GPU raring to go, you can instead fit a custom cooler onto your card. Arctic and Raijintek offer some seriously chunky heatsink designs, among others. They don’t quite look as sleek as the fan and cooler designs you’ll find on a third-party card out of the box, but they potentially give you the freedom to choose your own full-size fans, and they do have a certain je ne sais quoi about them.

You can also tear off that preinstalled cooler and replace it with a liquid cooler cold plate. Brackets from various manufacturers can be found online, such as NZXT’s Kraken G12, or you could always DIY your own backplate and fitting. Just be careful, that GPU die is immensely fragile, any uneven pressure and it could crack – and that’s game over. As with the CPU cooler, the pump will likely add a little excess noise into the equation. 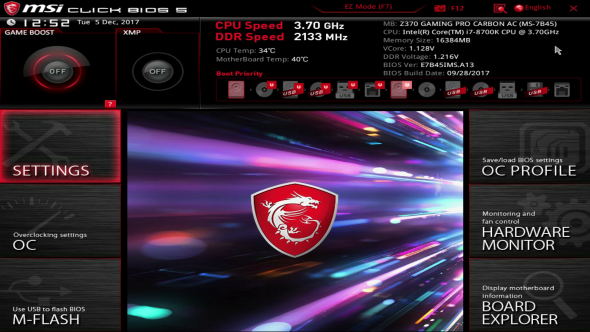 Once all your hardware has been suitably hushed in your case, there are still a few tweaks you can make in the software to save a few extra decibels. We’re going to tweak our fan curves a touch to get the perfect balance between cooling and volume. You can always select one of your BIOS fan curve presets if your board has them, but for today we are doing some manual labour. Clicking the mouse and stuff… real hard work.

Locate your fan curve settings in the BIOS (press Del or F2 at startup to enter BIOS) and start changing those values. It’s a pretty self-explanatory system for most boards and manufacturers, and usually it involves picking steps on a graph.

The more gradual the curve of the graph along the x-axis, the slower your fan will spin as temperatures ramp up. Of course, you don’t want temperatures to spiral out of control, and it becomes a real balancing act for the perfect ratio.

Top tip: try and keep your values as smooth as possible, without any sudden step ups to much faster speeds. Sudden changes in fan speed are much more noticeable in pitch and tone than consistent speeds can be – even if your fan runs a little higher as a result – which can potentially ruin the ‘silent’ experience.

Just how quiet is it? 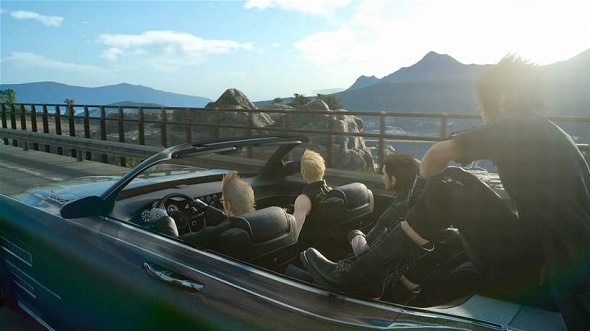 We’re pretty proud of how this build came out. We didn’t sacrifice any major performance and it’s nearly inaudible with the side panel even under heavy gaming loads – if only it weren’t so expensive, but that’s a problem you can find an answer to in our best gaming PC build guide.

As for temperatures, even without the case fans, these components are more than capable of holding their own. The MSI GTX 1080 Ti Gaming X Trio idled at 45°C, while under load it reached a whopping… 69°C. That is a seriously capable cooler, all right.

As for the CPU temps, the i7 8700K idled at 42°C at idle, and 85°C under load. A little warmer than we otherwise might be happy with, but nothing this CPU cannot safely handle.

If you want to hear how quiet this build is for yourself then you can watch our noise tests – along with a full breakdown of the build and components – in the video linked at the top of the page. Seriously, it’s right there.