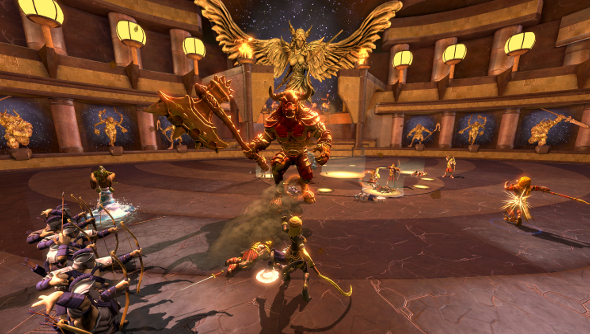 Update: Smite is out now on Steam, so we’re republishing our review from when the game initially released. Additionally, we’ve overhauled our guide to Smite gods . We’ve also got 15 Ultimate God Packs to give away, and don’t forget to try the game for free here.

“So it’s another free-to-play MOBA,” I thought to myself as I browsed the gargantuan character selection screen in Hi-Rez’s Smite. At least the premise, where gods from a variety of polytheistic faiths kick the absolute crap out of each other, is novel. But there are just so many of them – MOBAs, not gods – and I felt my energy dwindling.

But Smite is invigorating. It’s not another MOBA. It takes one aspect of a MOBA’s structure and builds on it until it’s something else entirely. Smite has developed into an action game. One with lanes, creeps and towers, all the things you’d expect from a MOBA, but even the familiar looks different when viewed from Smite’s refreshing perspective.

Smite eschews the strategic top-down view from League of Legends and Dota, and opts instead for a third-person action camera. This one change, ostensibly minor, is the root of most of Smite’s surprises, twists and eccentricities. It informs the rest of the design, allows Smite to stand out amongst competitors, and most of all… It’s great.

Bringing the camera down from the clouds and having it stick to the backs of gods has an overwhelming impact. It means that clicking around the battlefield is out, switched for WASD controls. By extension, clicking on areas or enemies to unleash spells and attacks has also been shown the door, replaced by an aiming reticle evocative of third-person shooters. 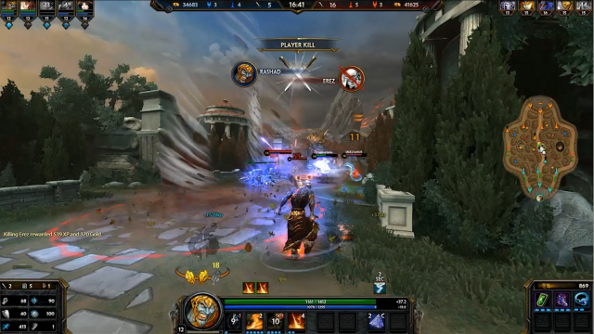 There’s a ferocious intensity in Smite that doesn’t often crop up in MOBAs. It comes from a greater feeling of direct control. The player is right in the thick of things. Some of it is an illusion born out of the perspective, but the necessity of aiming, skill shots for ranged characters and the limited view of the battlefield makes for a more personal experience. Players are their characters, they aren’t commanding them like a general.

Some of the strategy inherent in the top-down MOBAs has been lost out of necessity. Map awareness has been cut down considerably, with the third-person perspective limiting players to a very narrow field of view. But this adds more than it takes away. Ambushes become a deadly threat. There’s still the minimap and abilities that shows foes on it, but in the middle of a battle it’s very easy to get snuck up on. This extra element of danger weaves its way into all conflicts, giving them greater intensity and risk.

Having a buddy watching your back and a team that makes the most out of the quick commands (a couple of button presses and you can say all that you need to) becomes even more of a boon. The need for teamwork is ubiquitous in MOBAs, undoubtedly; it’s simply more pronounced in Smite. 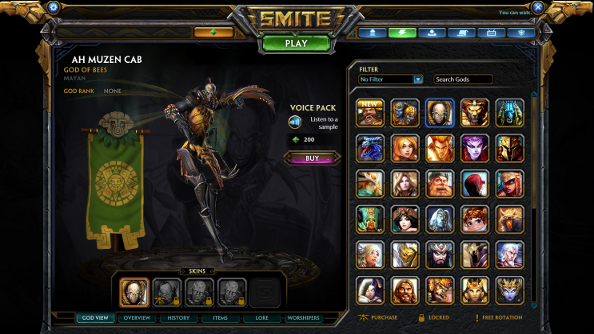 A single pantheon would have allowed Smite to have a significant roster of gods, but Hi-Rez has gone all out and included a strikingly diverse array of deities from several different belief systems including the Greek, Egyptian and Norse pantheons. A rotation of gods offers players the chance to take new characters for a spin, and spending favour earned in matches unlocks gods for use at any time. They can be rented too.

So there are a lot of ways to get one’s mitts on extra combatants. And it’s a good thing too, as most of them are worth throwing into battle at least once. Who wouldn’t want to throw bees at enemies as Ah Muzen Cab, the Mayan god of bees, especially when he looks like The Venture Bros’ Monarch. Or there’s Sun Wukong, The Monkey King, who can take a load off and chill on a cloud while a mirror image fights for him.

The vast range of powers all make sense, thematically linked and working their way into battles organically. The Monarch Ah Muzen Cab’s abilities all relate to his obsession or love or whatever his deal is with bees and his role as a hunter. He strikes from range and when foes get too far away, he has plenty of ways to close the gap. There are longer range attacks; sticky honey that slows enemy movement and infects them with the “Bees!” passive, adding a DoT effect; and even summoned bee hives that give a speed, healing and damage buff. 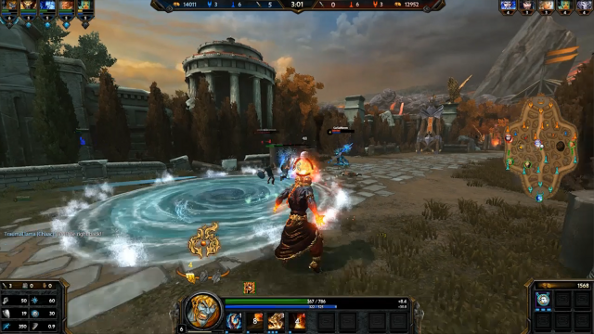 The spell effects are big, flashy things. Beams of fire shooting out of the sky and carving the ground, whirlpools that release the Kraken, towering walls of ice – they impress and intimidate. Their scale is convenient, as battles can get hectic and the small field of view can make it easy to overlook the threats. But there’s a psychological effect as well. These devastating powers make enemies daunting to face. You might be playing as a god, but so is everyone you’re going to face.

It was in Arena, Smite’s gladiatorial mode, where I cut my teeth in the never-ending war between inexplicably angry deities. There are no lanes to worry about, only a few towers by base entrances and the main objective is to kill the enemy. Points decrease as foes are dispatched and to a lesser degree when a minion makes it through the enemy portal. And in that big, open space, it gets messy. Ten gods just hammering away at each other, unleashing spell after spell, it’s Smite in its purest form, an action RPG about gods who want to fight each other.

Conquest is one of the game’s more traditional modes, featuring three lanes, towers and a maze-like jungle. But even here there are little twists, like the Titans, Smite’s answer to Dota’s Ancients. The Titans, though, they are pretty good at defending themselves. They live up to their name in size, and a few strikes from them and a god could be done. It can be a long fight. I’ve never played a Conquest game shorter than 30 minutes (Arena is usually 10-20), and a few have even hit an hour. 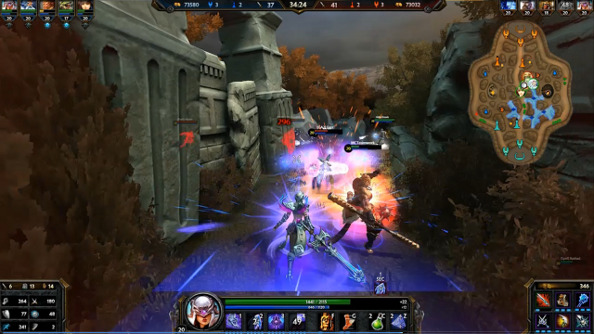 It’s why the surrender option exists, I suppose. It allows teams to forfeit the match if they feel they’ve already lost. I’ve only seen it used once, thankfully. I have seen startling comebacks, matches where an assured victory became a horrifying loss and many a triumphant moment occurring with the end in sight. And there are plenty of gods who really don’t shine until the late game, where they can evolve into genuine game-changers.

It’s a simpler style of MOBA. Items – while important – aren’t as dramatically impactful as they are in Dota and loadouts can be saved and applied automatically, letting you ignore item selection altogether once you have ones that you’re comfortable with. Effort has been made to get gods into battle as quickly as possible, and for the combat to be the focus over builds and strategy.

I never expected Smite to worm its way into my roster of games I keep playing after review. It’s a small number because there isn’t enough time in the day for more, but Smite’s going in there. It will likely be my go-to MOBA, at least until Heroes of the Storm. There are still almost 40 characters I’ve barely played, many not at all, and I confess that I might even chuck in a bit of money so I can grab some of the ridiculous god skins. Catwoman Bastet, Sith Lord Sun Wukong: they are absurd and I must own them.

Check ourguide toSmite gods. We’ve also got15 Ultimate God Packs to give away, andtry the game for free here.