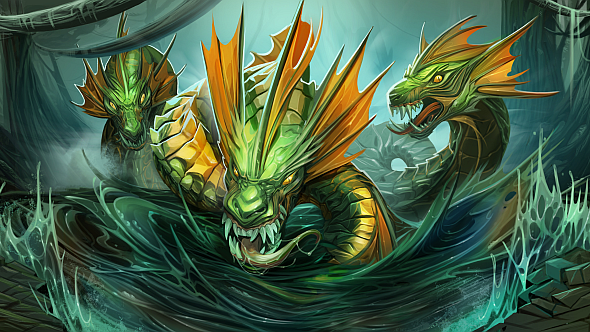 Smite, like most MOBAs, launched as a purely PvP game. That changed late last year with the first of the Smite Adventures, a series of PvE events, the latest of which is set to be the most ambitious yet.

Not enough mythology in your MOBA? Ease into Smite with our guide to the best Smite gods.

The Trials of King Hercules is a fully-fledged co-op dungeon, in which you and two other players will pick up quests from a town hub before setting off on your adventure, just like a proper MMO. Quests will award equippable items, and townsfolk will grant buffs in exchange for gold gathered from the dungeon.

You’ll have to consider team composition and coordinate attacks with your teammates to prevail, especially in the unlockable hard mode. There, you’ll face the Lernaean Hydra “for the ultimate loot and in-game rewards.”

“We are extremely excited to bring a full dungeon experience to Smite players for the first time ever,” says Travis Brown, project lead on Smite Adventures. “The Trials of King Hercules is our most detailed Smite Adventure to date with unique methods of progression, quests, mobs, bosses, and loot drops. If you ever wondered what it would be like to take your favorite Smite gods on an RPG dungeon adventure, now is the time to live that fantasy.”

Smite is free to play and can be downloaded from the website or on Steam. Like other Smite Adventures, The Trials of King Hercules is a time-limited event and will only be available during patches 4.10 and 4.11 – you can learn more here.