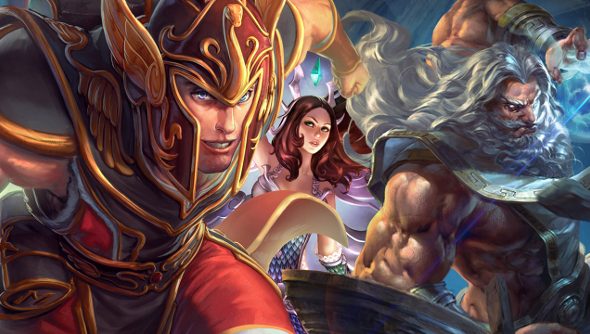 With only the North American regional championship left, Hi-Rez are spilling more details about the upcoming Smite World Championship, specifically the prize pool. It’s big. Really big. At $1.3 million, which will be split between only eight teams, there’s a lot of money on the line. And it’s not peaked yet, as Odyssey – Smite’s Dota Compendium analogue – continues to add more to the pool.

Eight teams will be fighting over the title and largest chunk of the prize money. The top two teams from North America, China and Europe, along with the top team from Brazil and top team from Spanish-speaking Latin America will meet in Atlanta in January for the World Championship.

Here’s how the prize pool will be broken down:

In 13 weeks, Odyssey – which increases the prize pool as people buy exclusive content – has added $700,000 to the pool, and there are still another eight weeks left. As it continues, Hi-Rez promises more Odyssey items, and today revealed the final reward: an angelic theme for Thanos.

It’s really quite nifty, as it changes during matches, becoming increasing ornate until it gets to the point where it wouldn’t look out of place in Darksiders.

Aquila and SK Gaming fought to become the European competitors this weekend. Aquila won the regional championship, with SK Gaming making it to the finals. Both teams were wildcards, beating the top seeded teams Fnatic and Mortality.

The North American qualifier will be fought on November 22nd and 23rd, and then the top two teams will join the others in Atlanta on January 9th.