A little local knowledge for you: Snake Pass is a windy deathtrap of a road that connects the two northern English metropoli of Manchester and Sheffield. It specialises in the kind of dangerous bends and blind peaks you’d associate with a Japanese stage in Forza.

It’s also the name of the new 3D platformer from sometime Forza developers Sumo Digital. Which should tell you three things:-

1. The platformer is about a snake.

2. Sumo aren’t too fussed about the international market getting the joke.

3. The platformer is also a driving game.

A very peculiar driving game about literally passing a snake through vertiginous levels that recall Banjo-Kazooie, but a driving game nonetheless.

The right trigger gets you out of neutral. Twisting this way and that with the left stick helps you accelerate. And by pressing A you can lift your serpent’s head, as if compelled by the instrument of a snake charmer.

That last part’s important, because most of your roads go up. Each level in Snake Pass is an obstacle course of sharp inclines and sheer cliffs you navigate by coiling around bamboo protrusions – reaching upward towards collectible blue orbs and the floating aztec shapes that allow you through a portal to the next stage.

At first, you’ll struggle. As with Grow Home – another experimental project from a triple-A British studio – you’re grappling with a control scheme and a character who isn’t quite doing your bidding. But gradually, you internalise the competing forces of gravity and momentum. Subconsciously, you come to realise that climbing success depends on you wrapping your neck around sticks for purchase.

“The puzzle is in how you manipulate the character,” says designer Barry Soilleux. “That’s why we don’t have any enemies in the game. We wanted you to have that opportunity to stop and think: ‘How do I get up there?’” 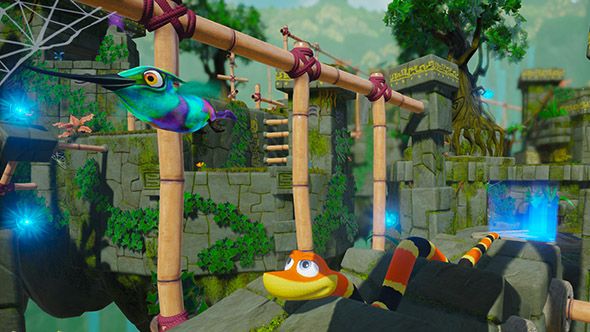 Snake Pass is a highly unconventional platformer, but it has platforming blood in its cold veins. Creator Seb Liese is a former biology teacher and luminary of the LittleBigPlanet modding scene, who moved from Holland to work with Sumo on the physics-y platforming series.

When LittleBigPlanet 3 wrapped, Liese was asked to familiarise himself with Unreal Engine 4, the platform for Sumo’s next big project – the new Crackdown. Using the engine’s Blueprint scripting tool, he set out to create a rope that would swing when a player walked into it. But, forgetting to attach it to the ceiling, he watched instead as it fell to the floor, coiling beautifully.

“I’ve never seen that type of motion before,” Liese thought. “I wonder if I can control that?”

Three or four days later he had a hypnotic prototype of a wriggling, sentient rope – and brought it into work to show a colleague. 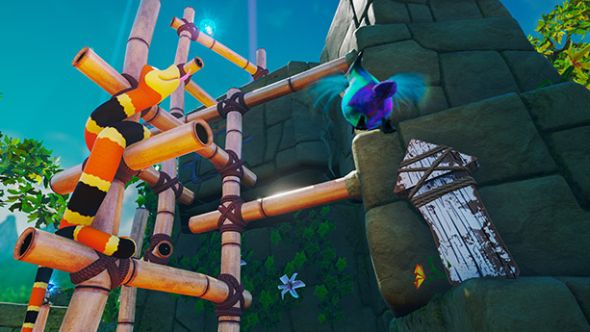 That was nearly a year ago. Since then, Snake Pass has won an internal game jam. It’s upscaled from a game three staffers were intending to drop onto Steam after a month to a 20 something-strong project that’s still ongoing.

The rope has become a snake named Noodle. A snake owner himself, it didn’t occur to Liese that others might find their movements disturbing. But the team have since counteracted the creepiness with a cutesy aesthetic that recalls the best of ‘90s platforming.

Game designers sometimes talk about the ‘feel’ of a good platformer – the perfect set of variables that make Mario buoyant rather than sluggish. Landing on that sweet spot is half science, half sorcery – and for a long time, nobody dared touch Noodle for fear of breaking him.

“The snake has just been this black box,” says Liese. “It’s a really fine balancing act between gravity and friction, and how high a percentage of your body is touching things. All these variables get combined and then divided and then multiplied by a few magic numbers that I sort of arrived at.” 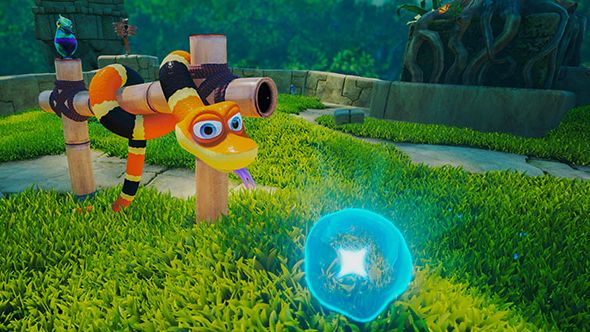 Now at least three coders on the team understand how the snake operates – but it remains a marvel built from reams of script, with no coding at all.

Level design has been another mystery to work out. In a conventional platformer, developers know the prescribed limits of, say, Sonic’s jump. Sumo, by contrast, are at the mercy of snake physics.

“The first hundreds of hours of testing was just done in a tiny little room, where we dropped objects in to see if the snake could handle them,” remembers Liese. “Those objects became more and more crazy every week.”

For every route Sumo design, there’s another playtesters devise on their own. The result is a slithering Spyro the Dragon with the unlikely emergent play of a Dishonored. 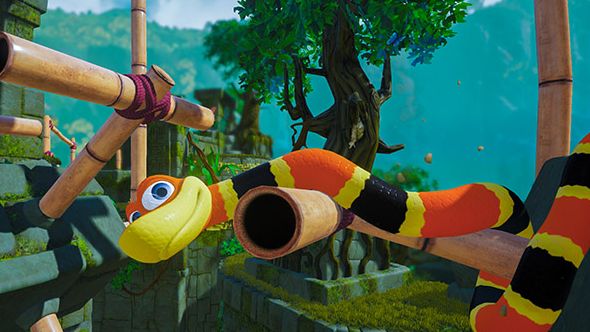 “At the beginning we were always struggling with trying to prevent him from getting places,” says Liese. “But at some point we just had to embrace that he is this slippery guy, and he can get everywhere.”

There’s another secret in Snake Pass, beyond the name. Liese never thought to check the size of the objects he was using to build Noodle. Turns out he’s 30 metres long – his levels giants playgrounds, with a hulking hummingbird sidekick to match. Not so cutesy after all.

In this sponsored series, we’re looking at how game developers are taking advantage of Unreal Engine 4 to create a new generation of PC games. With thanks to Epic Games and Sumo Digital.