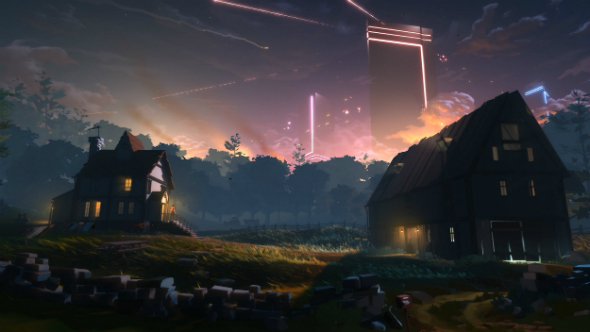 Playdead co-founder Dino Patti has revealed his next project after leaving the Limbo and Inside developers last year. Called Somerville, it’s described as a sci-fi action-adventure game “that chronicles the lives of key individuals in the wake of a global catastrophe.”

If you want more like Somerville make sure to check out the best indie games on PC.

Somerville was originally the passion project of Chris Olsen, a UK-based animator and artist, who started work on it in 2014. By 2016, Olsen had a playable prototype and a proof-of-concept trailer, which he was able to share with Patti, igniting talks of their collaboration.

Fast-forward to yesterday, and Patti and Olsen were able to publicly reveal Somerville with a teaser trailer you can watch below. The pair also announced that they had officially formed a studio together in Guilford called Jumpship.

Being a teaser, the trailer doesn’t show much, but you can see some huge glowing monoliths shooting purple lasers around the countryside in the background of the lengthy shot.

You can see more from the development of Somerville’s prototype over on TIGSource. The GIFs in the devlog show a side-scrolling game in which a character works their way through platforming and shooting challenges against the backdrop of an Earthly invasion.

Patti left Playdead last year saying that he felt lucky to have spent nearly ten years of his life working there and on two brilliant games. “I’m leaving to seek new challenges,” Patti said in a tweet. Now we know what that meant.

Upon his leaving, Patti passed his side of the business over to fellow Playdead co-founder Arnt Jensen, who is now leading a team of at least 25 people on the studio’s next game, which has been teased with an intriguing image.

Expect to hear more about both Playdead and Jumpship’s upcoming projects in the future.