So you want games like Spider-Man on the PC? Us desktop folk can hardly take a peek at social media without growing green like a goblin with envy. Our console compatriots have been gleefully uploading Instagram-worthy photos of their brilliant time swinging around New York City as everyone’s favourite arachnid-base superhero.

PC players and Spidey fans need not worry, though: there are plenty of games like Spider-Man on PC that will give you a taste of Insomniac’s joyous web-swinging gameplay on our home platform. For instance, we can certainly see plenty of Peter Parker’s rhythmic combat system in Rocksteady’s Batman-themed superhero series of Arkham games. What’s more, if you’re not willing to get changed out of your Spidey gear just yet, there are PC games you can play right now that feature your favourite web-wielding hero, such as Lego Marvel Super Heroes.

We might not be playing the very latest videogame incarnation of Spider-Man, but we’re here to help you find the next best thing. So, without further ado, here are the best games like Spider-Man to sate your Spidey senses. 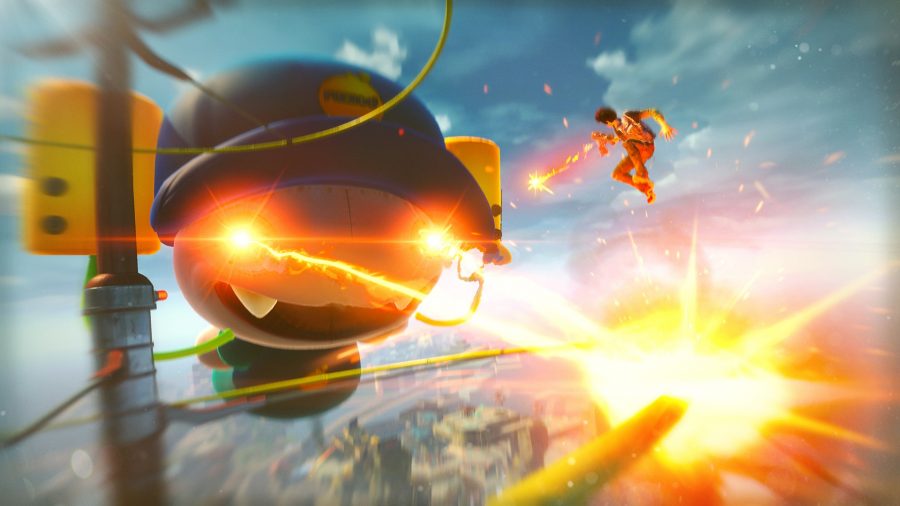 One of the core appeals of any Spider-Man game is the feel of tumbling through the sky at high speed. To that end, it would be remiss of us not to include Sunset Overdrive in this list – a zany game that sees developer Insomniac perfect their aerial formula. In this bright action-adventure game, you’ll find yourself in the zippy shoes of a FizzCo employee facing a wave of mutants infected by the company’s energy drink Overcharge Delirium XT. At least it’s tastier than being bitten by a spider.

What makes this feel like a Spider-Man game is its amazing sense of momentum. As you dart through Insomniac’s colourful metropolis of Sunset City and hit the ground, you’ll be straight off again in the blink of an eye. Sure, Sunset Overdrive will have you trading web slinging for rail-grinding, but it is its wondrous physics that make its thrilling parkour stand out. It isn’t surprising that Insomniac’s Creative Director has credited the game with laying the foundation for our friendly neighbourhood web slinger.

Where Spidey gradually develops his silky skills without firing a shot, Sunset Overdrive gifts you a ridiculous arsenal of them with which to wreak havoc. Firing an explosive teddy bear into a horde of mutants just never gets old. Perhaps a tad more joyful than it should be. 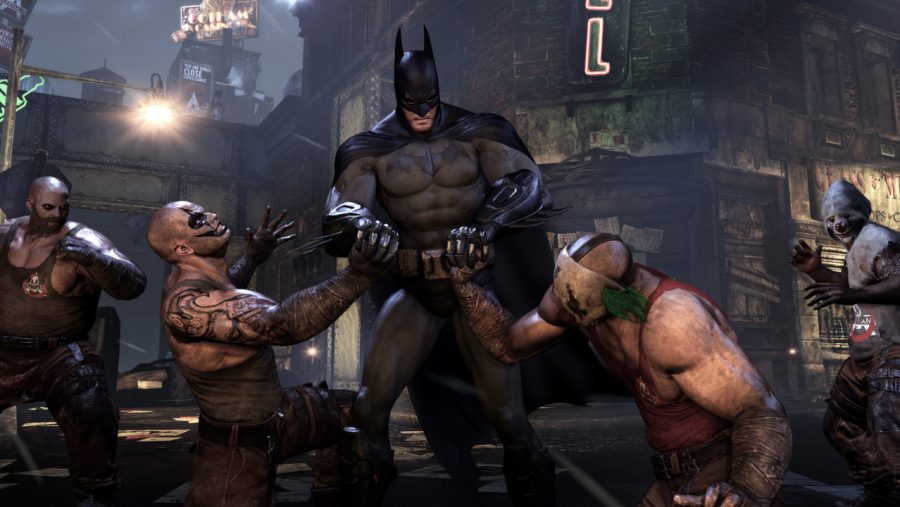 If you’re looking for games like Spider-Man, the Batman Arkham series should be your first port of call. Batman: Arkham Asylum kicked off the trilogy and made superhero games cool once more in 2009, but it’s the sequel that’s most reminiscent of Peter Parker’s newest romp.

This is due to Arkham City taking place in an open world, er, city, rather than the more confined but still extraordinarily detailed asylum for the criminally insane. You can have a great time gliding around it, employing the grappling hook to regain the height you lose, and then pouncing on unsuspecting criminals from above. Bats also has his own Spidey Sense equivalent, and is just as good – if not better – than Spidey when it comes to dishing out combos of punches, blocks, and counters.

Arkham City also features an excellent cast of goodies and soon-to-be-busted baddies, so long as you can stomach the move from Marvel to DC. Included are the likes of Catwoman, Oracle, Penguin, Joker, Harley Quinn, and Two Face. All of them weaved into a great story that feels as good as most superhero comic runs. 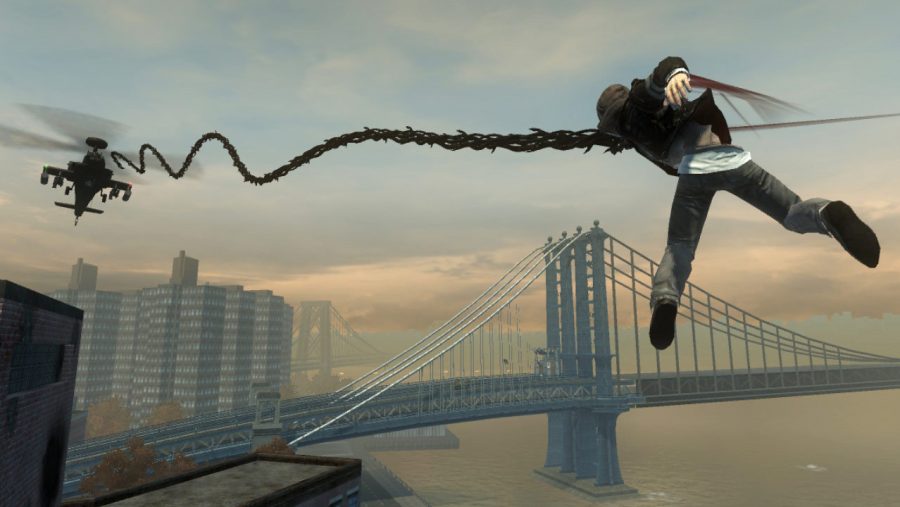 The main appeal of Marvel’s Spider-Man is how you get around. Much of the same goes with Prototype. Instead of Peter Parker, you play as Alex Mercer – a decidedly moody man who wakes up without any memory of how he acquired his powerful shapeshifting abilities. From combat to movement, Mercer boasts a moves list as long as Spider-Man’s, as he vertically runs up skyscrapers and leaps off them with equally reckless abandon.

More good stuff: Pack your bags for these open-world games

Prototype even shares Spider-Man’s playground of NYC, so if you squint while you play this 2009 release, you can even pretend it’s the same game. Almost. One feature that does mark Prototype as markedly different is Mercer’s massive arm blades with which he’s able to put his foes to the kibosh. Don’t expect as cheery a protagonist as Pete, either: Mercer is more of an anti-hero, so much so, in fact, he serves as the big bad of Prototype 2. Prototype could act as the template for a future Marvel’s Venom game. Here’s hoping. 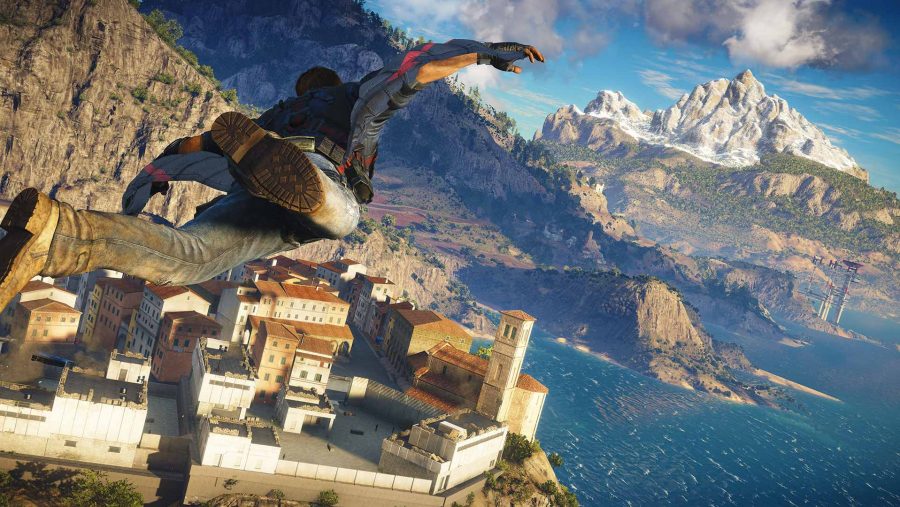 Just Cause 3 sees Rico Rodriguez return to what he does best: dispatching baddies with a massive goody bag of tools while flying effortlessly through the air. Sound familiar? The fictional island setting of Medici is a noticeably different environment to zip through than the concrete jungle of New York, but using Rico’s wingsuit and grappling hook is just as enthralling as Marvel’s Spider-Man.

You take on the evil forces of DRM – that’s the Di Ravello Militia, before the witty among you rush to the comments – which provides a literal as well as emotional pull for you to use your tether device to yank explosives into the path of restrictive digital copyright… erm, we mean militant bad boys, and vice versa. That’s just the tip of the iceberg, though, as you can provoke from the top of mountains, from the air while attached to a helicopter, or as you race jet skis across tropical waters. And, in case you’re all finished with this entry, use our Just Cause 4 review to see if you’re up for another dose of open-world adventuring. 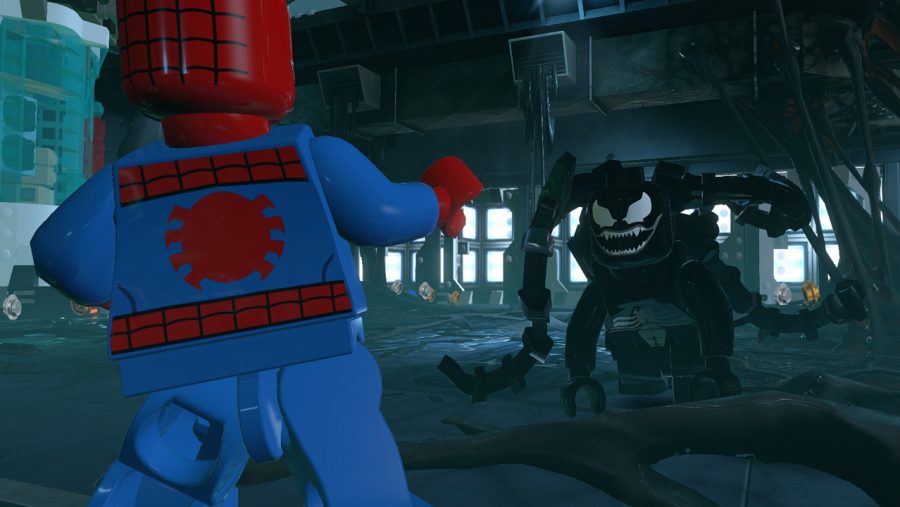 We’re not sure if missing out on Marvel’s Spider-Man is more painful than stepping on a Lego brick but, if you’re dead set on swinging through New York as Spider-Man on PC, then Lego Marvel Super Heroes is your best bet. By 2013, Traveller’s Tales got its Lego games formula down to a tee so that its take on the Marvel universe become one of the best games in the Lego series.

Due to the bulging roster of heroes and villains that make an appearance, you don’t get as much of your favourite wall crawler as you do in Marvel’s Spider-Man, but you do get the breadth of Manhattan to swing through, as well as a chance to poke around the S.H.I.E.L.D helicarrier. Fans of the Lego games will know what to expect – it’s a zany take on the Marvel franchise with enticing co-op gameplay and lots of collectibles – but it’s also the best way to swing around NYC as Spider-Man on PC, albeit in a blockier form. 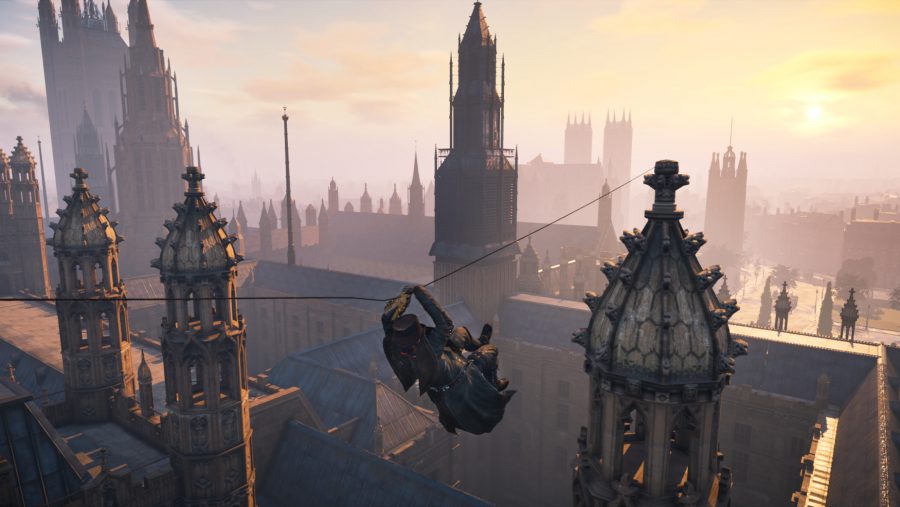 The Assassin’s Creed series has been very influential when it comes to open-world game design. But it’s Syndicate, Ubisoft Quebec’s Victorian London adventure, that’s most redolent of Marvel’s Spider-Man.

The towers that reveal the surrounding area on the map, and that first appeared in the inaugural Assassin’s Creed game, find their way into Marvel’s web fest. But the similarities to Syndicate go further, as the tools you use use to traverse London, plus the tone of the story, has it resemble Insomniac’s take on the famous webby hero.

Syndicate’s dual protagonists Jacob and Evie Frye, stab and sneak their way through one of the most charming and eccentric Assassin’s Creed narratives to date. It certainly has some of the cheek of Spider-Man, and you get to bust ghosts and blow up drug labs with two of the most celebrated called Charles in history: Dickens and Darwin.

But it’s the introduction of the Rope Launcher grappling hook that gets our Spidey Senses tingling. It might not be as flexible or fluid as Insomniac’s traversal system, but it remains a useful way to scale London’s landmarks and to zip across this large and dense turn-of-the-century city. That said, it does lack the freedom of Ubi’s Greek adventure, Assassin’s Creed Odyssey, one of our personal favourites of 2018.

There you go, six games like Spider-Man you can play on PC right now. Insomniac’s 2018 masterpiece was available via PS Now on PC at one point, but it currently looks like it’s been removed from the service for the time being. We’ll keep an eye out in case it makes a comeback.

Still, there’s always plenty more for you to find in our best sandbox games and best PC games lists, and you can always stick a Spider-Man film on while playing the games featured in this roundup, right? Just don’t make it Spider-Man 3, whatever you do.