The world has comic book fever. Look around and you’ll see it: everyone’s BIFF-ing and POW-ing each other out of the way in hunt of the best superhero games. People with towels pegged to their shoulders dive into stores, searching with non-X-ray-vision for the best DC games, while those swinging a red, white, and blue painted bin lid peruse the internet for lists of the best Marvel games.

And look, you’ve stumbled over such a list, oh mighty Captain Trash-Can. A list so powerful that Doctor Doom no doubt has his eyes set on it with plans for word domination via videogames. If such a thing is possible… (who knows what modern Latverian technology is capable of).

Before this feature spirals off into an inescapable whole of comic references, here is our list of eight great superhero games you can play on PC. That’s enough super-powered goodness to keep you happy until the next blockbuster lands.

The best superhero games are: 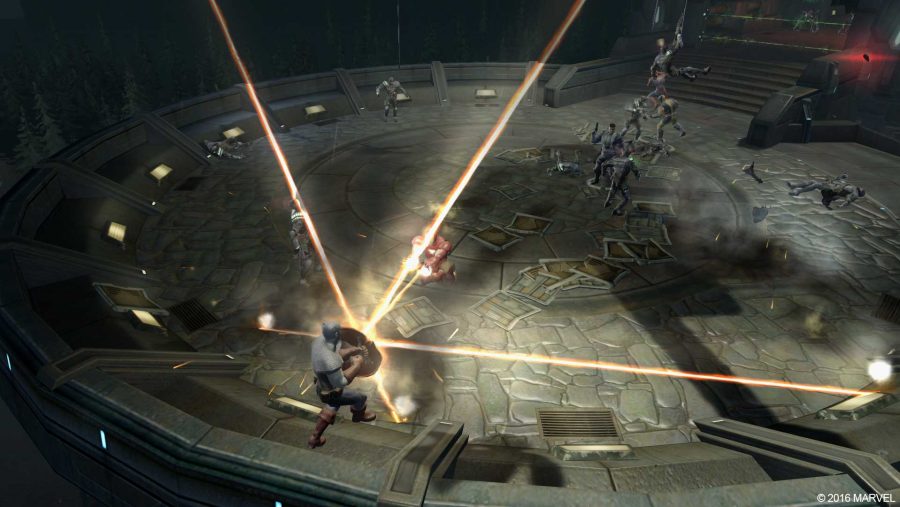 Infinity War is one of Marvel comics’ largest crossover events. In 1992, it brought together dozens of superheroes to team up against Thanos and his impossibly powerful Infinity Gauntlet. It’s a classic story of uniting against impossible odds. Sometimes, though, heroes don’t see eye to eye. Instead of working together, they begin to fight among themselves. This was the focus of the famous 2006 Civil War storyline. But not only was this the basis for an immensely successful Marvel movie, this event was also rendered in playable form in Marvel Ultimate Alliance 2.

An isometric brawler with just a hint of Diablo to it, Ultimate Alliance 2 asks you to put together a group of four heroes and fight for their side of the Superhero Registration battle. While your objectives are simple dungeon-crawling fare, there is surprising depth to the combat system. Every character has a unique Fusion ability that alters depending on who they’re teamed up with. So, for example, Storm can fire lighting bolts towards Captain America, who will then deflect them off his shield and into the path of their enemies.

With a roster of over 20 characters there’s a colossal number of combinations to discover and make use of. The big question, of course, is can Hulk do a fastball special with Wolverine? (Yes, he can, and yes, it’s awesome). 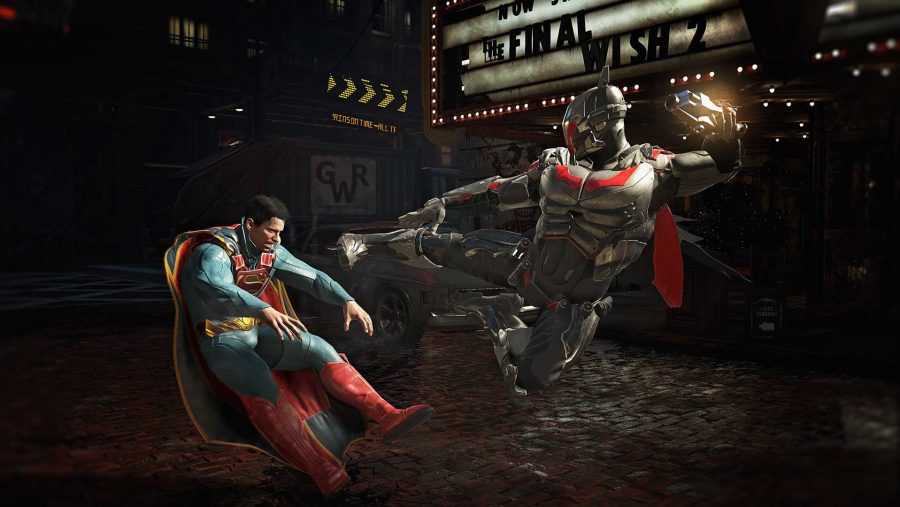 If superheroes beating seven bells out of each other is what you like then there’s no better example than Injustice 2. A fighting game based on DC comics, it reimagines Batman’s universe as a world where Superman went bad. Yep, prepare yourself for a gleefully bonkers plot.

Injustice 2 is perhaps the best presented fighter ever made. Ludicrously well-produced cutscenes tell the story, which feels notably on-the-button with recent favourites like Supergirl, Green Arrow, and Black Canary taking major roles alongside Batman and Harley Quinn. Each new chapter quickly introduces new perspectives and classic locales from the DC universe, making this a speedy round trip of several decades of comic book history.

In battle, characters hurl each other through the scenery with a sense of weight and power rarely seen in games. The fight engine itself is deep, but even a button-masher can easily activate some absurdly entertaining abilities, such as The Flash catapulting an opponent through time and smashing them into the Sphinx’s nose. 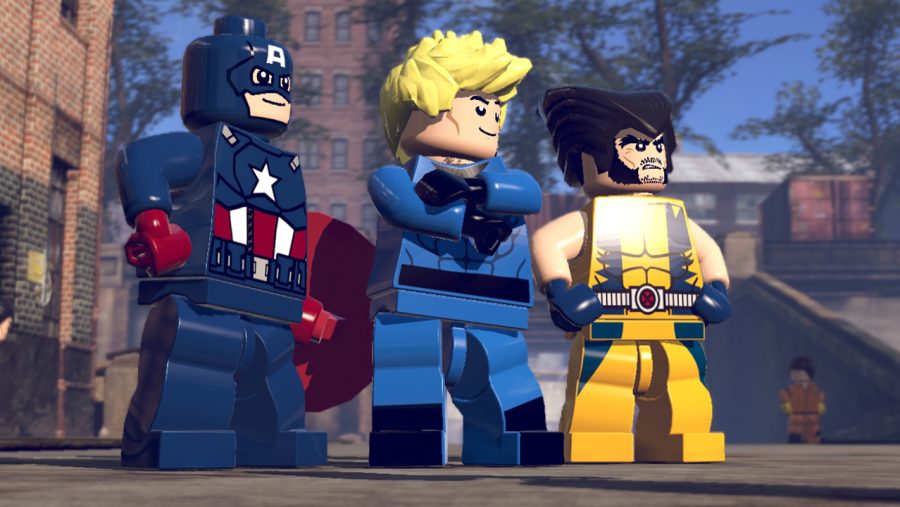 Comic book movies have a habit of going a bit dark and moody. If you’re seeking something with a more joyful tone then Lego Marvel Super Heroes is here to save you. As far as gameplay goes it’s entirely Lego as usual: puzzles block your path through the world, and so you’ll need to smash the scenery before rebuilding it into useful contraptions to help you advance. But it’s the Marvel charm that will captivate you.

The beauty of Marvel Super Heroes is the richness of the universe it draws from. There are untold hundreds of nods to the Marvel comics, cartoons, and films, with various levels of humour aimed at both those fully learned and entirely new to the world. And, since the game draws several cues from the cinematic interpretations of the characters, this is probably the only place you’ll ever see the movie X-Men mansion in the same city as the MCU Avengers Tower and Sony’s Amazing Spider-Man Oscorp building. We know, right? We can hardly keep calm about it ourselves. 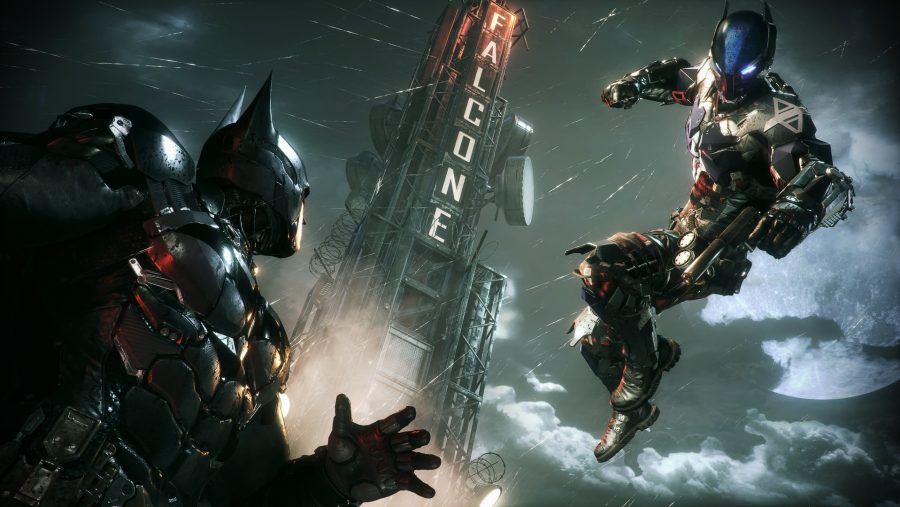 Rocksteady’s Batman Arkham games are undisputedly in the very top tier of superhero games, but which of the series is best? Asylum or City? Well, neither actually: it’s Arkham Knight.

Yes, yes, we know it launched in an absolute state on PC and it took an absurdly long time to fix, but now it’s playable it absolutely deserves the crown. Of all the Arkham games, Knight is the one that feels most like a Batman comic. Rather than attempting to crowbar every villain into the story like a conveyor belt of evil, the final game in the series focuses on Scarecrow and the mysterious Arkham Knight. This results in a more fundamentally satisfying plot, and really demonstrates Rocksteady’s writing talent when it comes to twists – even if they were entirely expected.

As for Batman’s other famous adversaries, they all get their own limelight in side-quests. This aids in making Gotham – which is now fully explorable – feel like a city plagued by pockets of independent crime.

We’ll admit that the tank Batmobile bits are pretty naff, though. Quite how Rocksteady managed to mess that up is a mystery tougher to crack than a Riddler trophy. 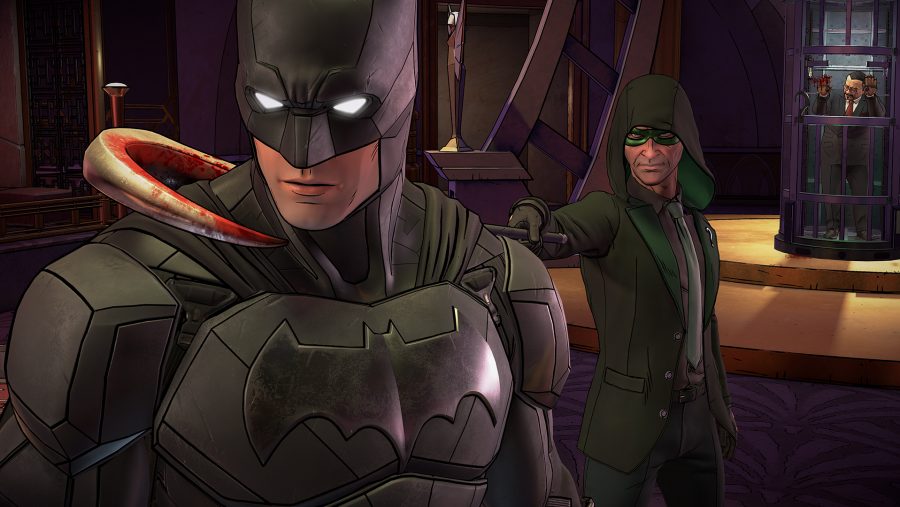 The Arkham games focus entirely on the exploits of the Caped Crusader, but what of the man beneath the cowl? The moral quandaries of Bruce Wayne are the territory of Telltale in their retelling of the Batman universe.

Over five episodes, Telltale’s Batman has explored the nature of Wayne’s dual personality, and his obligations to the city of Gotham. Several points of the story demand that you choose between sending Bruce or Batman to a situation: essentially a choice between social influence or terrifying violence. As Bruce, such a situation plays out in the traditional Telltale formal: multiple dialogue choices and timed responses, with the wrong answers potentially leading to disaster. As Batman, the adventure game riffs more on his role as a detective than a Knight, using his gadgets to analyse evidence and intellect to connect clues.

Perhaps its biggest pull, though, is the fact that it’s set early in Batman’s career. So early, in fact, that you’ll be witness to how each of his actions mould the rise of his archenemy: the Joker. 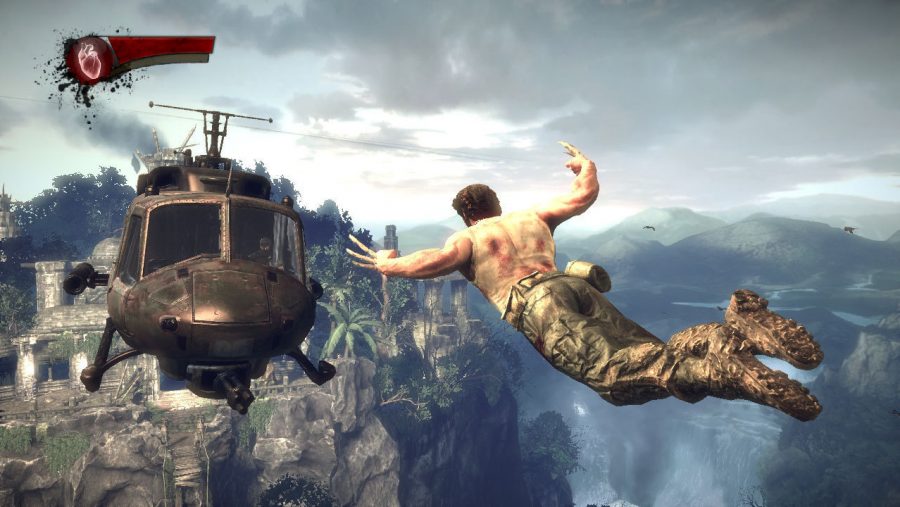 No, don’t laugh. We’re well aware that X-Men Origins: Wolverine – The Movie isn’t only the worst X-Men movie, it’s one of the worst superhero movies ever made. X-Men Origins: Wolverine – The Game, on the other hand is somehow fantastic. It’s a third-person action-brawler that finally allows Wolverine to cut loose and get proper bloody, with plenty of brutal kills that send limbs flying.

It’s adult and messy in a way that the movie series didn’t get until Logan, and even then that only shows us the older Wolverine – slower and pensive. In this game we get Wolverine in his prime, carving up enemy soldiers like a wild animal, his full power under your control at last. At one point he pulls a helicopter pilot out of his seat and uses the chopper’s blades to cut the guy’s head off. There’s nothing that cool, or horrifying, in the movie.

Developer Raven Software also wisely retells the movie’s nonsensical storyline, taking only a few beats from it, and keeping hold of Hugh Jackman as the lead. Even the final battle against the Deadpool wannabe is great. Oh, and while X-Men Origins: Wolverine – The Game isn’t available digitally, a physical copy will run fine under Windows 10 64-bit. 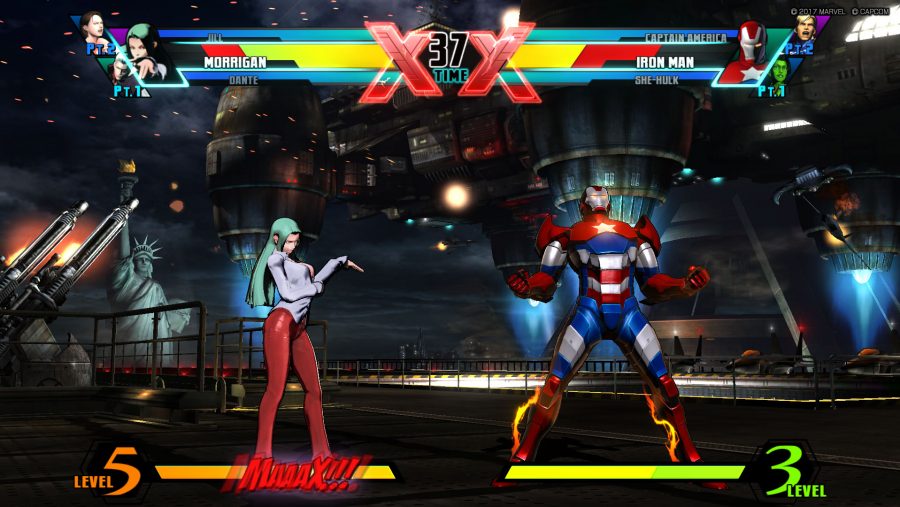 When Marvel Vs Capcom: Infinite launched, there’s a reason why fans gave a collective shrug – everything the new game offered, Ultimate Marvel Vs Capcom 3 already had. It did it better, too.

The slightly-off 3D character models of Infinite are disappointing compared to the cel-shaded gorgeousness of Ultimate Marvel vs Capcom 3, which provides the perfect comic-book-look. With a cast of 50 playable characters, pretty much every major Marvel hero is represented in this renowned fighting game. Front-and-centre are the X-Men, who are totally absent from Infinite thanks to the ever-complicated licensing issues at Marvel.

Better than just the roster, though, is the fact that the gameplay of Ultimate Marvel vs Capcom 3 is just so much fun. The signature Marvel Vs Capcom tag-team battles are really entertaining, with three characters combining their talents for some slick, super-powered punch-ups. While the PC version does admittedly have some online issues, it makes up for it by having tons of great character mods. Add Psylocke, Green Goblin, or even non-Marvel heroes such as One Punch Man, the Joker, and Harley Quinn to the mix and you’ll soon forget that the most recent game in the series didn’t even have Wolverine. 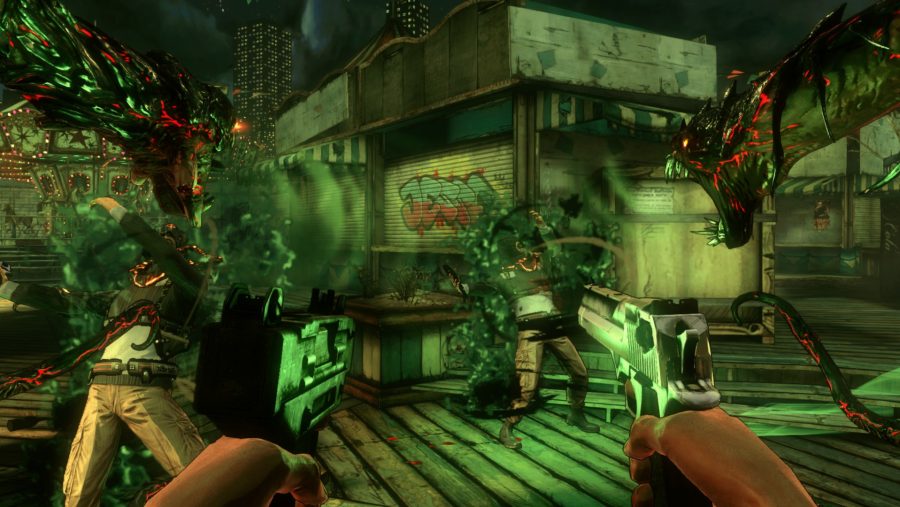 Yes, comic book superhero games aren’t exclusive to Marvel or DC, and yes, other comics publishers can get great games too. We’re still waiting on 2000AD and Rebellion to make the perfect Judge Dredd game – please, oh please. But, in the meantime, Top Cow’s The Darkness series already has two superb shooters, which should easily tide you over. Sadly, the first game from Starbreeze isn’t available on PC, but the sequel from Warframe developer Digital Extremes is – and luckily it’s a thrill ride.

On target: The best FPS games on PC

You play as Jackie Estacado, born into a mob family but wanting nothing to do with it. The first game kicked off with the murder of Jackie’s girlfriend and his embrace of The Darkness – a demonic entity that gives him superpowers. The sequel places Jackie as the head of his mob family as he’s forced to bring back The Darkness after he becomes the victim of a brutal attack by someone looking to steal his powers.

What follows is one of the most entertaining and gory shooters around, as guns prove secondary in importance (and fun) to Jackie’s dark powers – which let him grab enemies and tear them in two, and impale people against a wall with a parking meter. The cel-shaded graphics are a great nod to the game’s origins and go towards making it a must-play if you’re a fan of first-person shooters or comic books.

And that’s your lot. Eight fantastic superhero games, each worthy of your time and dedication. All you need to decide now is exactly how you’ll save the world: via the detective mind of Batman, the witty quips of Spider-Man, or the demonic, blood-thirsty tentacles of Jackie Estacado? It’s all up to you. But remember: with great power comes great responsibility, so use your powers wisely. Such as the power to click on this link to the best games like Marvel’s Spider-Man, which will provide even more super-powered antics to fool around with like the responsible hero you are.