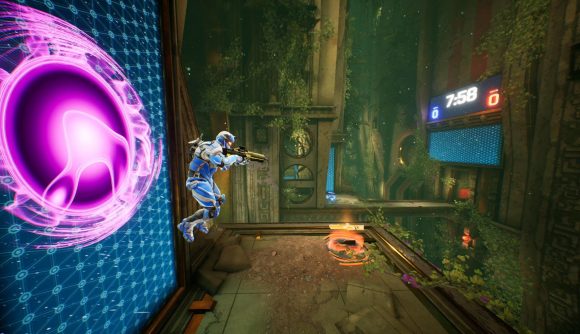 Splitgate got so popular over the past month that the devs have had to delay its 1.0 release in order to increase server capacity, but the game’s explosion hasn’t slowed down since then. The servers were having a rough time keeping up with the influx of players, leading to queue times over an hour in length, but another round of upgrades appear to have made the waits much more reasonable.

“Our update last night has allowed us to make huge capacity and stability improvements,” the devs reported on Twitter last night. “That means shorter queue times!” And, indeed, queue times have decreased dramatically. The current queue estimate sits at 20 minutes, just as the game has reached a new concurrent player count record of 67,165, and the times have been as short as, well, nothing.

While Splitgate has been available on Steam in Early Access since 2019, the current surge began on July 28, as SteamDB shows. The game reached a peak of 28,342 concurrent players on PC as of July 30, the same day the developers reported that the overall, cross-platform player number crossed 100,000 concurrents.

As a result of all these players, both fans and the devs had been reporting queue times in excess of 90 minutes. The subreddit was recently filled with jokes about the current state of the wait, but it looks to be mostly in good fun – players are largely happy just to be able to get into the game at all.

The devs have launched a new Twitter account to track Splitgate’s server status, and provide queue time details on the official Discord. (The Discord, ironically, has often been completely full, too.)

Thanks for being patient <3

For some FPS games to play while waiting to log into Splitgate, you can follow that link.