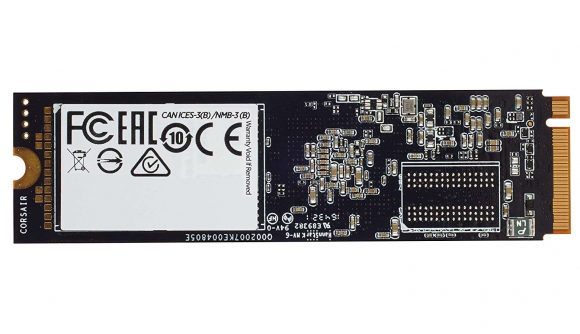 It’s not all new Radeon VII graphics cards, Intel processors, and fugly laptops at this year’s CES trade show out in dusty, grubby Las Vegas. Oh no, there are SSD things afoot too. Phison has been out under the bright lights of Sin City to demonstrate its new PCIe 4.0 SSD controller, the catchily titled PS5016-E16. Trips off the tongue that one, eh?

But memory controllers for SSDs have rarely had cool names, well not until Samsung got giddy about its latest and called it the Phoenix anyways. But they are the often unsung heroes of solid state storage, with so many folk purely focusing on the actual memory, whether it’s TLC, MLC, SLC, or some weird mixture of all three. But the memory controller is the thing that ties it all together, that allows the high-performance NAND Flash memory to run at its fastest across whatever interface the drive’s attached to, be it SATA or NVMe.

And the latest PCIe 4.0 Phison controller is promising to be able to deliver sequential access speeds of around 4,000MB/s second, and actually pretty significantly higher.

Samsung’s 970 Pro is the fastest SSD we’ve tested, offering peak sequential read speeds of 3,438MB/s, but that’s over the current PCIe 3.0 interface. With the PCIe 4.0 interface offering theoretical bandwidth of around 8GB/s the Phison controller is promising to introduce a new level of SSD performance when it gets out of the labs.

The CrystalDiskMark benchmark that Phison has been showing off at CES has a 250GB SSD running over the PCIe 4.0 connection at 4,072 MB/s and 4,244 MB/s for its read and write speeds respectively. That’s pretty darned quick for an early demo, and as low capacity drives often perform slower than their more capacious counterparts you might expect 500GB and 1TB SSDs to run even faster. 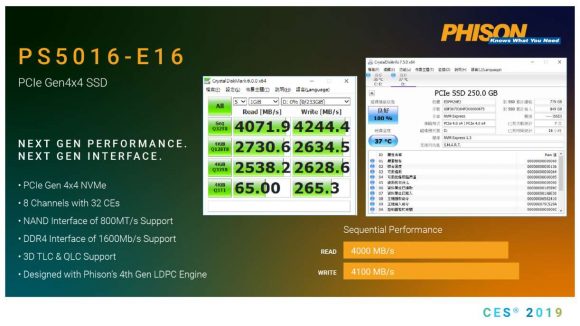 The Phison controllers are used in a host of different SSDs, from Corsair to Kingston, and this will allow companies without the resources to build their own memory controllers to compete at the highest level with Samsung and Intel. With 3D TLC and QLC support the next-gen Phison silicon offers a lot of versatility to companies.

So, when is it getting out of the labs? At the moment there aren’t any consumer-level platforms actually operating with PCIe 4.0 compatibility, but AMD has just announced that its 3rd Gen Ryzen platform is going to have PCIe 4.0 support. Though that PCIe 4.0 is potentially able to be patched into existing AM4 Ryzen motherboards, it sounds like it’s only going to be for the main x16 PCIe slots.

That would mean you’re going to have to wait for the X570, and potentially Ice Lake, motherboard platforms before you have any support for next-gen SSDs. And even then it might be a while after the Computex launch of 3rd Gen Ryzen before new PCIe 4.0 solid state storage is available to consumers.

Though Phison isn’t the only company set to be working on next-gen SSD controllers – you can bet Samsung is, aiming to continue its solid state dominance, and the likes of Intel, Marvell and Western Digital are all likely to be beavering away on supporting silicon too.

So, who’s going to get there first? My money’s probably going to be on someone from Korea…