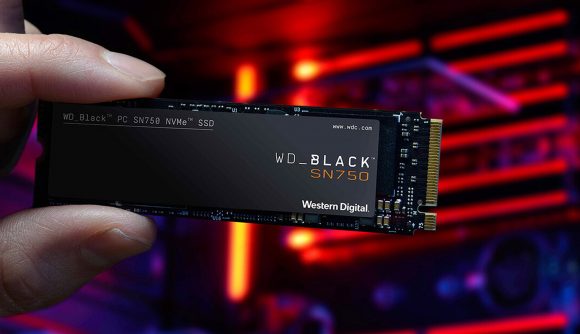 The best gaming PC isn’t complete unless it’s paired with one of the best SSDs for gaming and a report from Trendfocus shows PC builders and consumers are certainly heeding that advice. Throughout 2020, SSDs outsold conventional hard disk drives, shipping 333 million over the 259 million its mechanical counterpart managed to shift last year. That’s a whopping 207 exabytes and 1.018 zettabytes of storage space respectively.

To put this in perspective, you could download Call of Duty: Modern Warfare more than 843 million times, house around three billion Cyberpunk 2077 installs, and fit Fortnite almost 13 billion times if you had access to all that SSD space – not all at the same time of course, that’d be ridiculous.

Hard drives aren’t dead by any stretch, either, with 1,018 exabytes of shipped storage space, equivalent to about one trillion Valheim installs. Despite being slower, they’re likely to remain popular for a while yet, with their low price-per-gigabyte ideal for storing large games or video libraries without breaking the bank.

SSD sales have increased by 20.8% since last year, whereas hard drive sales have dropped 18%. Despite less hard drives being shifted, the total capacity of HDDs sold in 2020 still overshadows that of typically lower-capacity SSDs, which are often far more expensive. But since one exabyte is equivalent to one million terabytes, we’re not dealing with rookie numbers in either instance. We expect the total capacity of SSDs to be significantly higher next year though, as it’s currently increasing 50.4% year-on-year.

So, with SSDs getting ever more popular, let’s hope the rumour that SSD controller modules could be in tight supply doesn’t lead to the same stock issues we’ve seen with graphics cards throughout 2020 and 2021.

And with PCIe 5.0 on its way, even faster SSDs will be in a PC near you soon, giving them a further boost against conventional hard disk drives.