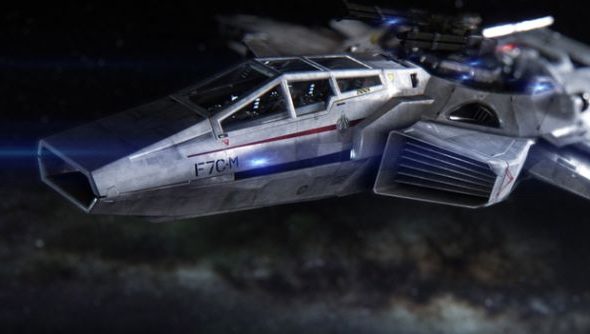 As part of a Gamescom promotion, Star Citizen is letting anyone who wants to sign up for and download the Arena Commander module of its current beta client. This is the part of the game that lets you fly around a bit and shoot others online or bots in single-player. It’s still early on, but it’ll give you a handle on the flight module and possibly convince you to drop some star credits, if you’ve held off so far. To do so, simply use the code GAMESCOM2015 on that page as detailed in this Reddit thread.

Naturally I decided I’d give it a shot, since I enjoy both spaceships and laser beams, and fired it up. After downloading the launcher it took complete hog of my fairly meaty internet connection for a good twenty minutes while I got dinner. Then while I ate dinner I watched a loading screen. Just as I finished, my screen cut to black for ten minutes before I pressed the power button. It then took another ten minutes to get to the shut-down screen, where an error dialog hiding behind it was preventing the computer actually powering off. Now it’s rebooted, Chrome no longer seems to be recognised as a web browser or, indeed, a functioning program.

Clearly still an alpha test, and one my aging rig can’t handle the weight of. Star Citizen had a fairly big Gamescom, announcing multi-crew shipsand a social moduleplus good old Chris Roberts letting us know what he thinks of Derek Smart. Spoilers: it’s not a lot. There’s also been significant moves made on the Star Marine front, the FPS portion of Star Citizen.

What do those of you who’ve had more access think of the current state of Arena Commander? Most people outside of the official Star Citizen forums (which, last time I was there, were a bit of a hive) seem quite happy, if anxious to play more and see it evolve further. You can tell us what you think of Derek Smart or, indeed, Chris Roberts too, if you like.