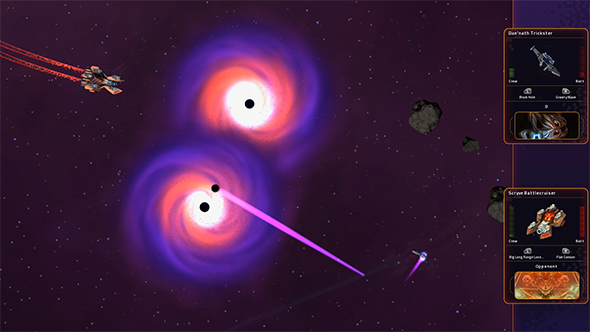 Update, November 24: The Star Control: Origins beta has already taken flight to let you test out ship vs. ship combat, and will be getting a series of updates over the next few weeks.

The Star Control: Origins Super-Melee beta launched last week, offering a preview of the game’s combat systems.  You can compete against either AI opponents of varying difficulties or other players online, building fleets out of a point buy system. You’ll also have access to the Ship Crafter, where you can build your own vessels and share them via the Steam Workshop, taking them to battle in custom games.

For more intergalactic adventures, check out the best space games on PC.

An update will hit the beta on November 30, addressing balance issues brought up by the community and fixing bugs, lag, and connectivity issues. On December 14, another update will hit making more substantial gameplay changes brought by community feedback, as well as some new ships to play around with. This second update is also planned to feature local multiplayer so that you can challenge friends and family to space battles over the holidays.

This is still a closed beta intended for early purchasers of the game, which is currently available through Steam, GOG, and the official website for $29.99 / £23.79 / €29.99. Stardock also want to make clear that this is a beta rather than a demo, with all the rough edges that this distinction implies.

Update, October 19:It’s been more than 20 years since the last Star Control release, and just over a year since Stardockofficially announcedthe Star Control: Origins follow-up. Now it’s inching closer to reality with proper pre-orders and some details on the beta due to drop next month.

You’ve been able to buy in on the new Star Control for a while now thanks to founder’s packs, but this is the start of normal pre-orders through Steam and GOG. Early purchases can be had for $24.99 / £19.49 / €24.99. Whether you bought a founder’s pack or one of these pre-orders, you’ll get access to the Super-Melee beta starting next month.

Super-Melee will have you create a fleet of ships, each of which have their own unique abilities, taking them into battle either against AI or in online multiplayer. The beta will also include the Ship Crafter, letting you design your own vessels from their look to the specifics of their weapons, defenses, and engines, and share them with other players.

If you’re still jonesing for old-school Star Control, the original games are also now available on Steam. Star Control: The Ur-Quan Masters bundles the first two games together, and Star Control: Kessari Quadrant is the third title. The GOG releases have been rebranded to match the new names, as well.

We don’t have specific release dates yet, but the Super-Melee beta is scheduled to begin next month, while the game’s full release is set for some time next year.