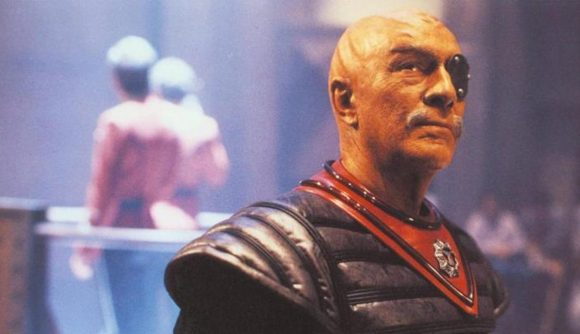 Players in Star Trek Online are coming together to pay tribute to the late actor Christopher Plummer, who passed away this week at the age of 91. Plummer had been cast in a prominent role in one of the Star Trek movies, and the community in the MMO game is honouring his performance and legacy.

On Friday, the space game‘s official Twitter acknowledged Plummer’s passing, writing: “In the hands of a lesser actor, General Chang might have been a stereotype, a one note character. But Christopher Plummer brought a gravitas and a respect to the man that defined Klingons for ages to come. Rest in peace.” Since then, players from across Star Trek Online have been hosting send offs, gathering at the in-game murals that acknowledge the cast and crew of the various TV shows and movies.

One such obvious spot is Qo’nos, home planet of the Klingons, where a number of players stood in line holding torches for a moment. Plummer appeared as General Chang, the main antagonist in 1991’s Star Trek IV: The Undiscovered Country. The movie is one of the more liked Star Trek films, and as it was the last time the central crew of the original series came together, it holds a certain soft spot for many fans. He reprised the role for 2000’s Star Trek: Klingon Academy, a flight sim set in the universe.

Other players held a moment for Plummer on Deep Space 9, the spacestation that’s the namesake for the show. Tributes are still being posted online, even after the initial surge.

In the hands of a lesser actor, General Chang might have been a stereotype, a one note character. But Christopher Plummer brought a gravitas and a respect to the man that defined Klingons for ages to come. Rest in peace. pic.twitter.com/AwCr7ESy1a

Here’s the gathering on Qo’nos:

Here’s the tribute on Deep Space 9:

In honor of the passing of the great Christopher Plummer, we gathered at the memorial on DS9 to pay tribute to one of the greatest Klingon warriors. pic.twitter.com/HdEYyJCxKy

Aside from venturing where no man has gone before, Plummer’s filmography included roles in The Sound of Music, Waterloo, The Man Who Would Be King, and this century, Dracula 2000, All The Money In The World, and Barrymore. He also appears in The Elder Scrolls V: Skyrim, making his limited videogames career quite the prolific one.