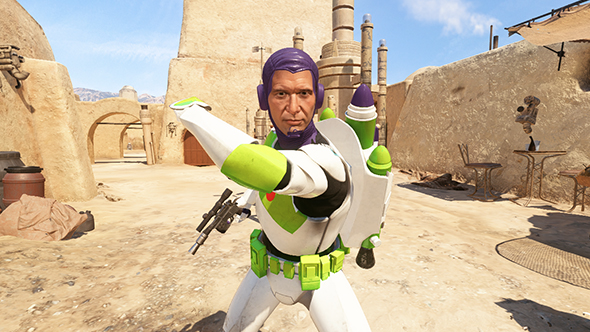 The fact that Disney now owns most of the world’s most popular entertainment properties might not be the best thing for competition in the field, but at least it means the potential crossovers within the company can get even crazier. This mod (brought to our attention by Kotaku) showcases one such possibility, taking the seemingly obvious step of turning Han Solo into Buzz Lightyear.

Have a look at the best multiplayer games on PC.

Mostly, FruitByTheFett’s mod – that is an excellent screen name, by the way – serves as a reminder that some green and purple paint soon make your favorite Star Wars armor appropriate for Pixar-designed living toy.

Your new Buzz Lightyear will replace Han Solo and all light side jet troopers in Battlefront II. The mod’s maker promises it works in both solo and multiplayer modes, and will not get you banned.

I look forward to the inevitable battles between Buzz and pink Darth Vader, while we all giggle at the quaint notion that nobody wants canon-breaking cosmetics in their Star Wars experiences. It also confirms Harrison Ford must be cast in the inevitable live action Toy Story reboot, where the toys are portrayed by humans and the humans are CG.