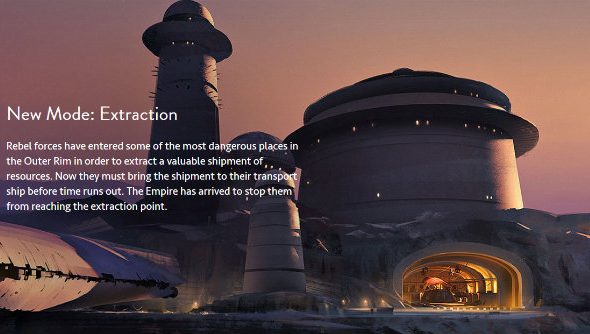 While you’re waiting for the expansion, have a little look at our lovely list of PC’s best FPS games.

Star Wars Battlefront’s Outer Rim expansion will have players fighting among the factories of Sullust and battling within Jabba the Hutt’s palace on Tatooine, letting you get shooty as the usual assortment of Rebels and Imperials, as well as granting you access to two “iconic” new heroes: Greedo and Nien Nunb.

There’s also a bunch of new weaponry, and new game mode called Extraction. Here, Rebels have to grab a shipment of resources and get it to the extraction point, while Imperial soldiers have to try shoot them in their faces before they can. Full details can be found over on the official site.

It’s quite funny watching that. While it’s a well crafted trailer, seeing Greedo and Han Solo face off for a bit of fan service in Jabba’s palace flies in the face of what EA said about not being able to do The Force Awakens content because it would violate universe canon. Suppose they have to save something for the sequel to tie into the next film.

Outer Rim, which is available as part of the Season Pass, launches some time this month